The NFR Project #51: 'Civilization,' the anti-war film that got Woodrow Wilson reelected

What do you do when you want people to hate war? You make a war film, of course.

Civilization is a big-budget extravaganza that relates intense pacifist sentiment. It’s an attempt to reinforce the strong isolationist feelings of much of the American public before the country joined World War One. Like its parent cause, the film fails.

The conflict broke out in the summer of 1914, but then-President Woodrow Wilson successfully led efforts to keep the U.S. neutral, even after such incidents as the sinking of the British passenger liner Lusitania in May of 1915 (of the 1,198 casualties, 128 were American citizens). The bulk of the American public had no desire to go to war, and those who did were typed as allies of “war profiteers.” In 1916, Wilson was reelected, using the campaign slogan “He kept us out of war.”

Screenwriter C. Gardiner Sullivan was inspired to write the story on Easter, 1915, and pioneer film mogul Thomas Ince thought it was worth a lavish realization. At a reported cost of $1,000,000 (in reality, more like $100,000), it was a huge popular success, and may have helped Wilson win the contest over Charles Evens Hughes, which was decided by the narrowest margin of victory in a presidential election until 2004.

The film is told in that worst of all narrative forms, the allegory. The heavy-handed symbolism is inherently condescending, making pacifism and idealism seem like uncomfortable affectations. An unnamed European power goes to war. Inventor Count Ferdinand invents a fine new submarine, and captains it. When faced with torpedoing a Lusitania-like ocean liner, he balks, destroying his submarine, his crew, and himself. 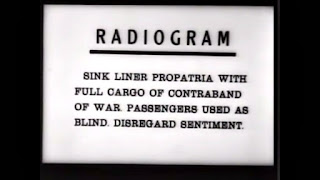 Then – stay with me – he goes to Purgatory and meets Christ, who commandeers his body for use in the world above. Restored to life, Count/Christ comes back to his native land and preaches peace. The King has him jailed, but a chorus of thousands of anguished women protesters compel him to visit the Count in prison. There, he finds the Count dead, but Christ  (through superimposition) rises out of the Count’s body and takes the King on a Christmas Carol-like cautionary tour of the battlefield, showing his first-hand (spectrally at least) the consequences of warmongering. The King, convinced, declares peace and the unmurdered portion of the soldiery returns home, to great rejoicing.

The production is stilted and undynamic, consistent with the undeveloped film aesthetic of the day. The big battle scenes, captured by multiple directors and cameramen, are unintentionally the most dynamic part of the film. The thankless job of playing Jesus was given to George Fisher, who portrays him woodenly –for how could you invest the Messiah with complexity, especially in an allegory?

The pretentious sanctimony of this early message picture became non grata immediately after Wilson did an abrupt about-face and declared war four months after it opened. The film was pulled, and was replaced by pro-war films just as subtle, like D.W. Griffiths’ Hearts of the World, The Beast of Berlin, and To Hell with the Kaiser! Powerful new techniques of mass persuasion, implemented by government workers drawn from the advertising industry, emphasized the savagery of the Germans and the righteousness of taking up arms, typified by recasting the conflict as “The War to End All Wars.” It was all too easy to turn public opinion from one pole to another.

The NFR Project is an attempt to review all the films listed in the National Film Registry, in chronological order. Next time: the 1916 20,000 Leagues Under the Sea.
Posted by BradWeis at 2:41 PM