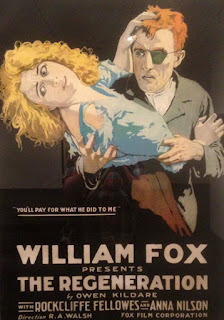 To be sure, there were hints of the gangster genre to come in short subjects such as D.W. Griffith’s The Musketeers of Pig Alley (1912) (see this link to my earlier essay, and others below), the real foundation and source of the crime film is the cinema of social concern, exemplified by earlier films such as The Cry of the Children (1912) and Traffic in Souls (1913). Spurred by the Progressive moment of the turn of last century, these films illustrated the plight of the poor, the immigrant, and others members of the disenfranchised.

In these Dickensian “sob stories,” the protagonists are victims in need of rescue. In Regeneration, the hero is an anti-hero – a bad guy with a good heart. In this case, his story is based on Owen Kildaire’s 1903 autobiography, My Mamie Rose, which chronicled the writer’s rise from illiterate, impoverished orphan to respected author.

The film starts much as any socially conscious film of the period did. Owen is orphaned at 10, and taken in by the couple across the hall of his tenement, not so much out of compassion as out of a desire for a free laborer. Exposed to constant drunkenness and violence, an early shot pushes in to Owen’s dismayed face as his adoptive parents clash over his head. For once, there is no magical solution to the child’s problems – he simply stews in the foul environment of the Bowery (and Walsh shot much of the film on its streets, hiring local ne’er-do-wells to fill the crowd scenes).

Rockcliffe Fellowes, who plays Owen as an adult, is known today only for his role as a straight man in the Marx Brothers’ Monkey Business, but boasted an extensive career in silent film. Owen leads a criminal gang. He is hard and dour, but also wistful. Unlike his compatriots, there is a glimmer of thought in his eyes. He collides with society girl Mamie (Anna Q. Nilsson, another now-forgotten silent star) at Grogan’s, a tawdry variety hall where the criminal class goes for entertainment. (Owen quaffs a beer, and this shot is intercut with a quick one of Owen-as-child in the same setting, gobbling an ice-cream cone – alcohol as the poor man’s comfort food.) She is “slumming” with her rich friends, escorted by the natty district attorney, who has eyes for her. When Owen rescues the D.A. from harassment in the hall, a spark ignites between the gangster and the debutante.

Soon Mamie is volunteering at the local settlement house. These were the settings for the efforts of a kind of urban Peace Corps of the day, a do-gooder movement that put social-welfare workers in the heart of the slums, living among the people they were trying to help. Gradually, she earns Owen’s trust and he begins to show signs of remorse and a longing for a better, more compassionate life.

The only male missionary in the picture is portrayed as weak and effeminate, but Owen exemplifies the virtues of muscular Christianity. He travels with her, and saves boatloads of children, when the excursion steamer they set out on catches fire – a reference to the General Slocum disaster of 1904, in which more than 1,000 died. He saves a baby from its drunken father. It’s as if Owen is rewinding his own history, and amending it for the good as he goes.

Inevitably, Owen has to choose whether or not to keep living in the gutter (his gang’s H.Q. is literally underground, a filthy cellar sprinkled with mattresses, filled with his men drinking, smoking, gambling, and plotting heists). He abandons his former life, and his one-eyed lieutenant Skinny takes over. When Owen shields him from the authorities after he stabs a cop, Mamie feels betrayed. She seeks him out in his lair, only to find herself trapped by Skinny, who has the usual designs on her.

In a dynamic closing sequence, Owen comes to the rescue. A brawl between cops and criminals fills the screen, and Skinny ends up shooting Mamie inadvertently. Owen’s quest for revenge is stymied by superimposed visions of Mamie reminding him that vengeance is mine sayeth the Lord.” Skinny’s life is forfeit, but his death doesn’t lie on Owen’s head. In a bold move, the film lets the heroine expire, but posits Owen as the torchbearer that will keep her mission alive.

What makes Walsh’s work special is the fact that he wastes none of the audience’s time. He has confidence in the ability of the viewer to follow the story, so he makes his point and moves on quickly, in scene after scene. Though his in-studio shots are uniformly lit in the manner of the day, whenever he gets on location Walsh tries and succeeds in making some incredible and evocative low-light shots that emphasize shadows – an objective correlative to the movement of Owen, a liminal figure, into and out of the light.

Regeneration doesn’t peddle any miracles. The characters’ behaviors spring from a naturalistic source, instead of being imposed from without for the sake of the plot. Owen is not a victim of fate, but a mature personality who makes choices good and bad, and who develops in a complex manner. This kind of respect for the dynamics of character and the unflinching look at contemporary slum life makes Regeneration still watchable. It feels real.

The NFR Project is an attempt to review all the films listed in the National Film Registry, in chronological order. Next time: the anti-war epic ‘Civilization,’ featuring Jesus.
Posted by BradWeis at 11:11 AM