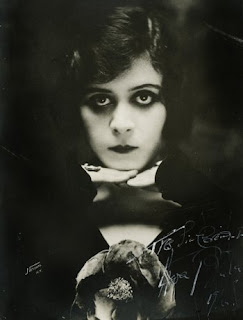 Theodosia Goodman moved to New York City in 1908 and started acting. Soon she was appearing in the primitive silent films being made on the East Coast in addition to her work on Broadway. In only her second film, A Fool There Was, she became a national star.

This was due in large part to the manufacture and marketing of a fake persona for her by Fox Studios. She was renamed Theda Bara, and given a long and ridiculously exotic biography – an off-screen script they expected her to keep to, for the sake of promotion. She did, and she took on the mantle of the dark-eyed, vaguely foreign seductress and ruiner of men, the “vampire.”

The femme fatale, the mysterious and seductive woman who destroys men’s lives, is an archetype as old as Lilith and Helen of Troy. In the Romantic era, poet John Keats’ “La Belle Dame Sans Merci” (“Beautiful, Pitiless Woman”) reintroduced the idea of the type. His poem ties back directly to Celtic tales of malevolent and covetous female fairies, such as in “Tam Lin.”

Meanwhile, the concept of the vampire was working its way into English culture. After john William Polidori published The Vampyre in 1819, other works such as Rymer and Prest’s serialized, 667,000-word, 1845-1847 epic Varney the Vampire made the word a household one.

Bram Stoker’s Dracula was published in 1897, as was Rudyard Kipling’s poem “The Vampire.” With Kipling, you must take the bad with the good. He’s a great storyteller and has a way with words, but he was an imperialist, colonialist, condescending, anti-Semite, misogynist racist, to say nothing of his penmanship. “The Vampire” stigmatizes the female sex as ungrateful, oblivious, and exploitive towards men, who seem to give all for them and get nothing in return. OK.

Oh, the years we waste and the tears we waste
And the work of our head and hand
Belong to the woman who did not know
(And now we know that she never could know)
And did not understand!

And so on. It may the first country song written by an Englishman.

Or course, in melodramas of the day, the temptress was as present as ever, a distaff counterpart to the male cad and bounder who trampled women’s hearts willy-nilly. The “vampire” type picked up the moniker from the poem, and soon “vamps” were seen as female, and sexual, vampires. Inspired by Kipling’s poem, playwright Porter Emerson Browne saw A Fool There Was hit Broadway in 1909. Soon the film industry, digging through the scripts of stage successes, got Browne to adapt his own play for the screen.

In the repressed society of the time, a woman who publicly acknowledged even the existence of sex was deemed a whore, or worse. A vamp was a homewrecker, a free and easy woman, a hussy who made safely married men lose their minds with lust -- who threatened the sanctity of the American home. Just as the early male sex symbols, vamps were “foreign,” with dark hair and Eurasian features. This “otherness” would be alternately condemned and fetishized by American film and culture down to the present day.

Theodosia Goodman was blonde, but Theda Bara had raven tresses. Her pleasant Mitteleuropean features were sharpened and darkened with makeup, her eyes rimmed by deep pools of kohl. She almost resembles the long-haired, white-faced, vengeful yurai of Japanese folklore and horror film.

She certainly doesn’t play a pleasant character. In this feature, which proudly calls itself “a psychological drama” (more marketing; Freud’s 1909 lectures on psychoanalysis at Clark University became a media sensation, and the psychoanalytic movement became an American craze), she’s imperious, selfish, and cruel. She is beautiful, pale, and willowy. She’s dressed fashionably, but she’s not noticeably sensual. The viewer must assume that she gratifies her prey in ways not fit to be screened.

Alone with her latest victim in her den of iniquity, her long black hair is undone and her nightdress in a state of dishabille, Bara is, literally, a “loose” woman. (Her manservant is Asian, connoting – what? His inscrutability a cliché that reinforces hers.) Having burned out her latest lover, who is now a shambling, drunken imbecile, Bara, never given a name but known only as “The Vampire,” sets her sights on family man, diplomat, and all-round good guy John Schuyler.

Bara is inadvertently snubbed by Schuyler’s wife, and snarls, “Someday you will regret that!” Later that evening, Schuyler and his family watch the sun set into the Atlantic Ocean (a neat trick as this film was shot in Florida.) as a slow iris contracts on their “the sunset of happiness.”

Fortunately for her, he must sail off to Europe on business and can’t take his wife and adorable fair-haired child. She books passage on the same ship. (On the sidewalk in front of the dock, she bumps into a beggar who is yet another of her victims. There seems to be battalions of them.) Her spurned lover pursues her on board, then shoots himself, which she takes quite well.

Off they sail. She drops her bouquet, which the gallant Schuyler retrieves, pausing to examine her artfully revealed . . . ankles. O sin!

The next thing you know, they are both lying asleep, draped across an upholstered fainting couch in the middle of a field, surrounded by potted plants and drinking liqueurs, which I guess is the typical aftermath of casual sex in 1915.

Schuyler’s friends shun him, and he undergoes a Rake’s Progress as we cut back periodically to see his family getting on without him. In fact, Bara largely fades out of the picture here as it focuses on Schuyler’s downfall. Bara is a catalyst, not a character. (It takes a while for his male friends to tell his wife the truth. She states, fairly enough, “You men shield each other’s shameful sins; but, were it a woman at fault, how quick you’d be to expose and condemn her!”

A Fool There Was is a cautionary tale for the moralists, with just enough sexiness to keep everyone else awake. It stays resolutely downbeat. After giving her husband chance after chance, his long-suffering spouse hauls in the ringer – she brings their golden-coiffed little daughter to beckon him home. They hug; they sob. But NOT EVEN SHE can overcome the evidently incredible power of Bara’s vagina. The vampire enters the room and summons Schuyler, who promptly and drooling, drops his kid and clutches Bara’s breast.

Spoiler alert: Schuyler dies, and Bara enters the room, and crumbles rose petals onto his dead face. That bitch.

Bara would make 44 films, all but six of which are lost. She got married and retired, never making a sound film. But her brief appearance cemented the archetype of the Jebel in American film. She embodies the transition between the decadent figures of Aubrey Beardsley to contemporary Goth girls. From Sadie Thompson to the Woman from the City in Sunrise: A Tale of Two Humans, to the gallery of film noir anti-heroines, to Alex in Fatal Attraction, it’s still with us. 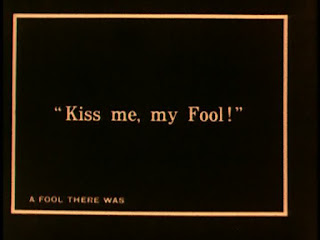 The NFR Project is an attempt to review all the films listed in the National Film Registry, in chronological order. Next time: the original vamp, Theda Bara, in ‘The Italian.’