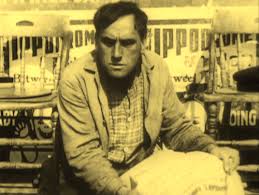 They were going to call it Dago. Its star convinced them otherwise.

In America, liberal tolerance can be almost as deadly as outright hatred. Reginald Barker’s 1915 feature drama The Italian is an early case of an early populist tragedy cast as a drama of social consciousness – proto-liberal chic, or the oh-my-what-a-shame movie.

At the time, a spate of moral crusading infected the body politic of the U.S.A. By 1915, the Progressive Era of social and political reform was booming, ushering in an idealistic (and racist) President Woodrow Wilson, and Prohibition was soon to come. Yellow journalism made headlines out of heartache. Many times, female journalists found themselves pressed into the role of “sob sisters,” sent to get the sentimental human angle to the gory tales of crime and corruption deemed fit only for men to cover. People ate it up.

This melodramatic approach to illustrating social issues is the ruling spirit of The Italian. Immigration was, if anything, a more contentious issue than it is today. The huge influx of Catholic and Jewish immigrants after 1890 threatened and worried the prior huge influx of primarily Protestant immigrants, who were now integrated into American society and running things. As the clamor for immigration restrictions increased, so did do-good efforts to “Americanize” incomers as fast as possible. First-generation Americans tended to retain most of their old-world ways; second-generationers vehemently turned away from their heritage. It would take third and fourth generations to come back to and make sense of their families’ immigrant experiences.

In hindsight, it seems obvious that immigrants were a huge part of early film-industry success. As a medium without a language barrier, it had to convey meaning directly, and everyone “got” a silent film (or didn’t if it was awful). Certain ethnic neighborhoods had translators who would announce the intertitles to the crowd – Western benshis. Many people learned their first English words in the darkened movie halls. To see their own experiences folded into the film tapestry of adventures, comedies, costume dramas, and the like must have been quite a revelation. 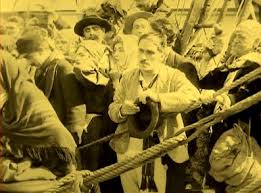 In seeing their own experience depicted, any critical viewer of the time would be smart enough to see where the seams between film and reality fail to hold. A story demands a plot, and the “realness” of the scenario is subordinate to the demands of a narrative that needs to be strong enough to pull the viewer through to the end. Although it’s shot with documentary-style feel, its pathos comes from a much older dramatic tradition.

Its star George Beban was known for his ethnic impersonations on stage, and he opens the film as himself, smoking a pipe in his study as he picks up the “book” of the film and opens it. The camera PULLS IN as he reads ever so slightly. It’s the first time I’ve seen that camera movement in this series to date, and it creates a magnetic effect. He begins to read, and we hopscotch to a static shot of the first page, “Chapter 1: In Old Italy” . . .

It’s Venice (CA, substituting for IT). Beban plays – wait for it – BEPPO, a happy-go-lucky, betassled, singing gondolier! And he is ever-so-happy to take the tourists for a little row now and then. He is picturesque in a way that today would rightfully bring scorn from anti-stereotype groups, but that was in much accord with popular visions of Italian-Americans at the time. He is emotional, simple, happy, impulsive -- much the same attributes ascribed to every other incoming ethnic group in the history of American immigration -- just as other incoming groups are stigmatized today. His stereotype is humanized through sentiment – that Beppo! Such a kidder! He lives! He loves! Is he not unlike you and I? (Beppo’s childish vulnerability makes him seem a few spoonfuls shy of a bowl of minestrone at times.)

Beban doesn’t become Beppo, he impersonates him – a big step away from the innovations of later actors such as Chaney and Muni, who made careers out of vanishing into roles, a kind of inverse Method acting that built roles from the outside in. The fact that Beban is shown reading in the prologue, comfortable in his robe among his books, things which Beppo does NOT possess, lets us know there is clear separation in the minds of the filmmakers – prominent Anglos can only “play” ethnics, and must not be confused with them.

Beppo loves little Annette, but her poppa says no she will marry the mean old rich man unless Beppo makes good – a comic-opera first act if there ever was one. Beppo is a go-getter, and he promptly sails for America to make his fortune and send for his beloved. Straying not far from the boat, he becomes a bootblack on a street corner of the Lower East Side. Beppo takes a bribe for his vote from the local “slums boss” Big Bill Corrigan, and this and the shoe shining give him enough to bring over Annette and marry her. Soon they are three with the addition of baby Tony and a typical comic birth-announcement scene.

The filmmakers soon get cracking, however. There is a heat wave in the city and little Tony is sick. The doctor visits and says, “The heat and impure food are wearing him out. You must buy him only Pasteurized milk.” Beppo goes into action with the few coins he has, but he is set upon by two thieves who beat him unconscious and take his money. He later finds them in a bar, drinking up his money. Here we cut to a very effective, staggeringly close-up shot of his face, tears and anger bemixed as he beholds them. It demands that the audience identify with the protagonist. 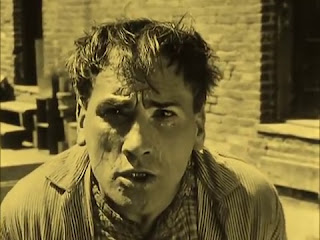 “I must get-a-de-milk or my babe is die,” he says in pidgin intertitle. He fights the duo, but is stopped himself by an oblivious policeman. Beppo sees Big Bill Corrigan nearby, begs him for assistance, but the boss brushes him off in a remarkable running shot of Beppo clinging to the running board of the boss’s car.

Beppo is arrested; while he is in jail, his baby dies. Beppo finds out through the newspapers that Corrigan’s child is ill and near death; he decides to revenge himself. Disguised as a peddler, he breaks into their mansion and makes it all the way to the bedside of the fitfully sleeping child. He is ready to smash its head in when remorse and mercy break through and compel him to leave.

He creeps away, and in the last shot attends the grave of his son and collapses upon it, weeping. This kind of clemency is very much in accord with Christian principles. There is something Verdian in the ending, too – a magnificent refusal to take revenge similar to that described in Trovatore.

There is something about the submission to will of God here, too, an acceptance that can be a healing force for the powerless. To many reformers, though, this kind of acceptance was a negative capacity for passivity, a submission to normative forces that left much to be desired. Already the new immigrants were learning that the power to change things, to surmount stereotype, was in their hands in America more firmly than anywhere else they’d been.

And, going even further, on a lower, darker level, the film is literally a photographic negative of The American Dream. The hero goes from relative peace and affluence, a place in a fixed society, and ends up not on a street paved with gold but rootless, impoverished, and despairing in a graveyard.

[On a purely subjective note, allow me to urge the viewer to seek out the print with the score by Rodney Sauer, performed by the Mont Alto Motion Picture Orchestra, of which he is a member. I am fortunate to live in an area rich with silent-film musicians such as Rodney and Hank Troy, the latter of whom started me on all this with a magnificent series of live accompaniments decades ago to films curated in conjunction with Walter Kerr's brilliant and far-reaching book The Silent Clowns, all crammed into two weeks or so of constant attendance at Denver's Ogden Theater. Continue to support their worthy efforts, including Howie Movshovitz's wonderful Denver Silent Film Festival and Boulder. Colorado's Chautauqua summer silent-film series. And buy every film DVD you can. Say it with money. C'mon.]

The NFR Project is an attempt to review all the films listed in the National Film Registry, in chronological order. Next time: Raoul Walsh's seminal gangster drama ‘Regeneration.’