Roscoe Arbuckle weighed 13 pounds at birth, destroying his mother’s health and contributing to her premature death 12 years later. His father suspected that he was the son of another man. Lesser things have driven people into a need for the plaudits of show business.

He had a divine singing voice, but his comic talents brought him to the fore. Like many large comic performers (Oliver Hardy, Jackie Gleason), he was light on his feet and capable of unexpected acrobatics. He became a wow in the field of vaudeville on the West Coast, and jumped into moving pictures at just the right time.

D.W. Griffith shot the first feature-film footage in Los Angeles in 1910. The forgiving climate, the laid-back atmosphere, and the distance from the litigious Thomas Edison, who didn’t want anyone infringing on his film patents, made it a natural destination for budding and/or independent film production companies. Twenty-five percent of the industry moved West immediately.

Mack Sennett was part of that movement. At 32 years of age, he built Keystone Studio and began literally cranking out slapstick comedies. By the following year, he had three hot properties: comedienne Mabel Normand, the Keystone Cops, and Fatty Arbuckle. For the next eight years, Arbuckle was in the leading rank of movie clowns. He mentored Charlie Chaplin; he discovered Buster Keaton and Bob Hope. 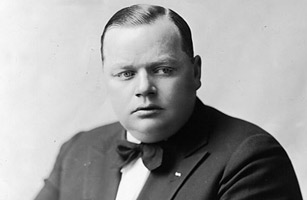 “Fatty’s Tintype Tangle” is typical of Arbuckle’s work. Here he plays a henpecked husband who literally waits like Cinderella on his wife and nagging stepmother. The idea of a fat man being effeminate is reinforced by his somewhat inept execution of kitchen duties (though he is graceful with a spatula and a pancake), and the sarcastic curtsey he executes when summoned. He is a “gentle man,” meaning gentled, pacified. He is more of a grown-up adolescent, what used to be referred to as a scamp. It’s an appealing comic persona, an epicene Everyman.

Forced to give his mother-in-law a good-morning peck on the cheek, he crams spoonsful of sugar into his mouth. After taking a few hits off the jug in the kitchen, he becomes rebellious and aggressive, which backfires on him. On one disturbing level he’s a baby-man; a toddler who messes his clothes, hands, and face with food, drink, and other substances. Fatty makes a mess, breaking dishes in a tantrum and eventually eating a plate, eventually and clumsily asserting his manhood and leaving.

The plot is convoluted and farcical. Fatty accidentally has a compromising photo taken of himself and a strange woman in the park. (The photo is the tintype of the title – a positive print made on an emulsion-coated, thin sheet of metal, which could be developed in minutes, making it the “instant” photography of its day. It was used primarily by itinerant photographers at carnivals and fairs, and was already an anachronism at the time this film was made.)

The woman’s husband threatens him, and Fatty tries to leave town. The woman and her husband, portrayed as uncouth rues from Alaska (?), are looking for lodgings, and Fatty’s wife rents out their rooms to them. Fatty returns home, all parties, converge, and complications ensue.

Many of the standard gags are here – Fatty slips on a banana peel, a first for this survey. A man is knocked onto a moving streetcar via reverse on-screen motion. There is comic jousting and gunplay. The Keystone Cops are cut into the film, but they never actually interact with nay of the principals, so it’s likely unrelated footage of them that was thrown in out of context, as a crowd-pleaser. The highlight is some wire work – in evading the jealous husband, Fatty does some acrobatics on elastic bands made to look like telephone wires two stories above the ground in what looks like unfaked footage. After a double fall into a rain barrel as an excuse to do some underwater gagging, the two men are hauled out by their respective wives and the film comes to a harmonious if abrupt end.

The jealous husband is played by none other than the up-and-coming comic actor Edgar Kennedy. A former boxer (he went 14 rounds with Dempsey), he joined Keystone as one of the original Cops, growing into a supporting player known as “The King of the Slow Burn.” Here Kennedy is functional, displaying a flash of his superior mugging when he thinks for a moment he’s killed Fatty.

Kennedy was the paramount purveyor of frustration. In more than 500 films, he played grumpy cops, judges, tradesmen, homeowners, and my favorite, “An Innocent Bystander.” His long slow takes to the camera, usually accompanied by a pulling down of hand across the face or a perplexed drumming of fingers on his own noggin, are best remembered from later Laurel and Hardy outings, and the hapless lemonade vendor in the Marx Brothers’ “Duck Soup.”

Interesting and overlooked, he made more than 100 “Average Man” short subjects over a 17-year period for RKO. Kennedy was the centerpiece of an ongoing domestic comedy that foreshadowed the situation comedy of radio’s “Life of Reilly” and TV’s “The Honeymooners.”

In 1921, a death at a party hosted by Arbuckle led to rape and murder charges against him. After three highly publicized trials, he was acquitted – but it was too late. His career was ruined, and many of his films were destroyed by the studios, who couldn’t see why anyone would want to ever see them again. He made 154 films before the scandal; he made 11 after. He died in 1933, at the age of 46. Great contemporary comic actors such as John Candy, John Belushi, and Chris Farley all expressed interest in playing Arbuckle in a film biography; all three died tragically young before it could happen.

The NFR Project is an attempt to review all the films listed in the National Film Registry, in chronological order. Next time: the original vamp, Theda Bara, in ‘A Fool There Was.’