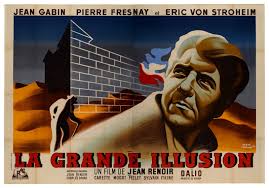 Happy Bastille Day! I love French film, and have ever since I saw Cocteau's "Beauty and the Beast" when I was 10 years old. Without the time to write summaries or analyses of each film (this can be rectified by purchasing this story from me), here's my quick list of essential French films.

Now, lists tend to tell us more about the list-maker than anything else, so any omissions or questionable inclusions are a reflection of my own idiosyncrasies. Also, I have questions about who is a "French" director. Maurice and Jacques Tourneur, whom I both love, made the bulk of their films in America. Is Max Ophuls a French director? I think not, but I deem his son as one. What about expatriate Joseph Losey? American, English, or French?

And where are Resnais, Rohmer, Tati, Demy, etc.? Well, dammit, I don't LIKE them, so  they're not on the list. And -- do you hate Luc Besson? I don't. I love Jean-Pierre Jeunet, and hate "Amelie." And so it goes.

As well, each significant director is represented with one film, as an entry point to that person's work. I can and have watched all of Renoir, Truffaut, Vigo, Cocteau, Melville, and Varda, multiple times, and am working on the others. Good stuff here! If you can't find the specific film listed, there are plenty of other choices in each director's list of films.

Plus, these will teach you life skills. I watched enough French gangster films to be conversant in French when I went to Paris -- although I was best able to say things like: "look out for the cops" and "roll me another cigarette."

Email ThisBlogThis!Share to TwitterShare to FacebookShare to Pinterest
Labels: Lists