From the files: ‘Do let’s be brave’ – Lean directs Coward

I was fortunate to write up the Criterion Collection's excellent four-film set of David Lean's direction of Noel Coward's work in his first outings as a director for Film International in 2013. It has only seen print to date --

“I loved its follies and apathies and curious streaks of genius,” wrote Noel Coward of his decision to return to England when World War II began. Had he not, the rise of David Lean would not have been deterred, but it may not have been as swift or as assured.

Coward provided Lean with writing that was strong and well-structured; Lean, as an already accomplished editor, knew how film worked. He could eliminate the extraneous. He had a keen sense of how to breathe cinematic life into a flat concept or character. Lean serves the material; later he will serve himself, with ever-more preposterous results.

Their mutually beneficial relationship is captured definitively in Criterion’s new box set. The first film in the series, the breathtaking World War II propaganda film “In Which We Serve,” was written for the screen; the next three – “This Happy Breed,” “Blithe Spirit,” and “Brief Encounter,” are stage-derived. Lean solves the problems put to him in two out of three cases by the plastic limitations of the material, at best with “Encounter,” but to middling effect in “Breed” -- and comes up empty in “Spirit.”

When the war began, Coward was in a unique and ambivalent position. A tremendously popular entertainer, he was a prolific songwriter and playwright with a reputation as an effete, cutting drawing-room wit whose undeclared but obvious homosexuality both amused and repelled England’s middle class. Coward had written his grand stage chronicles of English life, “Cavalcade” and “This Happy Breed”; his patriotism was showing. He volunteered for the war effort in numerous ways, and “In Which We Serve” was the grandest of these, earning Coward an honorary Oscar and an air of unassailable legitimacy. 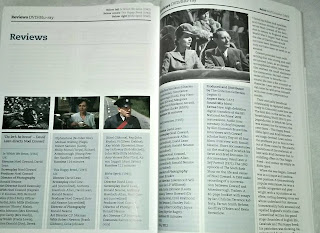 Based on the exploits of Coward’s friend Lord Mountbatten early in the war, the naval saga “In Which We Serve” is a perfectly pitched paean to the fighting spirit. In this case, it is delineated not by violence and victories, but by patience and fortitude in the face of what were at the time seemingly impossible odds. In this film, Britain’s classes are exemplified, and barriers between them are tacitly overcome as all bond together in unity, modesty, understated humor, and stiff-upper-lip stoicism.

Coward, in particular, was making a huge gamble. His insistence on making it “his” project included casting himself as the brave Captain Kinross, master of the destroyer Torrin. Coward’s portrayal of a noble, unaffected, and incredibly straight naval officer was probably his greatest performance. Coward’s Kinross is absolutely calm, repressed to the point of being wooden; an apt critique of the heterosexual male stereotype in performance. (Later, Coward would overhear criticism of his performance from a neighboring table at a restaurant. As he left, he flounced over the offenders, put his hands on his hips, and hissed, “Well, I thought I was VERY GOOD!”)

Neame’s inky shadows and sharp highlights lend depth and dimension to the combat scenes, a nourish contrast to the traditionally lit domestic and flashback scenes. This high-contrast look will maintain itself in all succeeding black-and-white Lean films.

Lean, known already as the best film editor in England, now showed his organizational and leadership capabilities. Although he was a notoriously bad hand at drawing, he resolutely storyboarded the action -- and annotated his shooting script to within an inch of its life before hitting the soundstage. “All the important imaginative thinking, he (Lean) maintained, had to be done before the shooting commenced; there was no time for lengthy improvisations on the set when a director was working with numerous actors and technicians.” (1) This thoroughness and discipline served him well in future; his stone-faced seriousness on set would later lead to rifts with more easygoing colleagues such as Trevor Howard and Robert Mitchum.

Lean began production on “In Which We Serve” as a glorified assistant director; however, Coward wearied of the time-consuming, technical rigors of film direction and turned over the helm entirely to Lean after a few weeks. Even in his first effort, some of Lean’s trademarks -- confident pacing, deep-focus shots, and close attention to the human face -- are evident. “. . . .the fact that Lean was able to stamp his personal style upon a production overshadowed by Coward’s looming (and egotistical) presence says much for his ability.” (2)

Overcoming a initial lack of support and cooperation from the British military with an intervention from King George VI himself, Coward and Lean’s film wound up on release to be quite literally a rousing success, serving as a template for the stiff-upper-lip heroics of war films to come. The fruitful association continued.

“This Happy Breed” was a sentimental, historical stage epic in the style of Coward’s previous “Cavalcade” of 1931 (that show initiated the cliché in which a loving shipboard couple wanders away from in front of a life preserver . . . labeled “H.M.S. Titanic”!). Where “Cavalcade” profiled the upper crust, “Breed” looks warmly, if condescendingly, at the working class.

It’s another tribute to the spirit of embattled England, studded with heartaches and happiness, rendered in a deliberately dull Technicolor palette to more accurately reflect the dingy reality of plebian life. It’s an uneven if deeply felt panorama that fails to engage.

“ . . .he took every mundane event the cinema avoided – washing up, drying clothes, a great many meals – and worked the dialogue into them. For a British film to do this was unusual enough, but to show the kitchen sink, albeit in muted Technicolor, was revolutionary.” (3) This, along with a not-so-obscure moralizing about the comeuppance of those who don’t know how to “keep their place” oddly presages the conventions of British “kitchen-sink” social realism that were to flower 12 years later with John Osbourne’s “Look Back in Anger.”

“Blithe Spirit,” a farce about ghosts and fidelity, initially hailed as a masterful work, has not stood the test of time. Its brittle drawing-room sauciness is a return to form for Coward, and it had a long and happy run on stage in London. However, in Lean’s hands, the jokes fall flat – male lead Rex Harrison waspishly declared years later that it’s useful to make a comedy with a director who knows what’s funny. It is known best watched for its Oscar-winning special effects and Margaret Rutherford’s definitive performance as the batty medium Madame Arcati.

Lean and Coward’s final collaboration, “Brief Encounter,” equals “In Which We Serve” in quality and significance. A third adaptation of a Coward stage work, it tells the story of two married people who meet by chance in a railway station, fall in love, realize that an affair would destroy them both, and part.

It’s a fever-dream, stream-of-consciousness visual poem punctuated with the heavy thuds of “realities” to be faced up to bravely. Our narrator and protagonist, Laura (Celia Johnson is absolutely perfect as the clipped, overwrought, unconventionally ravishing heroine) feels so keenly the lost chance that Alec (Trevor Howard as a noble young doctor) represents that she contemplates throwing herself under a train a la Karenina in the penultimate scene.

As is the case in almost every subsequent Lean film, the willing spirit is chained by the weak flesh, the social imperative. Wild, nonconformist impulses threaten the blasé normality from which they sprung and are snuffed out ruthlessly. Tellingly, Lean is quoted as saying: “I am drawn to the person who refuses to face defeat even when they realize that their most cherished expectations may go unfulfilled.” (4)

Like Rosy Ryan in “Ryan’s Daughter,” Zhivago, Lawrence, and Nicholson in “The Bridge on the River Kwai,” Laura is swept out of and above mundane reality by her passionate obsession, but is flung to earth. In the end she does the right thing – and crushes out her soul like a cigarette butt.

Coward and Lean both moved on to reach iconic heights – Coward as a sort of aging roué, and Lean as the eminence grise of cinema, for better and worse. To watch these four films in chronological order is to see Lean grow from a contractor to a fully assured artist who is ready to do what he needs to make his vision come to life.


Extras New high-definition digital transfers of the BFI National Archives’ 2008 restorations. Audio commentary on Brief Encounter by film historian Bruce Eder. Interviews with Coward scholar Barry Day on all four films. Interview with Ronald Neame, short documentaries on the making of In Which We Serve and Brief Encounter, TV documentary David Lean: A Self Portrait (1971), 1992 episode of The Southbank Show on the life and career of Coward, 1969 audio recording of conversation between Coward and Attenborough, trailers, 46-page booklet with essays by Ian Christie, Terrence Rafferty, Farran Smith Nehme, Geoffrey O’Brien, and Kevin Brownlow.
Posted by BradWeis at 12:00 PM