Ask around. Compelling, complex roles for actresses beyond what society deems “breeding prime” are few. Even within that ripeness range, women are still largely props – saintly victims, evil temptresses.

Nowhere more so than in film noir, where these stereotypes are essential to the efficient functioning of the genre’s typical plotline. A classic film noir is usually thought of as being the story of a hapless man drawn cynically to his doom in an amoral, uncaring, brutal world by a femme fatale. However, a recent pair of screenings of initial noir outings by later masters of the genre provides an interesting contrast to this conception. These two films feature, surprisingly, active female protagonists with their wits about them.

I had a chance to see Robert Siodmak’s 1944 “Phantom Lady” and Joseph H. Lewis’ “My Name is Julia Ross” from 1945 recently on the big screen. (A curatorial pal, the International Film Series' Pablo Kjolseth, who has a dandy backyard cinema, showed these over the course of a couple of summer weekends. They leaped to life, beautiful prints gleaming through the lens of a venerable 16-millimeter projector, the air faintly redolent of machine oil and heated celluloid. Mmmmmm.)

Robert Siodmak, as versatile in his workmanlike way as Michael Curtiz or Victor Fleming (he would helm strong entries in the swashbuckler, Western, horror, and other types). He would feature strong women in later noirs such as “Christmas Holiday” -- the debut of Deanna Durbin as a “serious” actress, featuring Gene Kelly as an insane killer, complete with soundtrack from “Tristan and Isolde”! – and “The Spiral Staircase.” Lewis, too, would give us compelling if not as heroic women in “Gun Crazy” and “The Big Combo.”

Both films come from the first of three classic-era noir periods as defined by Paul Schrader, which lasted only from 1941 to 1945. Schrader characterizes this period as that of the “private eye or lone wolf,” and its films feature A-list budgets and casts, favor static shots over action sequences, display a disdain for location shooting, and maintain a strong grounding in the smooth, elegant studio look that would soon be displaced by the gritty-realism trend of the genre of the 1950s.

What unites these two films in my mind is the way they give their protagonists the floor – as competent, nuanced characters that come up with novel ways to overcome the obstacles they face. 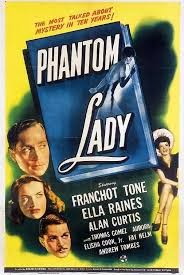 Part of the film’s balance may come from the fact that it was the first producer credit for Joan Harrison, whose work as a screenwriter included classics such as “Rebecca,” “Suspicion,” “Saboteur,” and “Foreign Correspondent.” Harrison would become one of only three female producers in Hollywood at the time, and would later helm the TV series “Alfred Hitchcock Presents.” Another contributing factor may have been the source material, penned by Cornell Woolrich as William Irish. Woolrich, one of the best and most adapted crime writers of the 20th century, whose novels and stories are crammed with central female characters who are threatened, disappointed, out for justice.

The protagonist is played by Ella Raines, a generic starlet of the day. She plays “Kansas,” the faithful secretary of the young, dumb, handsome and unhappily married civil engineer Scott Henderson (Alan Curtis). When Scott’s wife is killed, he has no alibi – save for a mysterious lady he gave a spare theater ticket to and sat with at a Broadway show. The “phantom lady” distinguished by her uniquely designed hat, sporting a full-sized bird, identical to one worn by the star of the show (Aurora Miranda, sister of Carmen).

Beyond the Freudian suggestiveness of a woman’s hat as an object that defines feminine identity, a search for one takes us into uniquely feminine territory – couture being a land few men dally in. A lady’s hat, like Desdemona’s handkerchief, has been used as a device in stage farces and tragedies for centuries, usually designating a woman’s virtue or reputation as moveable and external to her essential nature. In “Phantom Lady” a hat becomes the key to identifying a murderer.

Kansas, of course, is secretly in love with Henderson – which, in movie-logic terms of the day, means that he must be innocent and that they are meant to be together. She trails the few witnesses to his alibi, all of whom have lied to the police to incriminate him. She stalks a close-mouthed bartender with a death’s-head countenance – in a memorably staged scene on a train platform, he nearly pushes her into the path of the cars, only to be run down in the street later himself, on the run from her relentless questions.
Kansas, abetted marginally by a male authority figure, Burgess (Thomas Gomez, usually a villain, as the supportive police inspector), even dresses up as a jazz-loving, gum-chewing floozy to attract the attention of pit drummer/witness Cliff (Elisha Cook Jr.). Cliff takes her to a shadowy basement jam session, littered with beer bottles and Dutch angles, and populated improbably by solid jazzmen Jimmy Slack, Barney Bigard, Howard Rumsey, Roger Hanson, and Dole Nicolls. 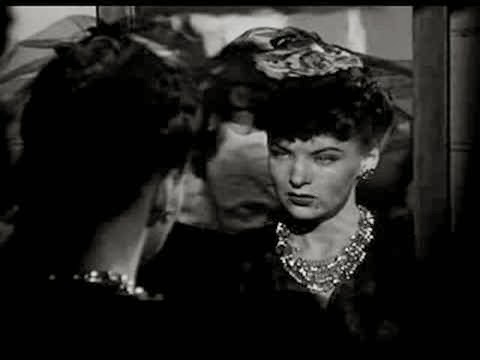 Meanwhile, Cliff looks her up and down lustfully, while banging out a wild drum solo. Kansas is seen now from below, stretching out her arms and goading him on like some demon, even laughing with head thrown back like the clichéd vamp. Cliff’s face becomes a rictus of unfulfilled orgasmic expectation. This is a man who is certain he’s going to get laid. (No wonder this scene got censored in Pennsylvania (1).) 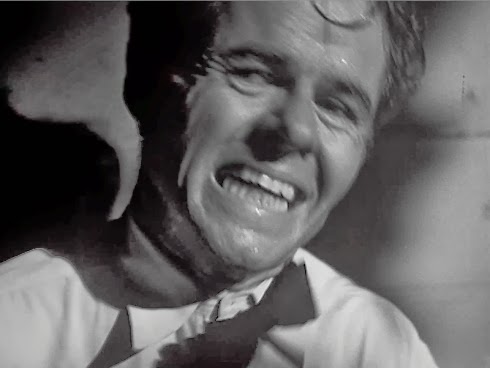 As with the first perjured witness, Cliff is marked for death as well (the killer? I’m not going to tell you who he is, but his initials are Franchot Tone, playing the standard I’m-a-sensitive-artist-so-I-strangle-people-who-piss-me-off-as-I-rub-my-eye-furtively-as-though-I-might-have-a-brain-tumor role). Kansas finally tracks the hat’s owner through the milliner, whose employee, an oppressed-looking immigrant woman who knocks off copies under the table. The Phantom Lady is found – she turns out to be a dead end -- in a doctor’s care, distraught and deranged over the death of her intended husband (of course! Wouldn’t that drive any woman mad?). Hung up on a man she can’t have, she serves as a kind of passive doppelganger for Kansas.

Eventually, the plot succumbs to Movie Logic and Kansas is rescued by Burgess just after the murderer’s confession, but before he can dispatch the heroine. The final blow comes when the freed Henderson proposes to Kansas via Dictaphone. Whatever autonomy Kansas has earned is about to be snuffed out again. 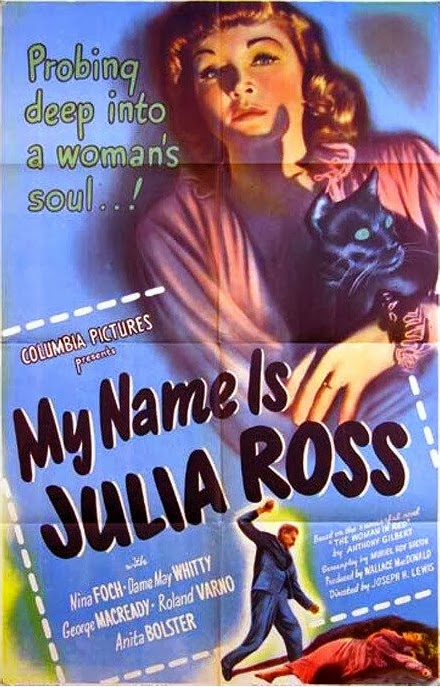 Good old George Macready. He’s such a stinker.
The cultured, well-spoken actor, marked by a distinctive scar on his right cheek, had a long career as a screen villain, and is remembered particularly for his roles as baddies in “Gilda” and “Paths of Glory.” He’s the perfect choice to play the psychotic, murderous man-child Ralph Hughes in “Julia Ross” – the incarnation of Husband as Monster. He is that rarity in film noir – rather than a femme fatale, he is a “homme fatale.”

The writers of both the source novel and screenplay were women – the book “Lady in Red” was penned by Lucy Beatrice Malleson, writing as Anthony Gilbert (wheels within wheels!) and the script came from Muriel Roy Bolton. Like “Gaslight” and other thrillers that always seem to take place in old Victorian mansions, memory, identity, and threatened male dominance are key themes.

Julia Ross (Nina Foch) is a young woman, just getting over a breakup and needed surgery. She applies for a secretarial position at an agency that insists that she have “no family entanglements, no romantic interests.” “I’m absolutely alone,” she responds. She’s a blank slate.

She also happens to resemble the late unlamented wife of Ralph, who, it seems, gets a little bloodthirsty when he’s on edge. His overprotective mother, played by May Whitty, chides, “Try to remember -- if it wasn’t for your temper, you wouldn’t be in this awful trouble today.” Ralph responds later, “It’s all Marion’s fault – she shouldn’t have cried.” Ralph has a tendency to shred things, like spouses, with knives – his mother has a drawer full of weapons she has confiscated from him. To get Marion’s money, Ralph and his mum need a body that doesn’t look like it was stabbed over and over and over. And over. Welcome Julia!

Julia is taken to the Hughes’, and promptly drugged. Everything she owns is incinerated. When she wakes, everyone calls her Marion, tells her she is married to Ralph, and informs her that she is recovering from a nervous breakdown. Everything she owns has an “MH” monogram. The Hughes’ ornate seaside mansion, which nominally might seem to be a dream come true for a single woman of the period, a scene of domestic bliss and security, is a prison and a death trap.

Lewis’ use of objects and light patterns to convey meaning is exemplary. Secret passages abound in the house; the shadow of a hand stretches across her covers, Nosferatu-like; Julia screams and flings a brush across the room, breaking a mirror – more Freudianism, still in vogue across the cinema of the day (think “Spellbound”). Bars, physical or shadow, constantly obscure Julia’s face.
The standout scene in “Julia Ross” in one in which, gutsily, Lewis shoots over Ralph’s shoulder as he engages in a bit of a psychotic ramble. Only Julia’s eyes can be seen, reacting warily. Ralph’s image is literally blotting her out. Julia fights back repeatedly when Ralph tries to kiss her, slapping him once and triggering his attempt to throw her out a window. Julia would rather be dead than subsumed. 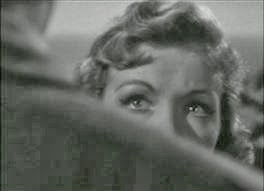 Julia hangs on to her identity, against all odds, and works actively to free herself, escaping once in a visiting car and getting letters in the post. The usual authority figures – minister, doctor, policeman – all come to the Hughes’ door, only to be fooled by the family’s pretense. Only when Julia fakes her suicide, forcing Ralph and his mother’s hands, do Julia’s friend Dennis and some officers appear in the nick of time – shooting Ralph to death as he flees down the beach.

The reassuring male paradigm is reasserted. Julia’s friend and savior Dennis proposes a new job for her. “A combination secretary, companion, nurse, housekeep-“ “That sounds like a wife,” Julia responds. She accepts immediately, and they embrace. Alarmingly, they are driving at the time – but thanks to Movie Logic, their car doesn’t crash. Fadeout. “Ironically, she will soon assume a new name and a new identity, although one presumably not at the hands of a violent psychopath.” (2) In both “Phantom Lady” and “My Name is Julia Ross,” the possibility of female autonomy is tantalizingly dangled, only to be snatched away at the very end.

These two films are emblematic of a transition point in American film – a move away from complex, independent female characters as embodied in “women’s films”/”weepies” of the ‘30s and ‘40s (“Dark Victory,” “Imitation of Life,” “Now, Voyager,” and other vehicles for Davis, Crawford, Stanwyck, Harlow, et al) and the post-war reassertion of male privilege onscreen. As soldiers came home and reintegrated into society, women film characters shifted into rigidly defined categories. They became either wholesome and home-abiding, or they dangerous free agents, up to no good.

Film noir can be a fertile ground for heroines. Here we have women as protagonists, righters of wrongs, refusing to be victims – agents of positive change rather than ministers of destruction or helpless victims or good girls that stand by and watch. It was fun while it lasted. 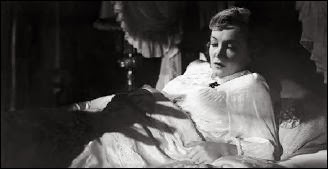 Who the Devil Made It
Peter Bogdanovich
Alfred A. Knopf
New York
1997