Our movie diet: it gets weird 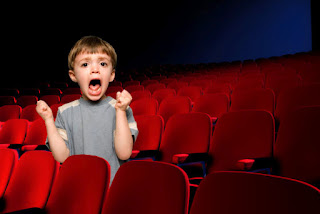 We are a seriously movie-mad family. I myself am a matchless source of useless movie trivia; my wife can predict the end of any film after watching it for 10 minutes. These radioactive superpowers have been passed on to our cinephile children.

We will watch just about anything, on the principle being that you can learn more from a flawed film than a good one. For instance, a few weeks ago we went to the last existing drive-in theater in region and caught the matchless TRIPLE-feature of “The Avengers,” “Dark Shadows,” and “The Hunger Games.” This bubblegum extravaganza was thoroughly enjoyed by all. 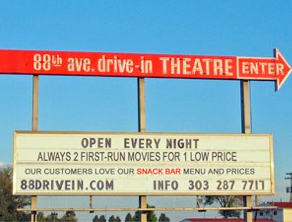 Can we o.d., though, on too broad a palette of cinema? Here’s what we churned through two weekends ago: 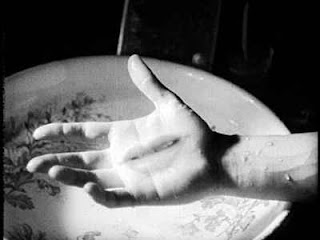 I have my snob credentials updated regularly by periodically refreshing my memories of bizarre avant-garde work such as Cocteau’s Orphic trilogy, “L’Age d’Or,” etc. The kids loved Cocteau’s “Beauty and the Beast,” but were as stymied as I confess I still am by its meandering beauty.

Here, all of Cocteau’s visual tricks and subversive gestures are isolated from narrative, and they overlap and overcome each other in successive waves. Why does the artist have a mouth stuck on his hand? Why is there a cow with a map on it? Why do the figures slide on, float from, and snatch at the interiors? Just what the hell is going on here? About halfway through, I paused it and we moved on. 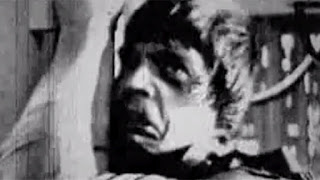 A friend of ours has a screen set up in his back yard, and holds a impromptu film festival out there every summer. His taste in films is impeccable, so when he announced a family-friendly feature, we dragged the little ones along.

I don’t know how this phenomenon got started. The idea of knocking George Lucas’ first trilogy of films into a two-hour version, scaling the screen back to the classic 1.35:1 ratio, decolorizing it, and adding intertitles has been used by a recent spate of amateur, online editors. (This was not the best-known Anachronisme version, which contains a tinny, period piano score, but a cut scored with the original film music.)

The concept is interesting; that it would work is not so surprising. Movies being a visual medium, any filmmaker would hope that his or her work could be reduced to its most basic components and still make sense and move forward. This project did, to the extent that a torrential rainstorm only prompted a refreshment break and not an abandonment of the screening.

The Boulder Museum of Contemporary Art is located near 13th and Canyon Streets in downtown . As we were visiting the weekly Farmers’ Market, we dashed into the museum to peek about. (Admission to the museum is free on Saturdays and Wednesdays from 4 to 8 p.m., a great promotional idea.)

We were lucky to see the show “Visual Rhythm,” which runs through September 9. It features the work of several film, video and techno artists, most prominently Stan Brakhage.

Brakhage, who taught at the and spent many years in the region, has always been a darling of the avant-garde . . . and someone whose work I couldn’t stand. However, his “Persian 1-5” finally reconciled me to his approach.

The film, projected large on the gallery wall, consists of 15 minutes of film in a loop. The film is hand-painted, and moves in hypnotic linear patterns that range from delicate, light washes of bright colors to heavy swathes of near-black. There is no soundtrack; the whirr and clack of the old-fashioned 16-millimeter projector that shows the film provides a small-scale industrial white-noise background that enhances the trance-like writhings on the gallery wall.

When I gave it a chance, it drew me in. Brakhage controls the rhythms of the revealed visuals in a very musical way, exciting unexpected responses and feelings, at least in myself. Its seemingly endless variety makes it a moving mandala, an action painting in action.

The film itself is on display, in a Rube Goldberg-style contraption. The film feeds from the vintage ELMO 16-CL projector back into an eight-foot-high white box with a cear Lucite backing. The film rests and rotates through 33 five-foot vertical loops, the starting and ending point of which is a single yellow square of splice that moves from top to bottom and left to right, over and again.

This demystifying setup not only makes the material more approachable, but provides its own kind of visual fascination. The passages that play out so fleetingly in the projector’s light are displayed, unilluminated, waiting for the transformative moment to bring them to life, only to cycle back into readiness and potentiality.

Among the other interesting pieces in the show are “Le Region Decentralized,” a so-called “never-ending, self-playing video game” by Rick Silia; Kathy Dove’s “Gondla,” a pastel, pastoral collage; David Fodel and Paco Proano’s “Channel,” Sara Ludy’s “Body Wave,” a brooding landscape of shifting charcoal shapes married to ambient music; and Fernando Velasquez’ “Mindscape” series – a visual kaleidoscope/drumset with which the viewer can play. 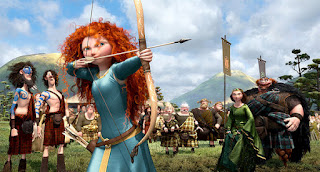 Of course we had to go see “Brave”; our daughter is eight! Disney, although the curse of my early movie-going life (want to cry hysterically? Go see “Bambi”; want to pee your pants with fright? Check out the witch in “Snow White”) the company’s projects are much better these days at avoiding triggering trauma, and empowering girls as well.

Thrilling? No. Innovative? No. The kitsch of the opening short, “La Luna,” softens us up for an animated time-passer that seems to wander between themes until it reaches the ultimate dust-up, last-minute redemption and happy ending. Your mom's a bear.

We got home that night and I unspooled the end of “Blood of a Poet.” After four days of a smorgasbord of movies, it made no more sense than it had when I paused it. Yet it seemed to sit a little more comfortably in my visual cortex, piled on top of the other thousands of films that reside there.

Perhaps these layers will grow so deep and weighty that they will compress, and extrude some kind of pure insight that I can tap like an oil deposit. Or, maybe, the kids will write someday about how these choices traumatized them for life. What the heck. Next up: Donen’s “Bedazzled,” Claire Denis’ “White Material,” and . . . “Outland”?

So kids, if this all comes up in therapy later? Sue me. 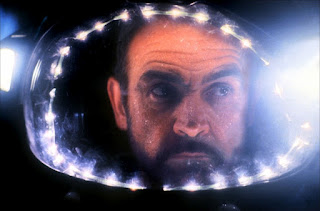