Of course, I’m getting on the “Hunger Games” bandwagon. It’s the most highly pimped movie of the year, and so far reviews are by and large favorable. The adaptation of the first of Suzanne Collins’ trilogy of young-adult dystopian adventure looks as though it will be a hit, regardless of its inherent merit or its faithfulness to its source material.
Collins has been given some guff for her book’s remarkable similarities to Koushun Takami’s 1999 novel “Battle Royale,” and the immensely popular film version directed by Kinju Fukasaku the following year. (The film, although it is one of the top-10 highest-grossing films in Japanese history, took 11 years to be distributed in the U.S., and is still largely unknown here.) Read Neda Ulaby’s NPR report on the controversy here.

But the tradition of a coerced hero or heroine forced to kill or be killed, especially in the context of providing vicarious thrills for onlookers, is as old as gladiatorial combat. The high-noon showdowns of the American Western are a variant, and many of the hundreds of pepla (Italian sword-and-sandal film epics of the period 1957-1965) give us oiled-up body-builder protagonists – Hercules, Maciste, Samson, Goliath, Ursus -- who must fight monsters, destroy entire armies, and dethrone despots. 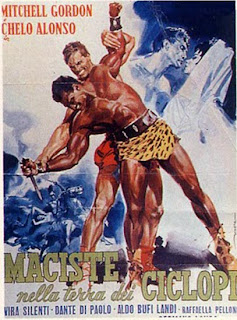 The list of more specific precursors to “The Hunger Games” is surprisingly long. Most of these films are simply formulaic subgenre exercises, focusing on graphic violence and retribution. But the social commentary that enriches “Battle Royale” and “The Hunger Games” can be found in select examples, some of which we’ll dial through below.

The first and most important influence is the 1924 short story by Richard Connell, “The Most Dangerous Game” – required reading for most schoolchildren, and possibly the most anthologized short story of all time, save for the equally gruesome “The Lottery,” also a distinct influence on the genre.

In “Game,” a big-game hunter, Rainsford, falls overboard at sea and finds himself on an island dominated by a master hunter, Count Zaroff, who has grown bored hunting animals and now hunts men instead. Rainsford finds himself elected as the next prey. It doesn’t spoil the pleasure of reading it to know that evil is defeated in the end.

In fact, one of the great pleasures of the genre is the liberation that self-defense grants to the hero in these stories. Once it’s been established that he or she must act ruthlessly in order to survive, the audience members can completely give themselves over to the vicarious satisfaction of seeing rough justice done, without a whiff of guilt.

The story has been adapted more and far less faithfully nearly two dozen times; the best version is the first --

The Most Dangerous Game
Dir: Irving Pichel, Ernest B. Schoendack
1932

The next major development in the idea came from Robert Sheckley, whose 1953 short story “Seventh Victim” became the Italian sci-fi film “The 10th Victim” a dozen years later. Now the game of human hunter and hunted is big business, a globally popular entertainment that has proved so satisfying that it has effectively eliminated war. The antagonists, played by Marcello Mastroianni and Ursula Andress, of course have conflicted feelings about each other, and the camp value is deliberately high.

Peter Watkins is a radical film and television directors whose projects criticize the system in all its aspects – and specifically attacks the media’s complicity in preserving the status quo in the following two features:

Paul Bartel’s ludicrous “Death Race 2000,”based on Ib Melchior’s short story “The Racer,” definitely takes the low road . . . so to speak. Still, the dystopian theme and the idea of bloodsport as a nationally followed pastime is there. Brought to us by the inimitable Roger Corman! With David Carradine! And Sylvester Stallone!

And the same year’s “Rollerball.” Ah, yes. Ridiculous – and one of my favorite guilty-pleasure movies ever. Rich people blow up the few remaining trees for fun, corporations control everything – and I cried when they killed Moonpie.

“Corporate society takes care of everything. And all it asks of anyone, all it's ever asked of anyone ever, is not to interfere with management decisions.”

Another Sheckley story, “The Price of Peril,” written in 1958, eerily predicts reality shows. “Le prix du danger” is the first adaptation of it.

Oh, dear. Stephen King’s take on the template became one of Arnold Schwarzengger’s worst films, including the worst death-puns in recorded history.

The most searing and pointed of these films, and the most successful to date, is “Battle Royale.” Its bleak vision of society, and its focus on the teenage victims of its contest, makes it almost impossible to think that Collins did not derive something from it.

Another worthy mention is “Series7: The Contenders,” starring Brooke Smith, best known for her role as Buffalo Bill’s final, would-be victim in “The Silence of the Lambs.”

In all these films, the central figures have to fight not only others, but an oppressive system that uses violence as entertainment. Maybe the question here is not whether Collins is a plagiarist, but why this very specific kind of fantasy is so prevalent in the zeitgeist. State-sanctioned killing, a rigged system, murder turned to righteous and even revolutionary ends, compulsive mass passive participation – and of course, the irony that the watchers of any of these given films is an echo of the complicit onlookers inside the films. Perhaps these movies are sketches for realities that haven’t been invented yet -- or are just an encoded revelation of how we live right now?

Other entries: a miscellany