Thirty years before Godard's "Breathless," the first New Wave film was completed. A gaggle of Berlin twenty-somethings, starting from scratch and working with few resources, created something remarkable -- "People on Sunday."

It has been referred to in countless textbooks and histories, and I have searched for it incessantly for decades. Finally, the Criterion Collection has come to the rescue, producing a disc last year that reveals the incredible 1997 restoration by Martin Koerber of this hybrid masterpiece.

The gang of largely amateur movie men who put this piece together went on to fame and fortune, by and large. Co-directors Robert Siodmak and Edgar Ulmer went on to create such Hollywood classics as “The Spiral Staircase,” “The Killers,” and "Criss Cross” (Siodmak) and “The Black Cat” and “Detour” (Ulmer). Co-producer and scenarist Kurt Siodmak, Robert’s brother, codified the Wolfman in the popular imagination, as well as “Donovan’s Brain” and other significant sci-fi and horror scripts.

The film’s photographer, Eugen Schufftan, was the most well-known of the group at the time, having developed the optical-effects process that still bears his name, and having already worked on “Metropolis” and Gance’s “Napoleon.” He would later serve as cinematographer on classics such as “Port of Shadows,” “Eyes Without A Face,” and “The Hustler.” His assistant on the shoot – Fred Zinneman, who went on to direct “High Noon,” “From Here to Eternity,” “Oklahoma!” and “A Man for All Seasons.” Not too shabby. 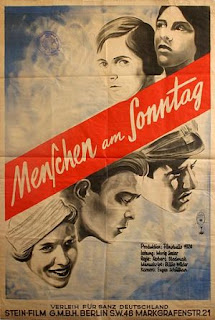 And the script credit itself? There was input from Siodmak's brother Curt, but credit went primarily to Billy Wilder (“Sunset Boulevard,” “Some Like It Hot,” “Double Indemnity”). It would be simple to say that all this genius gathered together is responsible for the film’s success . . . but in fact, all these men faded in and out of the production process as it stumbled along, and they disputed each others’ roles in the creation of the film for decades after. All of them used it as a calling card to further their careers. All of them found themselves in flight from the Nazis shortly after its completion.

So, what makes this film so amazing? First, it’s a seamless blend of documentary and scripted techniques (it proudly declares on an opening title card that it is “a film without actors” – not quite true, but indeed none of the five principal actors are pros). An opening montage of busy Berlin on a Saturday gradually takes us into the orbit of a stylish young man (Wolfgang von Walterhausen) who starts a conversation with a pretty young thing (Christl Ehlers) on the street.

The camera hangs back, shooting from across the square; we have to work hard to pick these two characters out of the mass of oblivious humanity that swirls around them. The film seems to have grasped onto them at random, in the context of the city’s life, and in sympathy we project ourselves into the lives of these unknowns.

Second, the camera is, save for once, never stagebound. It’s alive, unmoored from the tripod. It moves, it tracks, it pursues, it pans restlessly. In sharp contrast to Teutonic stereotype, and the controlled look of a studio-bound style, "Sunday" is loose, letting random seep in.

Wolf makes a date for Sunday with Christl. We move to an interior sequence with his friend, taxi driver Erwin (Erwin Splettstosser) and his girlfriend (Annie Schreyer). Here is the one sequence in which the camera settles down inside a lit set.

Erwin and Annie arguer over whether her hat’s brim should be up or down, which leads to them staying in for the night. As Annie pouts and then dozes, Erwin and Wolf play cards, share beer and cigarettes. In the morning, unable to wake Annie, Erwin joins Wolf and Christl, who has brought along her “best friend” (Brigitte Borchert). The impromptu foursome takes the train out from the center of the city 12 miles southwest to the popular Wannsee lakes recreation area.

Throughout, the film is focused on the mundane. We are, like the characters, subsumed in the particulars – cigarettes, beer, food, money, love, sex, music, sunlight. The concerns of the day and those only.

With an exquisite sense of rhythm, the film keeps interpolating documentary sequences with scenes that advance the simple story, blurring distinctions between the real and the imagined. The quartet play in the water, eat, nap in the sun. A wind-up gramophone distracts them. Wolf flirts unsuccessfully with Christl. Erwin clowns, dozes. Wolf and Brigitte make love.

No sequence stands out dramatically, even the love scene that is discreetly panned from and onto swaying tree branches, a pile of picnickers’ debris, and back to the post-coital couple. None of the young protagonists have marriages, children or connections to weigh them down, and they move from mood to mood with the brisk insubstantiality of the silver clouds that race above them.

“People on Sunday” catches the universality of that brief, ungrounded period of the lives of singles, the sensual emphasis that dominates before irrevocable decisions are made – a microcosm of the larger loss pending in the characters’ surroundings. The summer being filmed, 1929’s, was the last normal, peaceful and prosperous one Germany was to enjoy for more than half a century. The Depression, the Nazis, the Holocaust, the Second World War, the Cold War blues, all swept away everyone and everything you see into their maws.

The camera moves in close to these faces. Ignoring the usual close-up, middle-distance and long-shot framings that were already industry standards, the camera drinks in the expressions of the players. It sits low, dangerously close to the surface of the water they splash in. It winds through the undergrowth – in fact, the Criterion cover till of Christl’s sleeping face, framed by Wolf’s hand, and the sunlit shadows of the shore’s grasses, seems as iconic an image of that time as Man Ray’s 1926 “Kiki with African Mask.”

The only narrative commentary in the film takes place right here. We cut back to the apartment, where Annie still sleeps, and a crumpled newspaper on the table near her displays the headline, “ . . . and so you spend your fleeting days . . .”. The tension is never broken – nothing earthshaking takes place – the day ends, the players part, and they are lost in the crowd. The camera pulls back again and surveys the larger scene, and the final title cards state, “Four million waiting for next Sunday.” For everyone you see, the age of peaceful Sundays is about to vanish forever.

The Criterion release has, of course, impeccable image and new, improved English subtitles. The silent film is accompanied by two scores to choose from – one by Louisville, Colorado’s Monte Alto Orchestra and one by Elena Kats-Chernin, recorded by the Czech Film Orchestra. Gerald Koll’s illuminating “Weekend at Wannsee” documentary covers the filming process; a 1931 short from Schufftan, “Ins Blaue hinein,” is on the disc as well.

A missing piece of film history is here at last, and it stands the test of time.
Posted by BradWeis at 2:53 PM