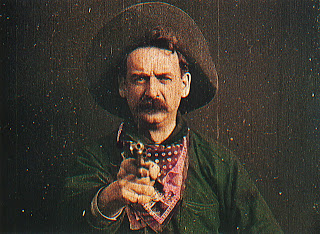 At last. We’ve finally arrived at a selection that can really be called a movie, in the popular sense of the word. Surprisingly, it still holds the viewer’s attention. For better and for worse, it’s the template for all the commercial films that come after it.

“The Great Train Robbery” works because it has one thing to do and it does it – it tells a story. As a bonus, it piles on techniques and genres with gleeful abandon. It’s a Western, a crime film, a caper flick, an action movie, a suspense film, a melodrama, a cautionary tale – and there’s a touch of comic relief as well.

It mashes together studio work, location shooting, cross-cutting, a moving camera, special effects, stunt work, and even double-exposure composite editing (or matte shooting, as it came to be known).

Although influences such as English filmmaker Frank Mottershaw’s “A Daring Daylight Robbery,” a multitude of pioneering efforts from England’s “Brighton school” and Porter’s own earlier narrative shorts like “The Life of an American Fireman” have been cited, “The Great Train Robbery” is really unique in itself.

There are none of the later-typical title cards with narration or commentary to guide the viewer. There’s nothing extraneous. The pacing and the framing are top-notch. Each shot leads logically to the next, pulling us along with the narrative. It’s practically a how-to film.
The action begins immediately, as two bandits hold a railroad-station telegrapher at gunpoint (studio) while a train is seen pulling in through the station window (matte shot). The mix of realism and make-believe is still startling. The stage door flaps as they exit, requiring a second pull – as the scenery wall shudders. 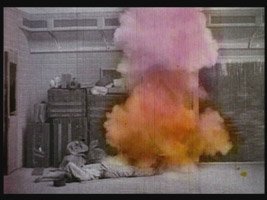 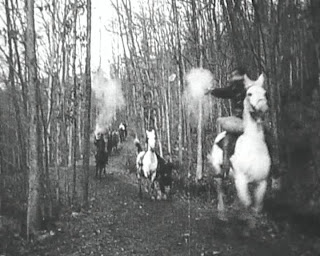 Two last notes: 1) the great, iconic and seemingly nonsensical clip of the chief bandit emptying his six-shooter directly into the camera takes a great threatening leap forward and backward at the same time – scaring the untrained minds of the first audiences, and finding currency with its celebration of gratuitous violence (a shot echoed deliberately at the end of Scorsese’s “Goodfellas”). Helpfully, distributors were informed that they could splice the shot onto the beginning or the end of the film.

2) The passenger shot by the bandits, the tenderfoot who is forced to “dance” by gunshots (and executes a pretty nifty shuffle towards the camera), and the bandit who falls from his horse is the man who will become the first American movie star. Max Aronson, an aspiring Jewish actor from Little Rock, Arkansas, did the work. He was so enamored of what he made with Porter that he Anglicized his name to Gilbert M. Anderson and became “Broncho Billy” – the star of 148 short Westerns between 1907 and 1916, and a hero to the boys of that generation. 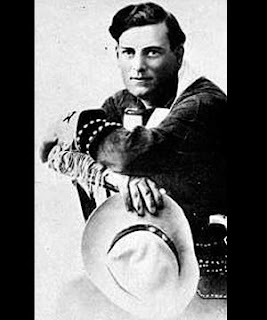