I am a total wuss. I love scary movies, but I can’t stand gore. What I am I supposed to do?

As Halloween is fast approaching, for me and for the young and the old and the incurably squeamish, here’s a series devoted to recommending horror films that will terrify you without turning your stomach.

I’ve disqualified myself from seeing almost every horror film made over the past 40 years. The gruesome violence, the explicit gut-churning effects, the focus on unmotivated torment and torture, makes me sick, that’s all. It’s not some high-flown philosophy, it’s visceral.

Still, horror movies enrapture me. Clutching my date at the drive-in, rolled up in a sleeping bag on the basement floor as a kid watching “Creature Features” on TV late into a Saturday night, I loved all the offerings that pre-splatter era had to give.

My definition of horror is pretty straightforward. It’s anything that deals with our darker impulses – fear, hate, dread, despair, bloodlust, evil. It has two essential elements – it deals with factors outside “normal” experience (within us and/or outside of us), and it is threatening – a kind of perverse anti-faith. THERE’S SOMETHING OUT THERE, AND IT’S AFTER US. Take away the supernatural element and you have the crime film, the thriller, the dark psychological drama – “M,” “Fatal Attraction,” Hitchcock. Take away the malevolent element, and you have the fantasy film.

The best horror films want to rip off the tops of our heads and make us peer within at what suppressed impulses we harbor. It wants us to contemplate a universe in which death, decay, corruption and chaos have a role. It wants us to look at the monsters and ghosts that populate our collective unconscious. Sometimes the horror film offers us catharsis and redemption, and sometimes the gate clangs shut at the end, trapping us in madness and doom.

The films in the following installments are purely personal choices, and leave out many favorites of others, I’m sure. The choices get dicier as we get closer to the modern era – some revolting selections have made their way past my sick-o-meter. In fact, if I had been born 30 years later, I’m sure I wouldn’t have half the trouble I do with franchises such as the “Nightmare” series, “Halloween” and “Friday the 13th” and “Saw” and “Scream” and “Chucky” and . . .

So let’s take a look.

Without going into horror’s literary prehistory, let’s just say that at the turn of the last century, it hung heavy in the air. Mary Shelley, Edgar Allan Poe, Bram Stoker, the Grand Guignol, Robert Louis Stevenson, Sheridan Le Fanu, H.G. Wells and Ambrose Bierce had contributed or were contributing to the pile of literature from which the first crop of horror film would be gleaned.

Additionally, Freud's initial psychoanalytic theories were creating a method and vocabulary for exploring and discussing the human mind. For the first time, Western culture had a way to conceive of identity that went past the simple Manichean conception of a struggle between good and evil, leading us into a tangled landscape choked with psychic undergrowth.

The Germans seem to have perfected the approach first. The moral miasma first articulated by Frank Wedekind and Arthur Schnitzler, Baudelaire, Wilde and other fin de siècle figures roots and blooms cinematically in the crude early efforts of Paul Wegener. Hints of the dark, brooding tone to come can be found in the European crime and conspiracy serials such as Louis Feuillade’s “Fantomas” from 1913 and Fritz Lang’s “Die Spinnen” of 1919.

Still, it was director Robert Wiene who matched the disturbing content of “Caligari” to the tool kit of Expressionism, creating a style that was to permeate not only the horror film, but film noir and other genres as well. Wiene, Wegener, Murnau, Leni – this quartet was setting the stage for everyone after them. And, in keeping with an already-established trend of Hollywood serving as a magnet for foreign talent, Universal's Carl Laemmle brought Leni over to helm two more distinctive features -- "The Cat and the Canary," the prototypical "haunted house" film, and "The Man Who Laughs."

A common thread that runs through most of these film is the use of actor Conrad Veidt. His willowy, anguished Romantic persona would be put to great use as a horror protagonist. Beginning as the charmed Cesare in "Caligari," he moved on to larger roles in"Orlac," "Student of Prague," "Waxworks" and "The Man Who Laughs" (his makeup as the anguished Gwynplaine in the latter film would become the template for the look of Bob Kane's iconic Joker in the "Batman" comics.) Eventually forced out of Germany by his opposition to the Nazis, he would wind up being best remembered as a screen villain -- the definitive Jaffar in in Korda's 1940 "Thief of Baghdad" and the despicable Major Strasser in "Casablanca." 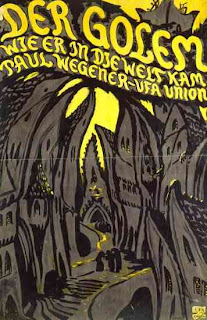 The Golem: How He Came into the World
Paul Wegener, Albert Steinruck
1920 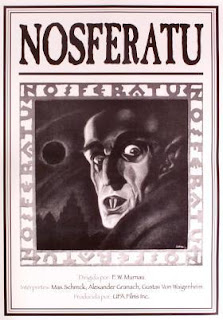 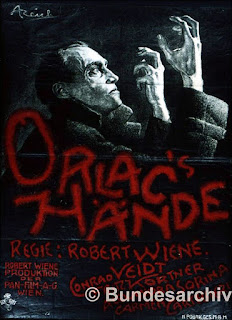 The Hands of Orlac
Robert Wiene
1924 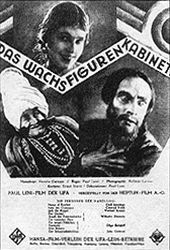 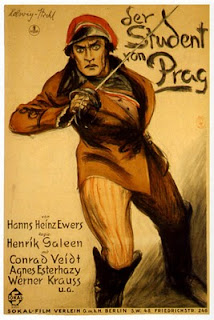 The Student of Prague
Henrik Galeen
1926 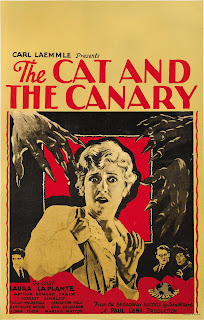 The Cat and the Canary
Paul Leni
1927 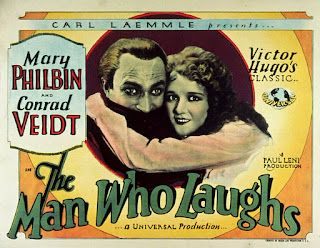 
NEXT TIME: The Father of Freaks and the Man of a Thousand Faces
Posted by BradWeis at 3:02 PM