'Robin Hood' vs. Queen Latifah! plus, the drive-in is open! 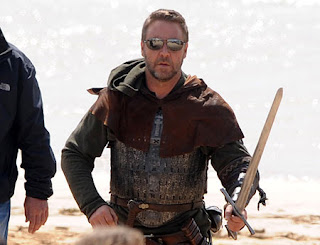 It really would have been better for everyone if Russell Crowe and Queen Latifah had just traded lead roles in the two big films coming out this weekend. Why?

a. Queen Latifah would kick some serious butt as Robin Hood. C’mon, if she was coming at you with a sword and axe and staff and bow and arrow and all that, you’d run. You would!
b. I would much rather see her get it on with Cate Blanchett than I would Russell Crowe.
c. Crowe, despite his beefcake status, is a good, dedicated actor. It would be a lot more interesting to see how he would play his character’s gently blossoming romantic relationship with an NBA player.

Oh, well, dream on. Let’s look at our choices.

This one looks about average. Let’s look at Trailer #2 of three, as it contains the most information --

In keeping with the spirit of Hollywood instinct to move always toward blockbuster grandiosity, it looks a tad inflated. Lots and lots of slow-mo ultraviolence, grimacing bloody muddy agony, clenched hair, clenched fists, hair clenched in fists, the ring of massed voices on the battlefield and the whoosh-woosh of eight jillion arrows descending to their targets.

On the plus side, we have some expert actors – Crowe, Blanchett, Max von Sydow -- Danny Huston, William Hurt and Eileen Atkins, none of whom we see in the preview. We even have an outrageously eye-popping, poofy, over-the-top turn by Oscar Issac as the evil Prince John (“I DECLARE him an OUTLAW!”) and Matthew Macfadyen as the super-badass, club-swinging Sheriff of Nottingham.

But what the hell is Robin’s political orientation? He roars out “liberty under law” to the Merry Men at one point. Is he a libertarian or something? Does he scream “Ask first to hunt or fish on private land” during the big climax? Not sure. Anyway, it’s poor folks versus the mean old nobility – I’m down with that any day.

Ridley Scott directs this one – he’s become our go-to guy for spectacle. Which is too bad, really. He’s got a great visual sense, is a master storyteller and really respects his actors. In there ways, he reminds me of Anthony Mann, who went from taut noir dramas to sweeping, psychologically penetrating Westerns to overblown epics at the end of his career.

Scott faces the same challenge – he’s got the goods, the guts and the leadership to pull these big projects off, but he constantly risks getting swamped by the sheer size of the projects. Will “Robin” work? It looks as unwieldy as a two-handed broadsword.

1. If you are a big lady, you are scrappy and have a sense of humor.
2. If your girlfriend is skinny, then she is a shallow whore who will screw you over in a heartbeat.
3. Dudes can’t stop thinking with their private parts, at least until your relationship with them blows up and they realize how much they’ll miss their good thing.
4. Queen Latifah is smart and watchable.

Last but least, “Letters to Juliet”:

No. No no no. Damn, white people, come on. Your reputation for being boring is bad enough, without adding this to the pile.

Can’t we just leave poor Vanessa Redgrave alone? In the past 14 months, she’s lost her daughter, and both of her siblings. Must we put her in this Harlequin romance as well? (OK, she signed a contract – and she’s a little kooky.)

People, we can do better than this. Ancient flame rekindled, two young people butting heads learn to love each other – it’s Shakespeare Light. This will play forever on some cable channels for lonely folks. Wait ‘til it gets there.

THE DRIVE-IN IS OPEN! 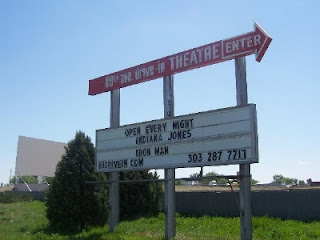 The best news is, the drive-in is open! There’s only one left, and if you’ve never been, you really should go.

The 88 Drive-In is, logically enough, located at 88th Avenue and Rosemary Street in Commerce City , in an industrialized area near the old Rocky Mountain Arsenal.

A perfect double feature is still playing there, until further notice -- "How to Train Your Dragon" and "Iron Man 2." For those of you too young to remember, a "double feature" is two movies for the price of one, without having to sneak nto a different auditorium!

Is the drive-in, in general, an exemplary film-going experience? In technical terms, not so much – the screen is not particularly bright, and you pipe the sound in via your car radio. As a cultural experience, it’s fantastic.

I grew up with drive-ins, back when the Denver metro area was littered with them – the Lake Shore, the Wadsworth, the Cinderella Twin, the Holiday , the East 70, the NorWest, the Evans. They were the places you could go with your kids – most theaters had a playground area and a snack bar, and when the kids were tired you just put them in their jammies and they passed out in the back seat.

Most places charged you by the carload, and if your dad had a pickup truck, you would cram it with neighbors and friends, park it backwards, and sit in the truck bed and watch under blankets.

For a good feel of how it was, give a listen to the track “Pedro and the Man at the Drive-In” from Cheech and Chong’s 1973 “Los Cochinos” album. Otherwise, do yourself a favor – pack some food, booze, drugs and condoms, and partake of the ruckus.

There is a slew of new work at the local cinema boutiques. At the Chez Artiste, we have “The Secret in Their Eyes”:

It won the Best Foreign Film Oscar this year, and looks smart and complicated.

At the Mayan, we have “The Eclipse.” Is he a kooky guy? Does he see a ghost? Hmmm:

Then there's "Sweetgrass." It's about sheep. It's 'sposed to be riveting. Ahem.

At Starz, new is “The Exploding Girl”:

More and more, theater owners are finding creative new ways to utilize their spaces. For instance – are you into drum and bugle corps? I'm not. “DCI 2010: The Countdown” can be found in a few multiplexes.

“Sons of the Fallen: A Live Tribute to Our Military Heroes” takes place at 6 p.m. in the Century Boulder theater. It features the music of Clint Black, and will provide live coverage from a camp in the Rocky Mountains that serves the children of military personnel killed in the line of duty.

Down at the University of Denver, the final entry in the Italian Film Fest series is “Ex,” a comedy from 2009 by Fausto Brizzi. It plays at 8:30 p.m. in Davis Auditorium . . .

Love, laughter, talking fast and using your hands a lot when you speak, soulful montages of people thinking while a romantic ballad plays in the background, the camera swooping into each face . . . eh.

Opera fans can catch an encore presentation of the Metropolitan Opera’s broadcast of “Armida,” starring Renee Fleming, at 6:30 p.m. at the Century Boulder. She's a witch! And she gets mad at no fewer than six tenors. It's by Rossini: 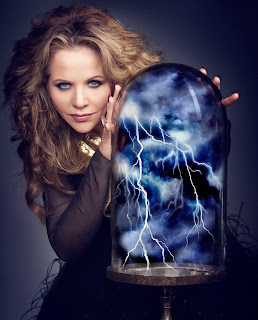 At 7 p.m. at the Starz Film Center, you can catch Eric Rohmer’s 1983 “Pauline at the Beach.” It’s followed by a wine and pastry reception and discussion, all sponsored by the Alliance Francaise. It's typical Rohmer, love and touching and Frenchness and I'm nodding off:

At the Boulder Theater at 8 p.m., you can see “When You’re Strange: A Film about the Doors”:

This has a lot of buzz, but how big is this? I admire the Doors but do not love them. I went to Jim's grave. I was sad. Are we going to learn anything new?

The Thin Man Tavern in Denver keeps its Wim Wenders festival going with an 8 p.m. showing of “Lisbon Story” from 1994:

How come I never heard about this? It looks wonderful. Wenders has a love of life that comes through in everything he makes, no matter how dark or cynical he can become. Wow.

It seems to me that she embraces the same kind of philosophy regarding her documentary investigations that I do toward my writing -- she lets it take her where it will, and she is not afraid to engage personally with it. " . . . I always refer to 'subjective documentary'. It seems to me that the more motivated I am by what I film, the more objectively I film," she is quoted as saying. This looks interesting.

At Denver’s Bug Theatre, the Emerging Filmmakers Project convenes for its monthly session at 8 p.m. 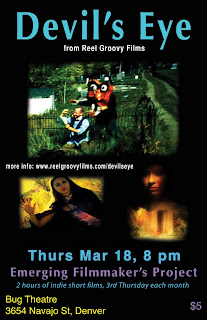 So, try to be picky this week -- avoid gettin bored to death. Sheep. Emotions. Bleah.
Posted by BradWeis at 2:01 PM