The NFR Project: 'The Clash of the Wolves' 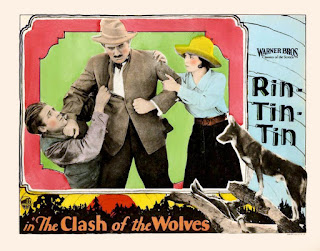 The Clash of the Wolves

The Clash of the Wolves represents the apex of the career of Hollywood canine star Rin-Tin-Tin. This remarkable animal became the leading player in doggie dramas for the silver screen, in the course of which he saved the Warner Brothers studio financially.

“Rinty” was found, newborn and hungry, on a World War I battlefield by Corporal Lee Duncan. Duncan brought Rin-Tin-Tin back to America with him after the war. When he learned how trainable Rinty was, he decided to get him into motion pictures. After much time spent trying to ballyhoo Rinty’s talents in Hollywood, Duncan got a break with Where the North Begins (1923), a film with the brave-hearted dog at the center of the narrative. Rin-tin-tin became a star.

Rinty, a German Shepherd, was often described in his films as being part-wolf, something he is pretty obviously not. Still, the primary plot of many a Rin-Tin-Tin film runs as follows: wild animal befriended by human, becomes loyal and tame, saves the protagonists. Such is the case with Clash of the Wolves.

In it, Rin-Tin-Tin is Lobo, the leader of a wolf pack who moves his charges down into the Mojave Desert after a forest fire destroyed their natural habitat. Lobo has plenty of executive skills and is by far the most together character in the film. It isn’t until after he gets a cactus thorn stuck in his paw that he is run across by Dave, the protagonist, an erstwhile borax miner. Dave removes the thorn and, “Even as, ages ago, the first wolf surrendered to man’s love, so Lobo forsook the wild and became Dave’s dog.”

Inevitably, a claim-jumper schemes to take over Dave’s rich borax strike. It’s up to Lobo to save the day! And he does, with the vivacity of a seasoned performer.

The NFR is one writer’s attempt to review all the films listed in the National Film Registry in chronological order. Next time: ‘The Freshman’.