How to Write a Film History Book 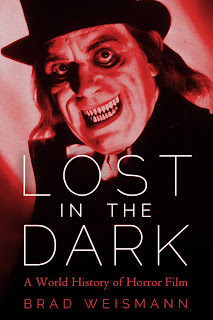 I remember marching off with my class to our elementary school library for the first time. We were set free in a room full of books, one of which we could select and check out. It was wild. Any book we wanted? I scanned the shelves. I saw a book with my name embedded in it – Ray Bradbury’s S is for Space. I grabbed it. Through this happy act of juvenile self-regard, I was introduced to the legendary writer’s work. I was immediately hooked.

I think, after that, I always intended to write a book. I knew I wanted to see my name on the spine of one, just like my namesake.

Fast-forward through several decades of my work as anything but a writer. I dropped out of college and started doing stand-up. After 15 years of pursuing that dream, I restyled myself as a journalist. From that I evolved into a freelance writer, and finally found the time to work on a book. But what about? There are those who advocate writing to a specific market, and others who counsel following your instincts. Both are correct.

I looked at my writing output to date. It was chockful of discussion of horror film. At the same time, I searched for a book that was a comprehensive guide to horror films, from the beginning to today, something that included all countries’ contribution to the genre. I couldn’t find one. I put two and two together. I figured on writing something I was genuinely enthusiastic about, that could also sell. I wanted to write a book that would serve as a reference in libraries, that could be used as a guide in educational institutions, that the average reader would find entertaining and informing.

Even though I’m offering my experience here, I would say that if you really want to write a book for the first time, just jump right in and start. Ignorance is bliss. If you have no idea of the scope of your project, you can march forward with confidence, unaware of the incredible amount of expansion and rewriting to come. (All right, a few recommended guides are listed below.)

It doesn’t matter how bad you think you are doing, get it down on the page. It will eventually be improved so that it is unrecognizable. If you can’t find the right word, get as close as you can. It will come later to you. Just be kind to yourself and emit words no matter how.

As I was writing a non-fiction narrative, I had to construct a scheme, a plan of attack, a table of contents (all these documents are sought by potential publishers, as it turns out. They want to see if you have any sense whatsoever of being able to produce something that is intelligible, entertaining, and perhaps even popular and/or competitive). I did not start with a completely thought-out outline of the history of the horror film. I had clumps of films, and clumps of dates, and a skeleton filled itself out as my researches progressed. I even added three chapters towards the end of the project to make sure I covered all the bases.

I worked and reworked each chapter, over and over again. At the same time I was reading reams of books and watching tons of films, immersing myself in the subject. Gradually, it took shape. And about four years.

Eventually, I had completed enough of a book (an outline and two sample chapters) to send off to publishers and agents. I worked hard to create a thorough and well-considered package of the material, in the hopes that it would appeal. You will spend a significant amount of time figuring out how to market your book effectively.

I sold the book myself to an academic publisher. It was my 100th and final submission.

Speaking of marketing, here's the link to my book, on Amazon: https://www.amazon.com/Lost-Dark-World-History-Horror/dp/149683321X

Of course, the most current Writer’s Market you can get a hold of;

How to Write a Book Proposal, Michael Larsen

How to Sell, Then Write Your Nonfiction Book, Blythe Camenson

Email ThisBlogThis!Share to TwitterShare to FacebookShare to Pinterest
Labels: history