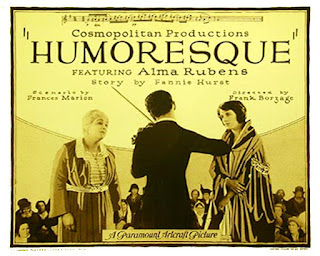 Schmaltz. It’s a Yiddish word that literally means chicken fat; my wife can remember her grandmother keeping a jar of it handy in the fridge, for frying or simply for spreading on bread. It’s an acquired taste, strong and cloying, but an integral part of home life for most Jewish-American families (especially for those for whom butter was dear, or for those who observed the law of kashrut, which forbids the mixing of dairy and meat). Perhaps this is how the word grew out of its original usage and came to mean any entertainment larded with excess sentimentality. Humoresque is pure schmaltz.

One of the oldest jokes to still kick around from vaudeville days is, “Doc, will I be able to play the violin after this operation?” “Certainly.” “That’s great! I didn’t know how before!” The gag stems directly from the enormous, nation-wide success of Humoresque. (The Marx Brothers’ first film, now lost, was a 1921 parody titled Humor Risk.) The story of the travails of an impoverished musical prodigy is a tribute to the spirit of the immigrants who fought their way out of squalor; it’s also a monument to the monstrousness of mother love.

The screenplay was adapted by Fannie Hurst from her own story. In those days, magazines were plentiful, their pages crammed with freelance contributions, and there were many well-known and popular female authors whose work was adapted to the screen, including Hurst, Anita Loos (Gentlemen Prefer Blondes), Edna Ferber (Showboat), and Mary Roberts Rinehart (The Bat).

Humoresque is set and shot in New York City’s Lower East Side, still a teeming tenement in the 1920s. Papa Kantor works in a shop on the ground floor, blithely forging antiques. Upstairs, his large brood is crowded into a cold-water flat outside of which the elevated train tracks run, so close you could touch it.

Despite these circumstances, the home atmosphere is warm and cozy — in Yiddish, hamish. While Mama Kantor rules the roost, little Abraham plays down in the street, when he’s not dodging anti-Semite kids who beat him up and chalk a dollar sign on his back. In love with Abe is little Gina, who’s so poor her only pet is a dead kitten she pulled out of the garbage. (I’m not kidding!)

While to Abie’s father a cash register is “beautiful moosic” (the film manages to affirm many more Jewish stereotypes than it dispels), Abe falls in love at first sight with a violin. He begs for one. His mother’s dream suddenly comes true. Mama Kantor is the classic Jewish mother — short, stout, emotional, smothering. “My baby – a musician!” she exclaims.

It’s important to remember that in this period, excellence in the arts was a pathway out of poverty for scorned minorities. Talent sometimes overrode prejudice, and many star-struck parents pushed their children relentlessly to make something of themselves. Mama Kantor, the real head of the house, overrides Papa’s reluctance and gets Abe his violin. “Sublimest (sic) of all is the faith of a mother,” reads a title card.

Of course, Abe grows up to be a brilliant concert violinist, performing literally for the crowned heads of Europe. (As he plays, Mama Kantor buttonholes the servants, opening her locket to display a baby picture of Abe, naked on a bearskin rug. Oy.) Abe returns home for a triumphant benefit concert for the neighborhood. (The prolific and gifted silent-era film composer Hugo Riesenfeld wrote a score for the film; it would be great to find it and hear it in sync with the movie.) He opens with the Kol Nidre, the ancient and heart-tugging melody that opens the High Holy Days. His signature piece is Humoresque, presumably the well-known Dvorak piece of 1894.The crowd goes wild — he gets 15 encores.

A big-time booker shows up with a contract, but Abe can’t sign it. “I just signed a contract with Uncle Sam,” he says proudly. He’s off to WWI. Needless to say, Mama is not pleased. “Cut out my heart – but leave me my wonder boy!” she cries. He responds, “You wouldn’t want me to hide behind my violin?” This is where the love of a mother turns really scary. She can’t let go of him. She’s kissing him on the lips. She makes him sit on her lap! In his uniform! This is the kind of stuff that Philip Roth would break down for us decades later.

He leaves his mother holding his violin, a painfully obvious Freudian moment. Abe comes home from the war with a shoulder wound and a psychological block. He’s afraid to try and play again. An operation fixes the physical problem, but not the mental. It takes his faithful girlfriend Gina (remember her? She hangs on at the edges of the film, ceding center stage largely to Mama) to break him out of his fear, and, frankly, his mother’s domination.

Frank Borzage’s direction is unremarkable technically. There were two kind of studio directors at the time — artists who used the camera in a bravura way, and those who simply stuck to telling the story as unobtrusively as possible. Borzage is not a visual innovator, but he was great at getting in close and conveying relationship and emotion. This would serve him well later in a string of hits featuring Janet Gaynor and Charles Farrell (Seventh Heaven, 1927; Street Angel, 1928; Lucky Star, 1929). Borzage would pick up Oscars for his direction of Seventh Heaven and 1931’s Bad Girl.

In a more aware age, it’s easy to assign pathologies to the characters, but at the time this was a heart-warming, heart-wringing success that ran at New York’s Criterion Theatre for an amazing 12 weeks. It dates terribly today, but Humoresque spoke clearly to the audience of the in what was called Mammaloschen – the mother tongue.

The NFR is one writer’s attempt to review all the films listed in the National Film Registry in chronological order. Next time: Maurice Tourneur’s ‘The Last of the Mohicans.’