Presidents’ Day is jacked up. To begin with, it’s not on the right day. Or days.

As a celebration, it’s a conflation of the birthdays of two iconic American presidents: Abraham Lincoln (#16) and George Washington (#1). Lincoln’s birthday is on February 12, 1809; Washington’s is on February 22, 1731, except Washington’s was really on February 11, 1731 as the British Empire didn’t switch over to the Gregorian calendar until Washington was 21, in 1752. Then Congress changed it and since 1971, it’s taken place on the third Monday of each February, so now their birthdays can be commemorated anywhere between February 15 and February 22 of any given year. Got me?

And how IS it celebrated? We don’t really party; we don’t dress up like Abe or G Dubs. We go shopping, which was perhaps the whole point of the Uniform Monday Holiday Act to begin with. Before then, each day was observed on its own.

Perhaps I remember this more vividly because it was a constant in school for me through age 10. The twin icons of American self-definition loomed over the second month of the year in the classroom. We were living at the pinnace of the American Century, and Washington and Lincoln, neither yet interrogated by more probing historians. They were our two secular saints, our patriarchs and role models. Colorful posters of them unfurled above us; we drew them, played them, we memorized their words. For a brief, illusory time we had one version of history, relaxed and assured, unrevised and incorrect.

As cinematic material, the two men couldn’t been more different. Lincoln is most congenial subject of biography, and fable, that American history has yet spawned. A lifetime is not enough to absorb all the material examining him. Washington lies at a further remote, before photography and other voracious technologies were there to document him as obsessively as Lincoln was.

We can’t construe versions of Washington in the public imagination very well. He is instantly recognizable — Zeus-like, imperturbable, stiff . . . stodgy. Colorful does not enter into it. He had wooden teeth and slaves (and in fact, Washington’s slaves weren’t even a part of our era’s history lessons. Mount Vernon evidently came from IKEA.) Not a lot to work with there. In numerous historical films, Washington just kind of parachutes awkwardly into the scenario to lend a sense of authenticity (“Hey, look! It’s Washington!”), usually to endorse a hero, inspire somebody, or seal the deal on a happy ending.

In keeping with Washington’s proverbial seriousness, the actor who have played him have uniformly possessed a sense of gravitas. That is, they have to play a stiff. The first guy to make a thing of playing Washington was Joseph Kilgour, who did so in four films between 1909 and 1915, the first of which was Washington Under the American Flag.

Prolific British character actor Alan Mowbray played him three times, most notably in Alexander Hamilton (1931), a vehicle for actor George Arliss, who made a career out of playing historical figures. 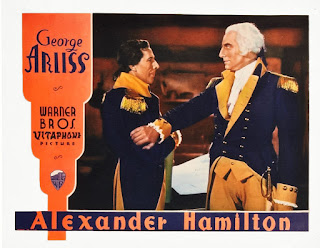 Another Englishman, Montagu Love, played him twice — most notably in the Oscar-winning 1939 short Sons of Liberty, starring Claude Rains as Haym Salomon, patriot and financier of the American Revolution.

After this, there is scant evidence of the first Chief Executive on the screen. When he did return, it was almost exclusively to television — Washington could not generate enough charisma to sustain a feature film. John Crawford makes a brief appearance as Washington in John Paul Jones (1959), the only visual evidence of which scorns the historical accuracy of the scenario. 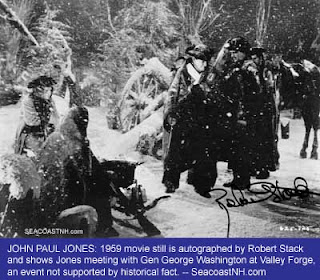 Long-time bad-guy Myron Healy played him in an episode of the bizarre hippie-rebels-fight-undercover-for-the-American-Revolution 1970 TV series, The Young Rebels (“Suicide Squad” 10/25/70); Will Geer played him for laughs in a two-part episode of the TV sitcom Bewitched (“George Washington Zapped Here” 2/19, 26/1972).

It took about 200 years for us to begin to grapple with the idea of Founding Fathers as non-mythical characters — pushed no doubt by both the Bicentennial and Gore Vidal’s provocative counter-story in his novel Burr (1973) and subsequent Narratives of Empire historical fiction series. Richard Basehart was craggy but troubled in the 1975 TV movie Valley Forge; Peter Graves required minimum adjustments to appear as the Father of Our Country in 1979’s The Rebels, part of an immense and awful TV miniseries that attempted to film all of John Jakes’ long Kent Family Chronicles pop-history book cycle.

Finally, a healthy effort to sex up Washington took place in the 1984 TV miniseries George Washington, featuring Barry Bostwick as G.W. “No one knew of the secret desire that burned within him!” the promo exclaims, promising to tell us his “little-known, intimate story.” Evidently the writers inserted a life-long, steamy, illicit, bodice-ripping romance between Washington and childhood friend Sally Fairfax, played by Jacklyn Smith, to try to keep us awake. A soporific sequel, George Washington II: The Forging of a Nation, followed. Alexander Hamilton is portrayed here as an unsympathetic, snobbish, disruptive character, a role he was routinely relegated to in films about the period until Lin-Manuel Miranda’s huge Broadway historical hip hop musical hit, Hamilton, hit the stage in 2015.

More recently, Jeff Daniels lent a doughy earnestness concealing a solid will to the character in the TV movie The Crossing (2000), concerning the famous crossing of the Delaware River to attack the Hessians on December 26, 1776.

Kelsey Grammer plays a rather oblivious Washington in Benedict Arnold: A Question of Honor (2003). David Morse put on the most convincing impersonation to date in the HBO miniseries John Adams (2008). His Washington is grumpy and taciturn, a reluctant icon. Plus, it always looks like his teeth are killing him.

Washington suddenly becomes more malleable as a concept. Voiced by Michael Santo, he is more of an action hero in Liberty’s Kids, a 40-episode animated PBS half-hour from 2002 about the American Revolution, with teenagers in the foreground, suspiciously like 1970’s live-action Young Rebels. In AMC’s TURN: Washington’s Spies (2014-2017), Ian Kahn plays Washington as a cunning schemer.

The thrust of this series, the story of an American double agent who must violate the laws of heaven and earth and risk scorn in the name of a just cause, is a direct throwback to the original notable exploitation of Washington as a literary character — none other than James Fenimore Cooper’s second novel, and his first international success, 1821’s The Spy. In it, peddler Harvey Birch is a double agent for Washington, who whisks in and out of the novel in the guise of the mysterious “Mr. Harper.” The prototype of the espionage and spy genre starts with the fictional assent of the Father of Our Country.

TURN: Washington’s Spies is also a kind of Age of Enlightenment/John le Carre mélange crossbred with the Smudged-Faced School of Historical Reenactment, to which is added a soupcon of Tarentino. It is, then, the embodiment of the formula for the successful broadcast pseudo-historical saga of today. The same kind of approach is taken in the History 2015 miniseries Sons of Liberty, in which Jason O’Mara plays Washington as a kind of a badass.

Washington figures in obliquely with the other Founding Fathers in the hit pseudo-historical thriller National Treasure (2003); a key scene in the film takes place at Mount Vernon. On the Fox TV series Sleepy Hollow (2013-2017), Washington is a necromancer; in “The Washingtonians” episode of the anthology Masters of Horror (1/26/2007), he was the founder of a cannibal cult. In the “Capture of Benedict Arnold” episode (12/12/2016) of the time-travel series Timeless (2016-2018), he’s a dick.

In the end, it took Christopher Jackson onstage in Hamilton to make Washington a magnetic and dynamic presence. When, decades hence, the show stops running, some future stars will fight to embody Washington yet again on screen.