Film review: 'Shoplifters' is a visit to a human place 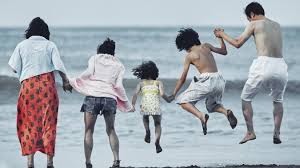 Here’s a perfect test for someone about whom you may have doubts. Take them to see Shoplifters. If they don’t enjoy it, they are a replicant.

Yes, a human-scaled film full of life and feeling is becoming as exotic as a Voight-Kampff empathy test right out of Blade Runner. Hirokazu Kore-eda’s Shoplifters is exactly that. It’s rich, it’s complex, and it makes you think.

The story is deceptively simple. A group of people on the margin, living together as a makeshift family in squalor, run across a neglected, freezing child on the street and take her in. Eventually and inevitably, their togetherness frays and falls apart.

The film has been described both as “heart-warming” and “heart-breaking,” which only highlights the limitations of both phrases. It shows you everything, and refrains from judging its protagonists. Others have compared this film and more of Hirokazu’s films to the slow, deliberate, and intimate work of director Yasujiro Ozu. If I had to compare it to the work of any previous director, I think of Jean Renoir, whose dictum “everyone has their reasons” certainly applies here.

Hirokazu’s brilliant, subversive storytelling gives us a household of six sharply observed characters, four adults and two children. They live in a tiny, crowded house surrounded on all sides by blank-walled, towering condos. None is related by blood to each other. All are engaged in some kind of illegal, or at least skeevy, way of getting by. And yet there is bliss in their cramped little universe, an affection and acceptance that is not found outside of it.

The group’s idyll is captured beautifully by Ryuto Kondo’s cinematography — the actors seem lit from within. No fancy moves here, no bravura shots, save for one exquisitely painful moment involving a bag of oranges bursting free on the pavement. The ensemble acting is superb, though I would single out actress Sakura Ando, who is both self-possessed and vulnerable enough to really be alive in front of the camera at all times. Her quiet emotional power is amazing.

This family by choice is not toxic, as are the “natural” families are depicted. Here, the well-intentioned system sustains its weakest members only by accident; when it does step in to restore order, it destroys everything. Yet Hirokazu doesn’t bulldoze his characters into convenient positions of victimhood. Everyone has their reasons in Shoplifters, but they are also crippled with flaws and blessed with wisdom. They suffer, they give, they move on. Above all of this hangs a searing desire for the belonging and sense of identity and safety their relationships gave them, without a hypocritical sense of hope to go with it. The film ends with an image that puts the question in the lap of the viewer: why is it like this? What can you do?

Oh, and Shoplifters has subtitles. Now, normally I would assume this would throw most people off, but my description above cold also fit Alfonso Cuaron’s Roma, which is a heavy contender for Best Picture at the Oscars — and is in black-and-white to boot.

This is welcome news, because it means that we as viewers can get over these supposedly marketing-averse artistic choices and really enjoy and get a lot of something that isn’t a bland comedy, graphic horror film, another superhero saga, or worst of all a boring-ass “serious” drama that goes down like castor oil. I’d like to think we’re getting sick as a culture of the flashing screens, blare and blurps of the digital pseudo-reality being shoved down our throats. Movies such as Roma and Shoplifters show us the way back to analog, human reality.