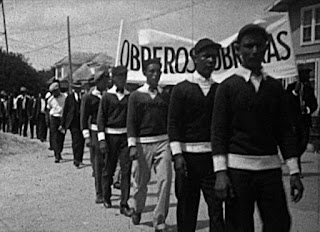 We all pretty much agree on what a movie is. It’s a story shown on film, made up or real, one-and-a-half to two hours long. Right?

It’s easy to forget that cinema is inclusive and democratic. It consists of whatever its creator chooses to record or fabricate. Surrounding mainstream cinema is a nimbus of weirdness called “paracinema,” which consists of interlocking galaxies of B-movies, educational and industrial films, exploitation fare, and experimental works. Beyond that, but still on the spectrum, are such things as home movies — the most striking and perhaps most significant of all kinds.

Antonio Rodriguez Fuentes and his wife Josephine Barrera raised five children in Corpus Christi, Texas, in the early part of the 20th century. They married in 1918, and survived the devastating hurricane of the following year. He worked as a clerk for the Mexican Consul; both were deeply involved in the Hispanic community. Among his hobbies was filmmaking.

The idea of amateur filmmaking had been around since at least 1898, which was only three years after the Lumiere brothers gave their first screening. Still, it gave birth to a workable camera in 1922. The French cinema tools company Pathe developed a 9.5-mm format called “Pathe Baby” that was meant to bring theatrical films into the home, but provided a portable camera and film for the user as well. It never caught on in the U.S., although its use was widespread across Europe. (In America, the 16-mm camera would come along in 1923; the pervasive 8-mm made its debut in 1932.)

Fuentes owned one, and he left behind a double-handful of home movies depicting his family’s life during the period. Undoubtedly, a big reason these are in the Registry is that it represents a previously unseen part of American life — the Mexican-American experience, unfiltered by prejudice or condescension.

That the movies have little to do with racial identity or socioeconomic truths is illuminating in itself. These were relatively affluent folks, but no millionaires. Their movies record what every other American family recorded — Christmas, the Fourth of July, Easter, new babies, pets, grandparents, picnics, and vacations. It’s easy to identify with the kids grinning and squinting into the sun, listening to commands from behind the camera.

Here they troop up a hill in their Sunday best. A boy does a goofy dance, showing off. Here Grandpa, back on the farm in Mexico, rides up on his horse, shakes hands with the ladies, rides off, everyone joking and side-slipping the camera a gaze. Already even the most isolated people know what a movie is, play to the camera. One reel has some unknown and not very skilled person shooting — an attempt to show the family strolling toward the camera ends up cutting off everything but Antonio and Josephine’s heads.

There’s a wealth of archaeological data to be mined here, frame by frame, for the curious scientist. For the casual viewer like you or me, though, there’s a warm familiarity to the proceedings. My grandfather was another camera bug, and there are home movies of our family, doing exactly the same kinds of things, from precisely the same period. It’s nice to know that folks really are the same all over.

For more information on and selections from the Collection, please visit the University of Texas - Corpus Christi site here. The NFR is one writer’s attempt to review all the films listed in the National Film Registry in chronological order. Next time:‘Humoresque.’