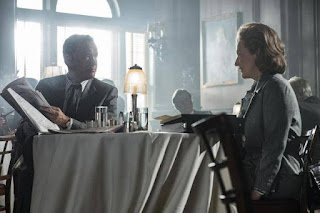 The thing about “The Post,” Spielberg’s new entry in his continuing series of mytho-historical epics, is that it works. What more do you want? Stop there. A work of art is to be judged by how it achieves its ambitions, if it does. With a swelling score by John Williams to point out where you should feel and how you should feel it Spielberg makes the magic happen, in what is undoubtedly the difficult work that comes across as effortless film after film.

He cannot make an unwatchable film, and thus maintains his status as the ultimate auteur of American cinema, but also as the absolute embodiment of old-school Hollywood values, both moral and aesthetic. As Artie Shaw wrote in his autobiography, somebody has to be popular, why not Irving Berlin?

“The Post” is of course the story of the Washington Post’s printing of the Pentagon Papers in 1971. These documents outlined the American government’s campaign of deception regarding the success of the Vietnam War, from Truman’s time down to 1967. (They were, in fact, a study commissioned by Secretary of Defense Robert McNamara.) The battle to find and print the material, and then fight the Nixon Administration over the right to do so, constitute the struggle. Our designated protagonists are Tom Hanks (as Post editor Ben Bradlee) and Meryl Streep as Post publisher Katharine Graham.

Over the past 40 years, it’s been fascinating to watch Spielberg change from Young Turk to Old Master. The understated naturalism that sells “The Post” is as thoroughly predictable as it was in Golden Age bio-epics such as “The Life of Emile Zola” (1935), “The Story of Alexander Graham Bell” (1939), and “Edison, the Man” (1940). In them, the necessary arc of plot is imposed, like a template, over the historical facts, molding them to fit the dramatic needs of the story. This is as it should be, but too often we “print the legend,” as John Ford analyzed so brilliantly in “The Man Who Shot Liberty Valance” (1962). All these films preserve the one-man-can-change-history egalitarianism that’s a foundation of American self-esteem. It’s a myth we needed then and now.

Someone with me described “The Post” as “straight-laced and sappy.” Spielberg embraces not only wholesome American values, he instills them via his now-impeccable old-school technique. We are meant to take what we see as “real,” as veritable if not verifiable. We have to in order to stay with the movie, and Spielberg knows how to create a convincing environment, get us involved with the protagonists, establish the conflict, and move from point to point with absolute clarity. Spielberg has asserted since “Close Encounters of the Third Kind” (1977) the Government is evil, a bad-guy establishment in suits and ties. Now he tells us that the heroes can be “regular folks” in suits and ties, defeating the enemy by manifesting American values. These aren’t movies so much as pep talks.

“The Post” is housed in beats, gestures, and camera moves that obey their own unique logic to produce an effect. There is no mystery. After all, we know what happened. And again and again, in “Lincoln” (2012) and “Bridge of Spies” (2015) and “The Post” and even in “Saving Private Ryan” (1998), we have to rely on melodrama to see us through. They all share the same Golden-Age underpinnings: big, personality actors playing “real people”; a time-driven crisis; history freely rewritten to serve the story. Any casual researcher would soon discover that the facts around the publishing of the Pentagon Papers as presented in “The Post” have been telescoped and rearranged. As a populist, Spielberg knows his audience needs to be satisfied — the buildup, the payoff.

He must give the stars their star turns. My companion also said, perceptively, “And Streep was so . . . Streepy.” The pause, the sigh, the accent, the moments taken for slow, close-up emoting, yes children they were all there. The conscious, politically-correct decision to make Streep’s Graham a kind of secular saint leads to the ludicrous culmination of Streep stepping down the stairs of the Supreme Court, triumphant, flanked by the upturned, and adoring faces of masses of women. Get it? It’s the elbow nudge of doctrinaire filmmaking.

But everybody on screen gets a taste, gets to do at least a beat. In fact, a cottage industry of movie whispering strikes up in Spielberg films, identifying actors – “Oh that’s David Cross! Bob Odenkirk! What a weird role for Bruce Greenwood. Oo, Michael Stuhlbarg’s working a lot.” Nobody can orchestrate an ensemble like Spielberg.

Spielberg’s real gift is his ability to refract the classic Hollywood tradition through his own sensibilities. He is forever a populist, as is his right. Somebody has to occupy the position of paradigm in popular culture, why not him? His first hits reiterate Golden Age values – compare “Raiders of the Lost Ark” to Jerry Hopper’s 1954 “Secret of the Incas” starring Charlton Heston as a proto-Indy; for that matter to run-of-the-mill Mysterious East adventure fare such as “Hong Kong” with Ronald Reagan (1952) and Alan Ladd in “Saigon” (1948).

The thing is, he finds the resonance, space within these classic values and really evokes them and builds out from them — “Saving Private Ryan” being “his” serious WWII film, “The Adventures of Tintin” (2011) being his animated feature, etc., knocking off genres like clay pigeons. He is not transcending them, he is not reinventing them, but he distills them to their essence and reinvigorates them.

He innovates, but he marries it to nostalgia. “Jurassic Park” (1993) was a super-ballsy move. The source novel, Arthur Conan Doyle’s 1912 “The Lost World,” had been tackled at least twice before, under that title – the 1925 version that made stop-motion animator Willis O’Brien (King Kong) famous and a cheesy 1960 micro-epic by the inimitable Irwin Allen. Applying CGI to a problem usually solved via stop motion is simultaneously a quantum leap forward, a sentimental look back, and an extremely marketable concept – the last a talent that’s another source of profit and power, making Spielberg uniquely suited to be completely responsible for the result.

His serious historical films that work -- “Schindler’s List” (1993), “Amistad” (1997), and especially “Munich” (2005), are increasingly corrosive inquisitions of history. However, the tone has changed for his last three American sagas. He has slipped into a sublime naturalism that has a message to affirm about Freedom and Integrity and such, and “Lincoln” (2012), “Bridge of Spies” (2015) and now “The Post” do their job of telling us what our values are helping us congratulate ourselves on recognizing them.

A Spielberg historical film is a secular passion play, an object lesson, a sermon. Whether these values, after being stirred in that religious sanctuary, the communal darkness of the movie theater, will persist in us in the light of day is a conjecture that’s always up for grabs.
Posted by BradWeis at 9:25 AM