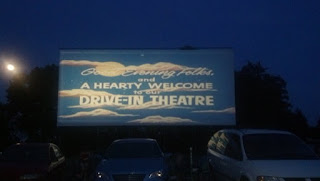 Into the valley of misanthropy, misogyny, and substance abuse we go.

No, I’m not talking about a trip to the Elks’ Club (kidding guys -- Dad was a faithful member. The hour of 11 has a tender significance.)

I’m talking about the drive-in trash we undoubtedly were, the last wave of the target demographic for the boom in films projected outdoors and watched from your car. My latest historical tally of drive-in theaters in the Denver/Boulder area runs to 21 – marvelous names such as the Star Vu, the Kar-Vu, the Star-Lite, and the Motorena, as well as the prosaic Compass Drive-In chain, which consisted of the North, South, East, and West, and others.

The first one to go up was the East, in 1947. The Valley Drive-In came down in 1977, and housing developments began to gobble up the rest. By the time we were parents ourselves, there were few left, and most of them were eyesores that collected wind-blown garbage crucified against the chain-link perimeter fences, and abandoned furniture and clothing in the rear corners of the lots.

Now, outdoor cinema is booming. For the first time in decades, a new drive-in was built and opened, in 2015 – the Denver Mart at I-25 and 58th. Of the original drive-ins, only one survived, the venerable and renovated 88 at 8780 Rosemary in Commerce City. That it did is a tribute to its unwieldy location – in a largely industrial area smack up against the former Rocky Mountain Arsenal. It’s as close as you’re going to get today to the vintage experience.

Our Denver days were marked with drive-ins. The night we moved to town, we stayed in a motel that overlooked the Wadsworth Drive-In – and there, moving with silent authority, was the 40-foot-tall Cinerama puss of Sean Connery as James Bond in You Only Live Twice. This was a mind-blowing experience I deal with more thoroughly here at an earlier Formative Film chapter.

Of course, we went a lot as a family (it was cheaper, even more so if they charged by the carload). You brought your own food (and dad brought his beer, both parents smoking freely, at will, copiously) and you jammed a filthy metal speaker, looking like a refugee from a steampunk/Flash Gordon collision, into the viselike grip of your driver’s-side window against the doorframe of your car.

We put on our jammies and ran around like little maniacs, high on Mountain Dew (no one thought it had caffeine in it) and Sugar Babies, playing on the little playground that, unfortunately for all al fresco cinephiles actually trying to enjoy the film, set right in front of the screen. 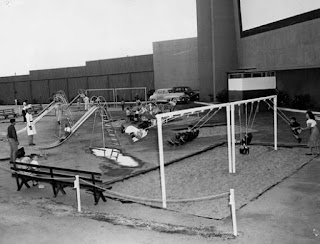 We stuck with the Wadsworth, and included the Nor-West sometimes. After a few years of this, we kids got bored. We dawdled back and forth from the snack bar, and crept into the back of the lot, where it seemed more interesting things were happening. We could smell weird things burning, and hear the clink of bottles, and the windows of some of the cars were steamy and some weren’t and guys yelled at us to get the fuck out of there.

This was for us! When did we get on this action? 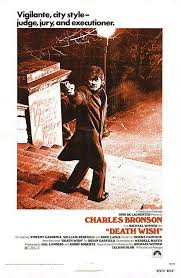 Later than sooner, my friends starting getting their driver’s licenses. At last, we had scroungy little half-jobs and had a little folding money. (Allowances were for rich kids, no one of whom we knew. We thought they looked like Reggie in the Archie comics – tennis racquet, sneer.) We gathered our forces. Once we had accumulated four cars and someone who looked old enough to buy beer, we planned our escape.

We determined to go to the Lake Shore, at 17th and Sheridan across from Sloan’s Lake, for two reasons. One, none of our parents would go there and two, there was a giant tear in the chain-link fence at the dimly-lit southeast corner rear of the lot. Scouting missions consisting of smaller groups had successfully penetrated the perimeter in recent, evaluative forays. It was time to get most of the 27 14-to-16-year-olds in for free. (At other times, did we really use to smuggle people in the trunk to save money? Absolutely.)

They dropped us off in small groups, the advantage of we immediately canceled out by gathering together and creeping noisily along under some streetlights. I’m sure that, if we had looked deep into the minds of those running the theater, we would have found the words COULD CARE LESS. No one jumped us as we contorted through the gash in the mesh.

Trunks full of illicitly purchased beer, the quartet of vehicles made their way into the entertainment area, springs squeaking, headlights bouncing violently up and down. The preferred method of speed control in drive-in lots was to make every path a moto-cross-like pattern of hill and gully. Many a brave muffler was struck off its prime. Finally, the show began.

I had never deliberately sat own and had a beer before. Of course, there were the humiliating public sips proffered by adults, who laughed uproariously when you tried it and made a face. I still made a face. It still tasted awful. Still I worked at it in as manfully a manner as I could muster.

This was really new cinematic territory for us. We were finally breaking into brown-up films. That we started with Death Wish was unfortunate. This is the genre film that started the whole film and TV cycle of grim men with big guns taking the law into their own hands, until we were flooded with wisecracking vigilantes.

The impulse is understandable. The country was in the trough of apathy, distrust, and cynicism. The economy was lousy (remember the New York Daily News headline of October 30, 1975, “FORD TO CITY: DROP DEAD”). The cities were crime- and drug- and poverty-infested shitholes – ironically, the war-zone New York City of my later youth. People felt powerless, especially insecure middle-aged professional white men, oddly the first to feel aggrieved if not emasculated by anything less than smooth control of their environment and others.

Enter Paul Kersey, architect. He’s played in Death Wish by Charles Bronson, who was at the apex of his popularity. He went to Europe to make a name for himself in movies such as Once Upon a Time in the West and Rider on the Rain, and now the French called him the monster sacre – the holy monster. He was cranking out a string of tough-guy actioners, but Kersey is a more troubled soul.

In fact, Brian Garfield’s original novel specifically condemns vigilantism and gun violence. Director Michael Winner took it the opposite way, invoking metaphors from and references to movie Westerns to instill an Old West mentality into Kersey, making him the archetypal good man pushed into violent action after his wife and daughter are assaulted by thugs.

The initial assault is one of the most problematic in film, just as disturbing as Peckinpah’s Straw Dogs three years earlier, and much less thoughtful. Kersey’s wife and daughter, barely sketched as personalities, are ambushed in their Manhattan apartment. The wife is killed and the daughter is graphically sexually assaulted. In fact, pretty much every woman in this film is a victim.

Even at that young age, beer in my lap, it did not feel right. In that scene, the camera is a bystander, a voyeur. The shots are not trying to invoke our compassion, they are not condemning what we see, they are simply recording sexual humiliation, making a sex object out of the character just as much as the thugs are. An anti-crime film is trying to have it both ways, to ogle the forbidden while condemning it. My eyes were drawn to it, and I felt bad. (That one of the thugs is Jeff Goldblum in his film debut doesn’t help any. When viewing today. There are a surprising number of familiar faces here – the always-great Vincent Gardenia, and Christopher Guest, Olympia Dukakis, Paul Dooley, Al Lewis, William Redfield, and Sonia Manzano, Maria of Sesame Street fame. She recommended Herbie Hancock, who wrote a great score for the film)

Of course Bronson is up to the challenge of baiting, hunting, and killing no-goods, all poor, few Caucasian. People are no damn good, rehabilitation is a joke, might as well blow them away. The message here has the simple appeal of brutality – it is swift, unthinking, undiscriminating, easy to implement. It turns live problems into corpses. Death Wish gave gun nuts, open-carry martyrs, and murderers scads of justification and positive reinforcement – Bernie Goetz, anyone? The epidemic of would-be gunslingers, springing up and killing randomly almost every day? It would be much appropriate if Brronson just sodomized every bad guy he came across. As another classic 1974 film, "Zardoz," puts it, "The Gun is good! The penis is evil!"

And of course having a random killer on the streets in Death Wish really helps keep the crime rate down, so the cops love him. When he’s wounded and captured, the police let him leave town. “By sundown?” Bronson ripostes, his flinty eyes glinting even under sedation. The last we see of him, he’s pointing his finger at some punk-ass teens. Our psychopathic hero inspired four sequels.

By the time this film was over, I was busy helping Carl Johnson puke. “It’s OK, Carl Johnson,” I said as I patted his back. “BLUKKKUKGAK,” he replied. On to our second feature! 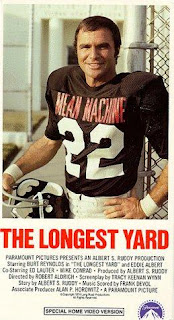 The original version of The Longest Yard was much more upbeat. Burt Reynolds as a washed-up former quarterback leads a wacky bunch of misfit imprisoned underdogs – a kooky mélange of murderers and rapists -- against the prison guards in a game and wins, and Burt learns about himself and grows as a human being and all that stuff.

Unfortunately, he gets to jail by assaulting a woman, which we get to watch. He’s drunk at the time, and she’s a “bitch,” which evidently makes grappling her by the face, throwing her to the ground, and stealing her car an amusing comeuppance. This is not the wit of Cary Grant face-shoving Katherine Hepburn in The Philadelphia Story. It’s ugly.

The only other woman in the film is played by Bernadette Peters. She’s the warden’s secretary who hands over game film of the guards -- in return for sex with Burt of course. Oh, ladies.

While we absorbed all these subliminal moral lessons and the beer, the climactic football game came up. We dashed to the restrooms and stole all the toilet paper. Every time the convicts scored, we launched huge, curling ropes of t.p. at and over the screen, hooting and shouting, flashing our lights, honking our car horns and jumping up and down. Except for Carl Johnson. By now he was fast asleep.

Next time: Rocky Horror and the rage for living
Posted by BradWeis at 9:00 AM