I wrote the (hopefully) definitive list of top screen Sherlock Holmes for Westword a few weeks ago; you can read it here. Upon publication, it was greeted with resounding disinterest. Still, being a typical obsessive Sherlock fan, I compiled another list at the time and thrust it aside. I have far more important things to do than write another wacky list no one seems to want to read.

And the list kept floating to the top of the pile. It called softly, insistently to me. It cried in the wee hours of the morning. So . . . here goes nothing.

Sherlock Holmes is one of the most recognized literary characters in the world, and one of the most malleable. He has found himself amenable to adaptation in stories by other authors than Arthur Conan Doyle, so-called “Sherlockiana.” In them, he shows up in familiar and non-familiar forms. He is gay; he is a woman. He has been portrayed as an addict, an idiot-savant, a murderer himself. He has fought Jack the Ripper, Dracula, and Fu Manchu. He comes from the future; he’s an alien being. The possibilities have been explored.

It seems that Holmes can get on your nerves as well. Conan Doyle bumped him off once, only to resurrect him due to popular demand. Basil Rathbone, the archetypal Golden Age Hollywood Holmes, had fun spoofing the character, as this snippet from anarchic comedy team Olsen & Johnson’s 1943 romp, “Crazy House”:

Nowhere has Holmes been toyed with more than in film and TV. The instant visual association snaps the stereotype of the brilliant intellect into place, and the viewer goes with whatever premise is being proffered. I may not have found the most disturbing variants on Holmes, but it’s not for lack of trying.

Gene Wilder’s directorial debut is shaky, but delivers some laughs. He plays Sigi, the insanely jealous and none-too-bright younger brother of Sherlock. When he gets involved in stopping a plot to destroy the kingdom, complications ensure. Silly fun with a supporting cast that includes Madeline Kahn, Marty Feldman, Leo McKern, Roy Kinnear, and Dom DeLuise, it would be difficult for it not to be hilarious in places. And it contains the funniest and only parody of Verdi’s Un Ballo in Maschera on film. 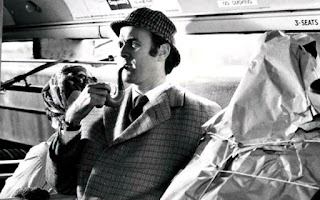 John Cleese, Arthur Sherlock Holmes
The Strange Case of the End of Civilization as We Know It
(Joseph McGrath, 1979)

It’s a dodgy, cheaply made, and intermittently funny modern satire/send-up, chiefly interestingly for watching Cleese work his tormented magic as Holmes. Arthur Lowe is wonderful as the densest Watson in history, and Connie Booth plays Mrs. Hudson. When it does make sense, it’s terribly black sense. 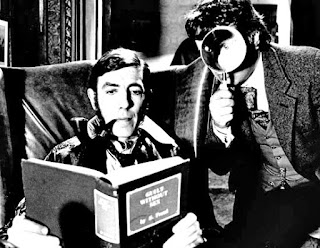 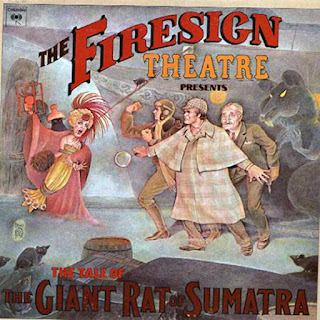 Not as well-regarded as their first four albums were, this Firesign Theatre romp is just as dense with mayhem and cultural references as a typical Nick Danger outing. It’s another parable about the evils of the modern state, writ large in genre. As always with Firesign, listen with headphones – the sound engineering is impeccable. 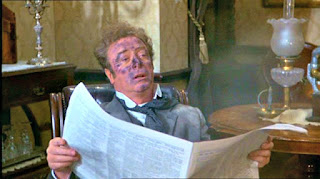 Here’s the pitch, boss – we make a Sherlock Holmes movie, but Holmes is a dumbass! Whaddaya think? Ben Kingsley is the brilliant Dr. Watson, whom no one believes is brilliant due to his Holmes construct, played by actor Kincaid (Caine).

Scott is a judge driven to madness by the death of his wife. He believes he is Sherlock Holmes, and his brother sends a psychiatrist to certify him insane. Unfortunately, that doctor is Dr. Watson (Joanne Woodward), and Holmes makes sense. It’s a beautiful little film about the dream of a world in which crimes are solved and justice is done.

The android Lieutenant Commander Data was fond of the detective, and sometimes played him in recreational holodeck situations, the subject of a few episodes in the series. 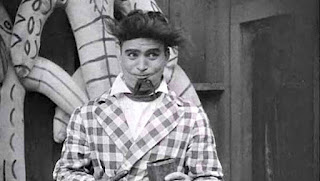 A “hallucinogenic odyssey into the absurd.” Fairbanks is a parody of Holmes only in that he wears checks and shoots up lots and lots of cocaine (the film was made a year before opium and cocaine was made illegal in the U.S.). It’s a weird short subject, a trick film in the manner of the more popular When the Clouds Roll By in 1919. 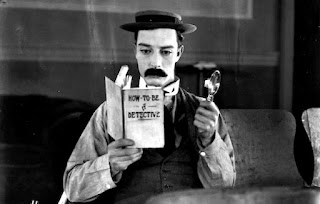 One’s of Keaton’s best, the only reference to Holmes is glancing, but it motivates the entire plot. This is the film with the legendary sequence of Keaton stepping into the film and being flung from scene to scene, an inspiration for Chuck Jones, Woody Allen, and others. 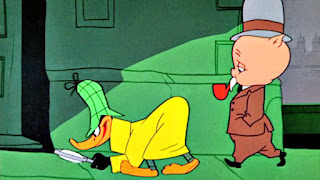 It’s the wacky waterfowl as Holmes, with Porky as Watkins, versus the, as Daffy would put it, “Thropshire Thlasher”. It goes about as well for Daffy as you might expect.