Light in the corners: ‘Unseen Cinema’ and ‘Homemovies’

A dizzying, 7-disc, 19-hour compilation of experiments, ephemera, visions, and follies on film. An hour of TV a week from a converted Quonset hut that played people’s home movies.

What do these two things have in common? They champion the Weirdness.

If you’re not familiar with film writer Manny Farber’s famous essay in Film Culture in 1962, he raises the idea of “White Elephant Art” versus “Termite Art” – specifically, bloated and pretentious mainstream film versus the B-film, the genre piece, the low-budget quickie. Farber felt the latter was inherently transgressive -- a more efficient, aware, and effective kind of art that’s vastly more in touch with the spirit of the times.

The essay changed how we think about film, and spawned a generation of critics and writers who found new depths and dimensions to both “low culture” and works way off the beaten track of consensus-driven artistic success. Armed with this new analytical tool, all those obscure delights, guilty pleasures, and splendid misfires became worthy of examination. The boundaries between high and popular culture dissolved as Sontag, Kael, and others spread their nets. 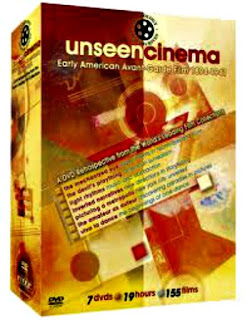 Bruce Posner’s research and selection on “Unseen Cinema” goes to further lengths than any I’ve seen. He reaches back to the film industry’s crude beginnings, ending his survey around the time of America’s entry into World War II. He ferrets out everything from the initials use of in-camera effects to archival dance recordings to funny newsreels, socialist and capitalist propaganda film, a healthy dose of self-indulgent, self-consciously avant-garde work, and some stunning animations.

Disc 1: The Mechanized Eye: Experiments in Technique and Form

The first panoramic and tracking shots are here, and the negative-image superimposition of the eerie short “Ghost Train.” There’s the strangeness of 1936’s sing-a-long “Melody on Parade,” and the non-narrative montage of “Poem 8” (1932-1933). “In Youth Beside the Lonely Sea” (1924-1925) is a beautiful and innovative three-panel poetic work that predates Abel Gance’s famous use of a triple screen in “Napoleon” (1927). Amazingly, its creators are unknown.

Here are the absurdities of trick photography, as in Billy Bitzer’s “Impossible Convicts” (!905) and Edwin Porter’s Dream of a Rarebit Fiend  (1906). Dream sequences by Victor Fleming (“When the Clouds Roll By,” 1919) James Cruze (“Beggar on Horseback,” 1925) segue into Cubist masterpieces such as the 1926 “Fall of the House of Usher” and Robert Florey’s famous “Life and Death of 9413: A Hollywood Extra,” and the film fantasies of Joseph Cornell.

Here are some of the touchstones of avant-garde cinema – Man Ray’s “Retour a la Raison,” Leger and Murphy’s “Ballet Mecanique,” and Duchamp’s “Anemic Cinema,” Steiner’s “H2O” and “Seaweed” are essays on the art of seeing. A kinetic party scene from Lubitsch’s “So This is Paris” (1926) is here, as is Busby Berkeley’s geometric “By a Waterfall” sequence from “Footlight Parade” (1933).

The big reveal here is the work of animator Mary Ellen Bute, who created astonishing abstract work with Ted Nemeth such as “Rhythm in Light” (1934), “Synchromy No. 2” (1936), and “Parabola” (1937), all here. These works, synchronized to classic music, are proclaimed to be “moods for the eye.” Their techniques were shamelessly ripped off by Disney for use in “Fantasia.”

From Lois Weber’s innovative “Suspense” (1913), through the agitprop of “Black Dawn” (1933), and the sheer randomness of Christopher Young’s perplexing “Object Lesson” (1941). Oh, and as early as 1937, there’s already a parody of the pretensions of the avant-garde – Barlow, Hay and Robbins’ “Even: As You and I.”

Straight performance captures alternate with more interesting fare such as Stella Simon’s “Hands” (1928) and a rare film of Tilly Losch (“Dance of the Hands,” 1930). Some of the unused footage from Eisenstein’s unfinished “Que Viva Mexico,” silent, haunting, and powerful.

Here is more animation as well, including Gross & Hoppin’s insanely beautiful “Joie de Vivre,” and Oskar Fichinger’s “An Optical Poem” for MGM in 1938 (evidently, some of these avant-garde pieces crept into general view as shorts in distribution packages by the major studios). Norman McLaren’s idiosyncratic work is scratched directly onto the film, decades before Brakhage. (His collaboration with Bute and Nemeth, “Tarantella” and “Spook Sport,” are here as well.) The final disc closes with David Bradley’s experimental epic “Peer Gynt,” starring Charlton Heston in his first film role.

Seemingly at the other end of the scale is “Homemovies.” 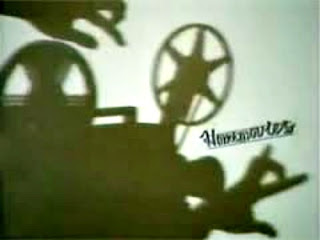 From 1981 through 1992, it played, by and large live, direct from the public TV station KBDI in Broomfield, Colorado. It was the crazy brainchild of hosts Bill Hammel and Nick Fraser, who combined amateur filmmakers’ submissions, comedy sketches live and taped, interviews, musical guests, and miscellaneous ridiculousness.

What is now the far classier and better-funded Colorado Public Television was then housed out in the boonies, in a dingy industrial park. Our live studio was the parking bay of the station; we would roll the garage door up on nice nights, or when a guest wanted to drive onto the set.

Here’s the kind of station it was -- they measured the transmitter temperature with a meat thermometer. The station once on-air-auctioned one of the Residents’ donated eyeball heads during a pledge drive, and did quite well. The signed Lionel Ritchie photo, not so much.(The early music video program “FM-TV”/”Teletunes” was incredibly, transgressively awesome; its VJs contemptuously elbowed us out of the way as they set up for their broadcast after ours.)

The only rules for film submissions were: no cursing, no sex – nothing that would get us kicked off the air . . . as though we were on any official anyone’s radar. They played miniature action movies, inept stop-action animation, bad slapstick comedies, anguished teen meditations, sci-fi, horror, an endless stream of martial arts sagas. Student filmmakers mailed in class assignments. Once in a while, they played real actual home movies, the filmmaker narrating live in voiceover from the show’s signature faux-leopard-skin-draped couch.

We invented the faux music festival Broomstock as a theme show, years before it happened for real in Broomfield. (Life imitates comedy.) And who can forget the annual glory of the Homie Awards-- a fabulous event featuring Barbie dolls spray-painted gold and stuck to film reels as prizes?

“Homemovies” was nothing if not a haven for termite art. For a few years, I was one of the gang – writing bits, taping them, doing whatever needed to be done on camera and off. The budget was whatever cash we had in our pockets. We made our own props, gathered thrift-store costumes. You would find something in a dumpster while driving down an alley, stick it in your car, hose it off, and write a sketch round it.

I was in my 20’s, just starting out in comedy, and “Homemovies” was part playground, part laboratory. Nobody knew what we couldn’t do, giving us perfect freedom to break all the rules. We were a favorite of stoners and other freaks within range of our signal, and I loved saying goodnight to my oldest child, who waited up to see me on TV once a week.

Bill could give you a lot more details. A good archivist, he posted many bits and skits from the show here -- https://www.youtube.com/user/Homemoviescolorado. My stuff is embarrassing to watch now. It would have to improve by several orders of magnitude to be considered sophomoric. But, I have embraced that pain. Sometimes, you need to explore a path and find out that you’re no damn good at it so you can move on. I was no good at television.

Did “Homemovies” show any deathless classics, or showcase the early work of future geniuses? I have no idea. The show winked out of existence just as the Digital Age dawned, and the station outgrew its ragtag origins. We had fun. We laughed a lot. If that is the only benefit “Homemovies” conferred upon the world, for us and the freaky faithful, it was all worth it. It was uncut Weirdness, straight to the vein.

In future, regional boundaries would be erased, films could be made anywhere by anyone with ease, and shared instantly. In analog days, “Homemovies” was a vital, non-judgmental (OK, really judgmental) outlet for creative talent in a world where no one had easy access to the cinema’s means of production. They were pipelining public access to the airwaves, subversives and clowns on the margin, at the bitter end of your broadcast TV dial.

And who knows? Like the films in the “Unseen Cinema” collection, perhaps “Homemovies” selections will live to see another day, lit up again and revalued.

In fact, the 19 hours of “Unseen Cinema” footage I waded through had some rough patches. Does collecting these random pieces legitimize them? Are they valuable only when they are commodified? No, but we need that access to make up our own minds. An aesthetic canon can be just as deadening as any other dogma, a kind of White Elephant avant-garde that risks and accomplishes nothing. (If you think it’s bullshit, guess what? It probably is. Trust your instincts.)

You need a varied cultural diet – Oscar bait and mindless summer action, foreign quandaries, silent gems, patience-testing experimentation, and the unclassifiable detritus of the margins. It’s good for you. It makes you tolerant and accepting, all the different levels thriving and combining freely in your mind. “Homemovies” helped build the appreciation muscles I needed to grasp “Unseen Cinema.”

Victor Hugo wrote, “Success is an ugly thing. Men are deceived by its false resemblances to merit.” Contemporary success has much to do with tuning one’s work to the current cultural norms. The mainstream will flow, drought or flood.

“Unseen Cinema” and “Homemovies” provide, and provided, examples outside that norm necessary to stimulate hope and a sense of possibility in creative minds.They are and were conduits, reservoirs, radiant points, resonant spaces.They demystify the process, teach us that anyone can do this, should try this art. The hits and the classics inspire us but what sustains us is the little TV show, the odd obsessive compilation, the entry-level backstage gig, the local radio show, the open-mike night, the fringe publication,

We ought not to be just about the White Elephant, well-lit, in the center of the room. Look, there is art, too, there, in the cracks. There is light in the corners.


Addendum: Happy Ending! Bill just informed me that there was one precocious 13-year-old who showed some stop-motion animation on the "Homemovies" show. That kid, ladies and gentlemen, was Matt Stone of "South Park" fame. As Stan Lee might put it, KRAKKADOOM! If only we had put some money on the kid.
Posted by BradWeis at 10:00 AM