An autobiography in movies
By BRAD WEISMANN

O who doesn’t want to crank it up a notch or five? Who wouldn’t want to strap in to a boss machine, feel the blissful hiss of the road under your wheels as you bomb, balls to the wall, top-speed from one end of this jacked-up country to the other? Blowing the forces of authority off the road, for no good reason save that takes a hero to be a soulful outlaw? Or something?

This is the basic appeal of the original 1971 feature film Vanishing Point. Part car-chase movie, part Romantic melodrama, part pretentious mystical saga, it’s a ridiculous and transgressive (at least for 10-year-old suburbanites like me) cult masterpiece that shattered so many taboos that it’s still an active reagent of my imagination. Bobby Gillespie of the band Primal Scream, which recorded an “alternate soundtrack” tribute album to the film, said of it, “We love the air of paranoia and speed-freak righteousness.” It’s all that, plus an Existentialism 101 course, as well as a foreshadowing of the cynicism that was creeping up on America in the ‘70s. And, oh yeah, there’s this completely naked young lady on a motorcycle.

It all starts in Denver on a Friday night. A car delivery driver named Kowalski (Barry Newman) pulls into a garage. Please note, Kowalski is his name. His only name. Much is made of this throughout the film. Yes, he's Everyman. He’s terse, focused. He gobbles some White Crosses. He grabs another car that needs to go to San Francisco – a white 1970 Dodge Challenger R/T 440 Magnum, with the pistol grip gear shift and everything!

Kowalski is addicted to speed, chemically and kinetically. He makes a whimsical bet with his drug dealer that he will make the run non-stop, in a time span that guarantees that he’ll have to ignore the law to get there. Got it? Enigmatic, haunted speed freak careens defiantly across the American Southwest, trashing the Man’s puny efforts to stop him with only brief breaks for expositional flashbacks and encounters with various symbolic weirdos.

The film obviously comes from somewhere. Everyone was making road movies after the success of Bonnie and Clyde and Easy Rider. Road films of the same period such as Rafelson’s Five Easy Pieces and Hellman’s Two-Lane Blacktop were also hip-deep in metaphors.

Vanishing Point’s lead, played by the solid Barry Newman, also adopts the patented macho stoicism of Robert Mitchum in 1958’s Thunder Road (with precedents from James Dean in Rebel Without a Cause (1955) and Brando in The Wild One (1953)). This tough-guy aesthetic would pass through the hot-rod and biker movie subgenres, and on into films such as the original Gone in 60 Seconds, Eat My Dust, Grand Theft Auto, and Dirty Mary Crazy Larry – hymns to speed and stunts that descended into barbaric redneck yawps against authority.

Kowalski’s journey is so freighted with meaning that it’s a wonder the car can get up to speed sometimes. There is no reason why Kowalski has to get to San Francisco so fast. He CHOOSES to do it, that’s all – a perfect existential hero. Kowalski makes Ryan Gosling’s Driver look like a vapid chatterbox, and Ryan O’Neal’s Driver look like a tetchy old granny.

In flashback, we are informed that Kowalski is a) actually the “last American hero,” b. A Medal of Honor winner, c.an honest cop who got fired for standing up for what was right, d. and e. a car and motorcycle racer, and strangely f. a man whose girlfriend informs him she thinks she’s going to die, then goes right out into the ocean and does so (in classic, cheesy cinematic shorthand, the surfboard washes up on shore without her). He has had it with society and life.

Kowalski IS America, man. Don’t you get it? No wonder he’s wacked out of his mind on trucker crank. Wouldn’t you be? He’s got nothing else going on. He has nothing but his existential freedom left. The enemy is everywhere, it’s society itself. America has let its hero down, and his heroics have shrunk, from its perspective, into the shape of meaningless lawbreaking. 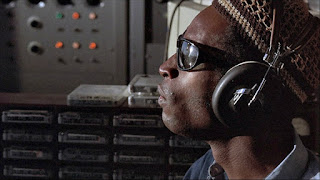 In this film, the role of God, or at least blind Tiresian seer, goes to Cleavon Little in his first featured role in film. His Super Soul, a DJ at tiny radio station KOW, monitors the police band and passes information and advice to the hero over the air. He serves as guide, celebrant, conscience, and narrator of the back-road odyssey. Little is great in the role, by turns ecstatic and thoughtful. Super Soul (get it?), the person most hooked into Kowalski’s mind, is at the farthest remove from him.

Also, for the first time, I saw my own city in a movie, itself a staggering experience. Reality and film intersected. Here was a shot of the old Gardner Tools building, down by the Platte, where Kowalski starts out. There he is, going over the old 16th Street viaduct! (I recognize the odd cross-hatched metal railings.)

Oh my God, there he is on I-70! The first big car chase sequence in the film takes place between Rifle and Glenwood Springs, giving the viewer an excellent reminder of what the two-lane road was like through Glenwood Canyon before the massive interstate engineering project was completed decades later. There was a thrill to seeing cars zoom, crash, and squeal along the route you and your family only plodded through weeks before. The idea that amazing things could be conjured up in the midst of the ordinary was a revelation.

Jesus Lord, even veteran Denver newscaster Bob Palmer is in this film! 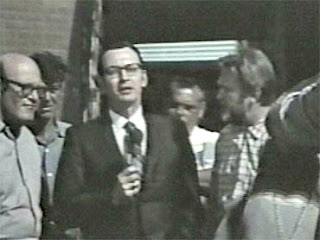 (Loved him. He used to come over to the Denver Press Club, go in the basement, take his toop off, stick it on a lampshade, and play pool. Those were the days!)

In fact, this film has an incredibly high percentage of obscure but important musicians and actors in the cast. Delaney & Bonnie are in a revival-meeting band, as is Rita Coolidge and Ted Neeley. Kim Carnes can be heard on the soundtrack, her first recording, and hey! Who’s that little bearded guy playing piano? It’s David Gates! Small world.

Acting vets Karl Swenson and Dean Jagger are here, as well as a quick scene with Severn Darden, a brilliant Second City improviser and comic actor who did far too little on screen. Blink and you’ll miss character actor stalwarts such as Timothy Scott, Anthony James, Arthur Malet, John Amos, and Val Avery.

Of course the real star of the film is the car, the embodiment of Kowalski's urge to move, his weapon, his symbolic what-have-you. There’s a lot more to indicating speed and travel than just shooting fast cars driving by, and cinematographer Alonzo does a great job here. The stunts and chase sequences are inventive, but not spectacular in and of themselves. He repeatedly shoots the car straining towards the vanishing point (obviously), but he also bolts the camera to the car instead of using a tow rig, and the resulting shots he gets have some vibration to them – they are felt more strongly. Sometimes Alonzo just pans lovingly up the length of the car in motion, setting in on Kowalski’s silent face.

Then there’s the desert. Vanishing Point whips across the wasteland. The “cold desert” of the Great Basin of Utah and Nevada is rarely celebrated in American culture, but that beautiful open space, denuded and spare, under an enormous sky, geometric and elemental, is one of my favorite in the world. The immense distances, the romance of the unlimited horizon, are addictive. In later years, I would zigzag across the country doing comedy, a would-be Kowalski road warrior in a Honda full of fast-food trash, cigarette butts, and empty coffee cups.

And what about the naked lady? I’m not sure who thought it would be a good idea to include a nude motorcycle-riding young woman in the film – it’s not anything on which the plot hinges. 24-year-old Gilda Texter plays the enigmatic “Nude Rider” with a devastating sang froid. (Ironically, she left acting but stayed in the film business as a costumer.) She rides up, she’s naked, it’s no big deal, she talks to Our Hero, and that’s it. 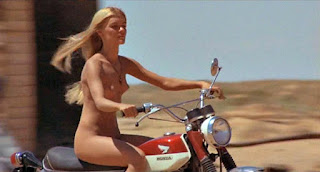 At the time, though, we appreciated the gesture. This gratuitous scene was the first time I or my friends had seen a naked lady. (I had a glimpse of a lightly clad Faye Dunaway in a trailer for Bonnie and Clyde, which piqued my interest.) The first time we saw the movie, our little brains went TILT when this scene came on, and stayed that way until the end. Needless to say, this was a rich source of discussion and analysis among us, one which required repeated trips to the movie house to make surer of what we saw. We were all raging nascent heterosexuals whose latency periods had just ended. Vanishing Point kick-started our sexual curiosity.

However, Kowalski's joy ride couldn’t last forever. In keeping with the sense of defiant nihilism that was rapidly taking over the country’s mood after the bust of hippie hopefulness (remember, Altamont took place only four months after Woodstock), Vanishing Point gives up the tragic finish.

Here, the State of California as manifested through its Highway Patrol Department is the embodiment of evil. It is efficient, well-funded, geared up, uniformly uniformed, and schematized to a fault to neutralize all threats to the State. Kowalski’s path is now tracked by a wall-sized, flashing early electronic map, with bells and whistles that make it sound like nothing else but a pinball machine. The rebel has been reduced to data, a moving target.

SPOILER: Kowalski is doomed, and it comes in the form of two bulldozers, their blades angled into each other, blocking the highway. Switching off his car radio and the voice of Super Soul, oblivious to alternatives, smiling wanly as he accelerates, he rams into the roadblock and his car explodes, killing him. An American crowd typical of the kind that enjoys checking out car wrecks and house fires stands by and watches. (During the end credits, a man pulls a clump of something out of the burning wreckage – in the days before rewind, we watched again and again, arguing as to whether this was Kowalski’s head or not.)

His death was a shock on first viewing (for those of us not still thinking about the naked lady). It makes a great deal more sense in the UK version I never saw until last week, seven minutes longer with a scene right before the end involving Charlotte Rampling as a mysterious hitchhiker who is obviously Death herself. 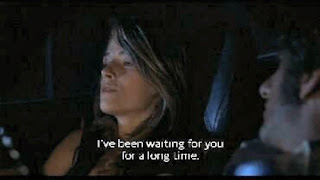 Without that costal-cracking nudge to the ribs, to us at the time it seemed random – less so than the twin killings that randomly end of Easy Rider, but random still.

We invested all our emotional energy in identifying with this hero, and he takes the seemingly unnecessary, easy way out. What the hell? We had not encountered this level of cynicism before. Vanishing Point was saying the hell with the whole rotten thing, a hipster march to Calvary.

After the second or third screening, though, we bought it. The timing was perfect. We were moving into our disaffected teen years, and the country was distrustful and complacent, burned out from years of turmoil. The ‘70s were here. Kowalski had to die. He was a martyr to the Man.

We left the theater bummed out, but determined not to let the Man get us. American twilight was here, and we were screwed. Now we needed our cynicism to make us brave and defiant enough to keep going. We didn’t know it yet, but there was help. Burroughs was out there, and Captain Beefheart. Lou Reed was on his way, and Iggy Pop, and Jodorowsky, and Herzog and Fassbinder – the artists that were going to tell us our truths. In a strange way, Vanishing Point was the birthpoint of some dark hope in me. 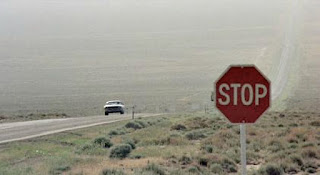