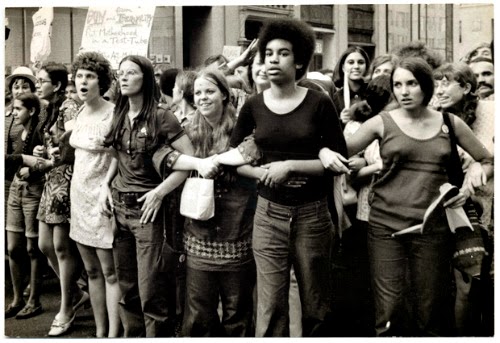 It’s great to see a dynamite film history on the topic of women’s liberation, not least because . . . well, how come someone hasn’t done this before?

Director Mary Dore sculpts a narrative that seems concise and expansive at the same time, a documentary that breathes. It helps that it is populated by many of the prime movers of the Second Wave of the movement: Brown and Millet, Ceballos and Brownmiller, and more, who rehash the culture war they waged against sexual discrimination.

The period covered, from roughly the publishing of Friedan’s “The Feminine Mystique” in 1963 through Roe v. Wade in 1973, is richly documented in contemporary media as well, and Dore adds powerful segments from the front lines – some of the faces from which contrast vividly with their present-day selves, creating an illuminating counterpoint. The founding editors of “Our Bodies, Ourselves,” then and now, resemble nothing so much as a bunch of genial, witty, and genteel revolutionaries.

Archive footage brings back vivid memories of the modest, aproned housewife archetype, her suffocating lack of choice and independence and resources driving her nuts. Society was programmed to mimic the Space Age nuclear family, whether it had resonance or not. (Ellen Willis’s daughter Nona notes perceptively that sexual prejudice today is more subtle and pervasive, more difficult to name and battle. This mirrors the kind of struggle African Americans faced in the North during the Civil Rights movement, where prejudice was more covert.)

The constellation of challenges facing women in America: perpetual lack of basic health and child-care services, the condescension, the sheer ever-present physical danger, the return of female objectification, the marginalization of gay and African American women, and a hundred other vital ideas are spilled out here in an adroit mix of testimony, quotation, vintage film, and reenactment. What makes “She’s Beautiful” work is the unbuttoned, free-swinging truthfulness that all the film’s protagonists possess so serenely. Disputes, desertions, factions, ideological wars, are all on the table here, which gives the history a texture of complexity, a dynamic that demonstrates that it’s all still playing out, in process.

The screening I attended was enlivened by the appearance of activist, author, educator, and editor Marilyn Webb. Webb, who featured prominently in the film, was a co-founder of the SDS, pioneered in the women’s studies movement, and published the first feminist newspaper. Her notorious booing by male members of the peace movement in Berkeley signaled the fact that chauvinism didn’t adhere to political leaning. “And it was my debut speech!” she recalled.

Webb reinforced the idea that it is vital and valid for individual action to every level of society in order to transform it. While emphasizing the gains made in the ‘60s and ‘70s, she reiterated warnings about fighting “backsliding” – the erosion of rights that continues across the country.