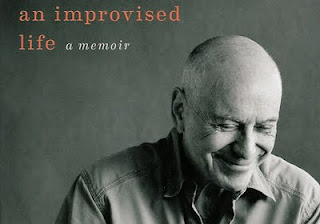 This is not a critical review. This is not analysis. It’s excessive gushing followed by extensive quoting. Hope that works for you.

When I found out he got started, along with many of my other performing heroes, in improv, I was determined to do the same. I spent 15 years on stage making things up, and loved it. Except for that time I got a concussion. Or the time I ate the cigarettes. Or when I challenged 150 people to a fistfight. Those are other stories for other days.

So, when I saw his memoir on the shelf, I grabbed it. I can happily say that it’s one of the most readable reminiscences I’ve encountered in a long time – especially because it’s not really that. I’ll explain.

Most autobios retail anecdotes – I did this, then I did that, I slept with her, him, them, I got this award, that honor, I was great. Arkin serves his readers by focusing specifically on the art of improvisation and its transformative power. Reading “An Improvised Life” is a rewarding experience for those who know the craft, those who are curious, and those who became, like me, burned out and dead-ended in the discipline. Arkin’s book will remind the latter why this calling is so intoxicating, fruitful and worth the struggle.

Arkin wisely provides us with just enough of his life story to set the stage for his thoughts on performance. Indeed, watching the writer get out of his own way is in itself a treat. His professional ups and downs, marriages, and relationships with his offspring are subordinate to his discussion of the use of the form to promote self-understanding and growth. He is more interested in being a genuinely good person than a star.

He sees performance as a revelatory (but not self-indulgent) process, instead of as an act of commodification. He writes:

“We live in a culture where everything is selling. I watch TV and I don’t see events, I see people selling me events. The newscasters are not reporting the news, they are dramatizing it, selling it, selling themselves as good reporters. They’re making the news “interesting” . . . actors are selling products they have no feeling for; the political forums are all jazzed up and contain endless faked fights . . . We’re so imbued with the onslaught of selling, selling ,selling – products and personalities – so bombarded with hype and false excitement that I think we forget what a real experience feels like . . . we begin to believe that since we are expected to have an experience that we are actually having one.”

I’ve often referred to this as “the Broadway experience.” If you shell out big bucks for a concert, play, movie or activity, it’s very difficult to admit disappointment or even dislike. Along with the rest of the audience, you are on your feet at the end, applauding. Why? Well, because you feel like a dupe if you don’t. Early in my career as a critic, I was often unduly harsh in reaction to the complacency I perceived. (Needless to say, my snarky comments didn’t bring the revolution.)

Arkin, like me, is a big fan of Shunryu Suzuki’s “Zen Mind, Beginner’s Mind,” and advocates throwing away stale behaviors and perceptions onstage and off, getting fresh eyes. The second half of Arkin’s book deals almost exclusively with his work directing improvisational seminars, and it’s his demand that people stop looking for the punch line, to STOP ACTING, that I find so exciting.

The roots of improvisation are spontaneously play; when harnessed to the exigencies of appearing on a comedy stage, they turn into predictable setups. The standup comic traditionally likes to get a laugh in his or her routine with a frequency of between 15 and 20 seconds. That need caused me and others, countless times, to cut to the gag in an improvised instead of trying a more difficult, less payoff-certain path. Eventually, improv games became routinized, from development to payoff to blackout line. I was bored out of my skull, but didn’t have the wit or ability to push against the compulsion.

Arkin reduces the onstage impulse to intention and the emotional context stemming from same. He reframes the motivating spring between people onstage from “conflict” to “objective,” sidestepping the often fatal flaw of creating opposition in a scene gratuitously. He sees his function in leading a workshop as, one, providing support and a lack of judgment and two, “to help people get out of their heads. Their clever place.” He describes the results as “deeper, more spontaneous and more connected.” I believe it.

Making room for honest feeling and reaction allows players to invest the work with meaning. They don’t have to “buy into” anything, because they are being real, even in a willfully imagined context.

Arkin’s later workshops seem to involve people from all walks of life, not dedicated performers. As someone who has done many of these seminars, and who always felt guilty about taking money for them, I wondered frequently if people really got anything out of the experience, took something home with them that they could use in their “real” lives.

Arkin provides an answer: “If something is to come out of the experience it will come out of devotion to what is taking place right now. I believe this fervently, both in life and in a workshop: that if this present moment is lived whole-heartedly and meticulously, the future will take care of itself.”

That’s quite a punch to the gut, especially for someone as approval- and accomplishment-oriented as I still am. What? I don’t have to prove anything? I can just be? How does that work?

“In the final analysis, it’s all improvisation,” Arkin concludes. “We’re all tap dancing on a rubber raft. We like to think otherwise, so we plan our lives, we plot, we figure, we find careers that will guarantee us early retirement, we look for relationships that are permanent, we fill out forms, we do scientific experiments, we write rules – all in an attempt to solidify, concretize and control this universe of ours that refuses to be pigeon-holed, to be understood, pinned down, categorize, or even named . . . It’s all the nagging, the complaining, the plotting, the fears, the endless need to keep the universe in all its majestic chaos at bay – that with a little more thought and effort we can figure it all out, control it all, the universe, our destiny. This is what kills us, robs us of our spontaneity, our ability to improvise . . . “

Inspiring is an overused term, but appropriate in this case. For those who want to reach a place of authenticity and immediacy, the outline is right here. “An Improvised Life” asserts that there is a significant spiritual dimension to life, and that process trumps both end and means. It redeems much for me. Thanks, Mr. Arkin. Thank you very much!
Posted by BradWeis at 1:50 PM