Why should you go to the Boulder Outdoor Cinema? 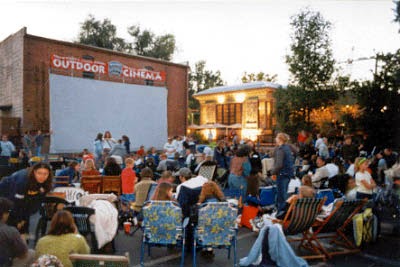 How about actually having some fun for a change? OK, try this:

For five bucks, you can sit under the stars, in your own chair sofa or bed, hanging with a bunch of like-minded folks, chomping on your own snacks or fare from food trucks or stuff from the collapsible snack bar, hear good music, win a prize in a trivia contest, and see a movie projected on the side of a balloon.

Jeanine Fritz and Liz Marsh would like you to stop by. They own the Boulder Outdoor Cinema (BOC), still going strong and providing lots of good times for viewers of all ages (depending on which films you go to – “Princess Bride,” family fare. “American Hustle,” not so much). Now in its 20th season, it sports a new screen is becoming a nexus for socializing and creative weirdness in Boulder. Good! (I won’t lie, they’re my friends, I’ve emceed shows there, and I want you to go.)

The Saturday shows start at 7:30 p.m. with an hour of music from a local band, followed by the movie at dusk in the parking lot behind the Boulder Museum of Contemporary Art, 1750 13th St. Three weeks of the eight-week schedule remain, including “Princess Bride” on Aug. 18, “American Hustle” on Aug. 23, and “Monty Python and the Holy Grail” on Aug. 30.

BOC’s new inflatable, portable screen is already allowing the company to stage shows at other venues – including a special screening of “Back to the Future” at dusk on Friday, Aug. 17 at the Valmont Bike Park, between Airport Rd. and 55th St. on Valmont (sponsored by Gebhardt BMW – now, go buy a car from them).

I got Jeanine on the phone and interrogated her. It took some time – both the owners work full-time, and nailing down even a little phone time with one of them was arduous. However, it was worth it, ‘cause she cracks me up.

“The goal of getting the new screen was threefold,” she said. “One: to make it look nicer – the old screen was 20 years old! Second, we get a better, brighter image. Third, we are finally mobile – we can do private gigs! We’re protecting the future of the Outdoor Cinema.”

According to Jeanine, “The new screen folds up like a big Chipotle burrito (writer’s note: not a deliberate plug, but maybe they’ll notice!), about the size of a Nissan Leaf (writer’s note: ditto). It’s kinda heavy.”

The ability to respond and adapt is keeping BOC going. Last winter, a series of screenings indoors at the Bohemian Biergarten did well, and Liz and Jeanine emblemize qualities that keep the shows fun and interesting – they are transparent, inclusive, and interactive. Check out their website here; you can always follow them on Facebook and Twitter, email them at info@boulderoutdoorcinema.com, or call them at 1-855-BOC-YEAH! (1-855-262-9324).

In fact, BOC is one of the few arts organizations that makes it choices based directly on audience input. “We listen to people all year long. They are always saying, ‘Oh, you should show this,’ and we write it all down. We add our own, and we eventually end up with a master list of about 200 titles. We knock out the ones nobody’s ever heard of (writer’s note: this explains why they have never shown “Shadows of Forgotten Ancestors” or “Why Has Bodhi-Dharma Left for the East?”, or a Fassbinder marathon, DARN IT). Then we contact the licensing companies, and by this time the list has been knocked down to about 80.

“Then we sit down and think – which ones are going to bring the biggest crowds? BUT – we also like to mix it up. Let’s face it, nobody out side of us is going to come for eight weeks in a row. We like to mix the flavors and the genres, kids’ and adult stuff.”

Some movies do make their way on to the BOC schedule year in and year out. Fan favorites to date: “Holy Grail” and “Princess Bride” are neck and neck right now, Jeanine said. She did book a quirky little independent film that had just been released one year, and nearly 1,000 people flocked to see “Napoleon Dynamite.”

My stupidest question was the most nagging, so I asked it first. What time do the movies start? When is “dusk,” actually?

“8:32,” Jeanine responded. “8:28. Or . . . somewhere in there.” This debate has been going on for years. Dave Riepe, long-time cinematic fixture in the area and still running his Space Farmer Productions, started BOC in 1995; Jeanine started working there four years later. By 2004, she was managing it; she took over in 2010. Liz came on board the next year (the two of them met in film school) and everything’s gone perfectly ever since. Except for the rain. More on that later.

“We tried starting the film at exactly 8:30, but you’ve really got to finesse it so that the image is good, so we just improvise,” she stated with an ineffable, mysterious tone that reminded me of a Tibetan lama, or someone with the sang froid of an expert guesstimator. The BOC ladies have wisely created a pre-show with music from local bands such as Jeff Brinkman, El Bando, and Chimney Choir, along with a rousingly silly trivia contest with prizes from various sponsors.

Of course, the crowd is what makes the show. Fortunately, hardy Boulderites like doing stuff in the outdoors, and BOC appeals to the idiosyncratic elements in town. Viewers are encouraged to bring their own chairs, and couches have made it to the show – and even, last week, a bed, which became the emcee’s podium before the show.

Audience members have always been able to bring their own snacks. Beginning last year, food trucks have started to work the event, so that now from week to week there are options such Cheese Louise, a gourmet grilled-cheese sandwich emporium on wheels, as well as Verde, Boulder Bike Blenders, Bon Appetite, and Suburban Wiener. More traditional fare – popcorn, candy, etc., -- is available from BOC’s own concession stand.

Fan safety and security is provided for. The only real drawback to a night at the BOC is the occasional downpour, although I have been at screenings that went bravely on despite some precipitation. Patrons are encouraging to bring blankets, jackets, and rain gear – and Jeanine has gone through wet crowds before, handing out nifty garbage-bag ponchos.

All this for only a $5 suggested donation. NOW: just because it’s a suggested donation doesn’t mean you shouldn’t pay it. Or pay a buck. Or a penny. You cheapskate. BOC is NOT subsidized by the city, or any kind of arts funding. This is how they stay alive. So you should pay at least $10 each. Or more.

A new addition to the fun is a wacky startup that sounds very interesting. Davey P. Gravey’s Tiny Cinema will be set up at the BOC location on Saturday night for its grand opening! It’s a mobile movie theater forged out of a horse trailer. It features four seats, an 8mm projector, and a screen to match. Davey performs live accompaniment to the silent movies being shown behind the screen, playing the electric ukulele with his fingers while he plays the synthesizer with his toes. Hmmm. Gotta check it out.

Other strange things happen there. Per Jeanine, business deals have been made at the BOC (yes, real, legitimate business deals, not what you’re thinking). No births or deaths have occurred during a BOC show, but two years ago, a marriage proposal took place after a show, in front of everyone. (She said yes. I have no stats on how they’re doing now, or how long marriages based on proposals made after a movie last.)

So there you have it. Despite the trend of watching movies alone on postage-stamps-sized screens, I still hold for the experience of public, communal interaction with art and entertainment anytime. And, at the Outdoor Cinema, you can get up, move around, chat quietly, go foraging. The kids can wrassle a little bit. It’s fun, it’s affordable, it’s communal, it’s spontaneous. Need I say more? 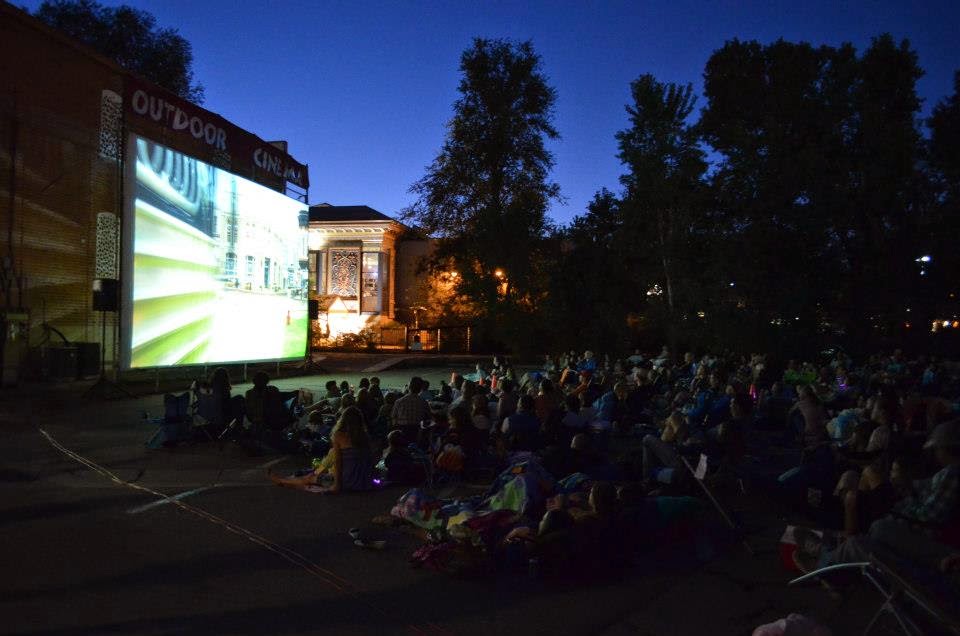