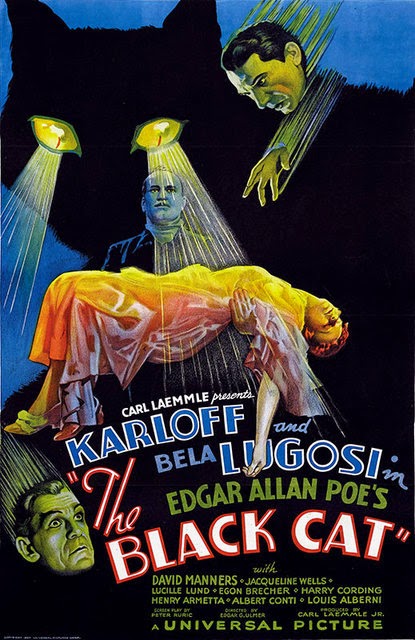 An autobiography in film; some personal milestones and revelations, for better and/or worse, in relation to movies I’ve seen.

"Horror means something revolting. Anybody can show you a pailful of innards. But the object of the roles I played is not to turn your stomach -- but merely to make your hair stand on end."
– Boris Karloff

I’m so lucky. My horror comes in black and white.

“The Exorcist” opened on Dec. 26, 1973, and turned me off horror for a long, long time. I couldn’t handle it. But up until that moment, horror had me firmly in its grip.

I am lucky in many ways when it comes to film. I was born right in the middle of the great Maerican foreign-film influx and rise of the art house; I saw all the work of the vastly creative and independent mavericks of the Silver Age of American cinema as it came out; I even caught the tail end of the dying road-show epic cycle. Thanks again to the always-on television in our home, and our parents’ lack of curiosity about what we were watching and how much (see Formative Features Part II), we got to grow up fast. A seemingly endless stream of old movies flowed, from morning ‘til what became known as the signoff -- when the stream of electronic entertainment would actually stop for a few hours.

The experience of horror as entertainment began for me in 2nd grade, when I grabbed Ray Bradbury’s “’S’ is for Space” off the school library shelf, because I vainly found my name on a book cover . . . and because it had a groovy illustration of a schematic astronaut falling into the heart of a galaxy on its cover. 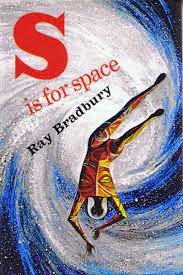 After that, it was straight on into the endless mystery and horror story collections issued under Hitchcock’s name, and a standing appointment with “The Twilight Zone,” “The Outer Limits,” “One Step Beyond,” “Thriller,” and “Alfred Hitchcock Presents.”

There were other mainsprings for me. One was the monthly copy of Forrest J. Ackerman’s enthusiastic, profusely illustrated, and badly edited “Famous Monsters of Filmland” we would run down to the drugstore for every month. 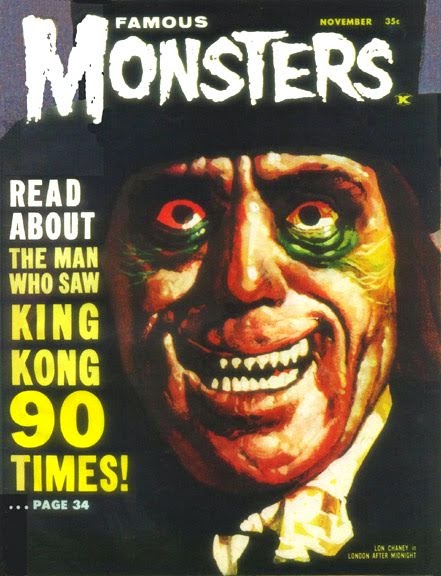 Another was the broadcasts of John Dunning, whose old-time radio shows across a spectrum of local stations taught me my power to scare the crap out of myself by suggestion only, listening in the self-imposed dark avidly to “The Inner Sanctum,” “Suspense,” “Escape,” “The Mysterious Traveler,” “The Whistler,” “Lights Out,” “The Hermit’s Cave,” “Murder at Midnight,” “The Strange Dr. Weird,” “Quiet Please,” “The Witch’s Tale,” “The Sealed Book,” “Nightmare,” “Macabre,” “Dark Fantasy,” The Hall of Fantasy,” “Beyond Darkness,” “The Weird Circle,” and so on – a cornucopia of fright that whetted my appetite.

And the most vital was “Creature Features” on Denver’s KWGN-TV, Channel 2. Every Saturday night, we would swaddle ourselves, snack-surrounded, on the basement floor in front of the clunky old cabinet television with the channel knob, pre-remote, that clicked heavily and with painful stiffness from station to station. Dipping potato chips in grape soda (try it) we would feast on “The Wolf Man,” “The Man They Could Not Hang,” “The Mummy’s Tomb” . . . 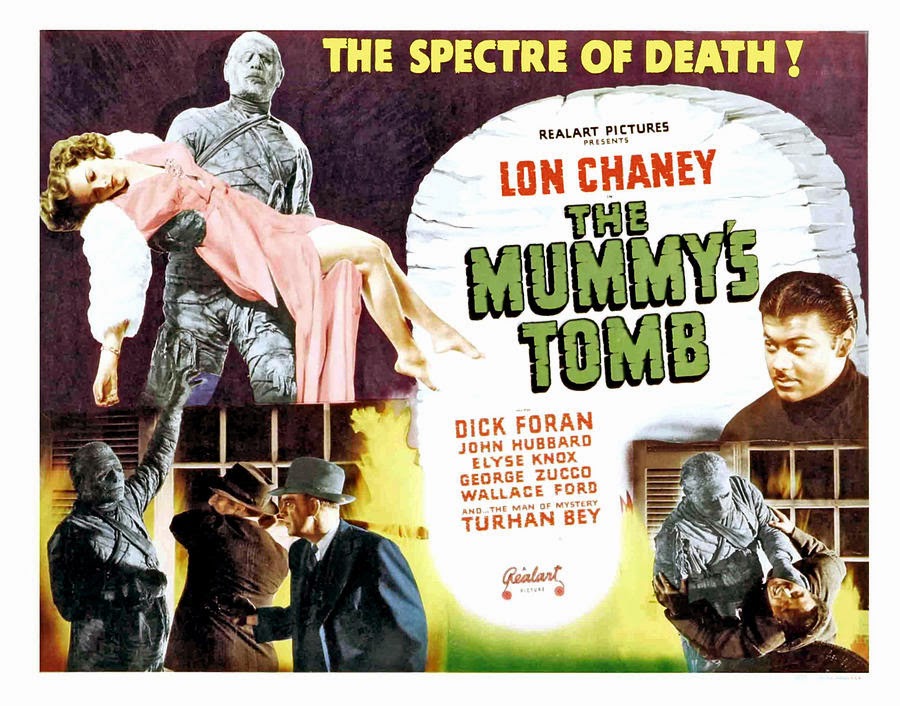 The content and format of “Creature Features” was derived from its parent station, the regional powerhouse WGN in Chicago. This was simply one title applied to what is commonly referred to today as the “Shock Theater” package, 52 Universal films (one for each week) distributed by Screen Gems, a subsidiary of Columbia Pictures for TV broadcast in October of 1957. This magical package of Golden Age horror was seen by an entire generation in more than 100 cities across the country. One year later, Son of Shock added 20 more essential films to the mix.

On Channel 2, it was punctuated by the regular and lengthy thrumming of local commercials (Sunrise Housing, Lloyd’s Furs). Sometimes they gave us something else as a chaser – we also had access to RKO and AIP horror films, some of Hammer catalog, some of the Toho and Daiei kaiju features, and a healthy side dish of pretty much all the nuclear-monster and invasion-from-outer-space-premised films from the 1950s and ‘80s.

Unlike many other local stations, we had no horror host or hostess. After several years, we picked up the super-lo-fi WGN intro, set to Henry Mancini’s theme from “Experiment in Terror,” voiced by a slowed-down voiceover from WGN's Marty McNeeley:

I loved the life-unaffirming atmosphere of the horror film. Even if virtue triumphed, there was an unstated but pervasive sense that this was but one successful battle of many. Even after the wise-cracking reporter chases the spooks away, something’s . . . still . . . around. In an age when we were all supposed to be happy, and love everyone, and look on the bright side, it was such a relief to dwell with the basement perspective that things were not that great, actually, and you could be in danger, and you might be suffering from a curse, or be a monster. That would explain a lot. It seemed to me that the Northern European vibe of bitterness, resignation, and an atavistic acceptance of weirdness in everyday life crept into these films.

In reality, a close inspection of the early horror film mise en scene shows that gloom and stylized backgrounds are not only more brooding, but a lot cheaper and faster to light and shoot, always a plus in the studio system. They would soon figure out that the same plot would suffice, over and over again, as well.
And, as so many older people always seem to claim, it was different back then. There were severe restrictions on what could be shown or discussed, even in such a debased genre as horror. While the restrictions blocked many perspectives and innovations, it also forced people to think creatively, to give rise to forbidden topics in viewers’ minds without stating them directly, and to terrify through suggestion and implication. You have complete freedom now, but no matching completeness of merit.

And the protagonists were usually played by well-spoken Englishmen. Since there has never been a strong tradition of classical acting in America, and we can barely summon the attention to parse Shakespeare every now and again, I sometimes think that in place of Olivier, Richardson, and Gielgud, we had Karloff, Rathbone, Price, Raines, Atwill, Daniell, Gray, Gough, Lee, Cushing.

Vincent Price once said, "I don't play monsters. I play men besieged by fate and out for revenge." He keys into the elevated, tragic element in horror, as the others referenced above were able to do. (It is instructive to see that, during and after playing the makeup-slathered creatures that made his reputation, Karloff largely portrayed mad scientists out for revenge, in movies such as "The Invisible Ray," "The Man Who Changed His Mind," "The Man They Cold Not Hang," "Black Friday," and "Before I Hang.") The rrrrippingly precise and upscale diction of these performers could elevate the most heinous old wheeze -- about not delving into what God did not intend us to, or how the others at the academy/hospital/university were the ones that were insane, and soon all would find out the truth, all of them -- into sublime and profound poetry. Horror was classy.

Most important was this bizarre world’s impertinent belief in itself. The bulk of the Universal horror films were shot on their “Little Europe” backlot standing set; you can recognize the surroundings easily from film to film – and in the Basil Rathbone-Sherlock Holmes series from the same time as well. These vaguely Eastern European, superstitious, kinda ign’rent, dirndl- and lederhosen-clad, beer-swilling, pipe-smoking, folk-dancing potential victims are cheery as hell, and don’t seem to remember much from one film to the next. Somehow they just aren’t up to MOVING THE HELL AWAY FROM WHERE ALL THE MONSTERS ARE. But believable and lovable, they shoulder on. 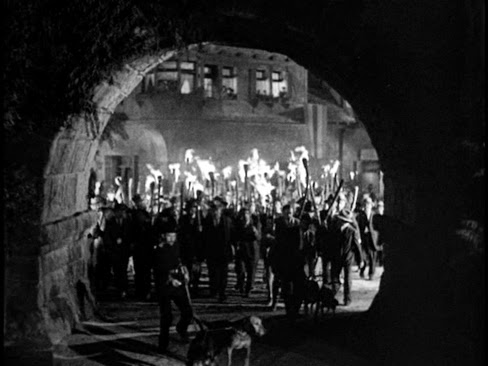 All films of the fantastic require an especially spirited suspension of disbelief, and it all starts with the performers. With a seriousness of manner found at a toddler’s tea party, the monsters, mad scientists, unbelievers, police officers, butlers, doctors, sidekicks, couples in distress, gypsies, servants, peasants, hunters, and hermits all believe implicitly in everything that crops up along the way. There is no shadow of questioning of any revelation, theory, proposition, or reasoning throughout the entire series, from starring role to smallest walk-on. Gradually, the primary roles were smoothed into archetypes, then hammered into clichés.

In the final analysis, it’s this playful gravity that makes this work so compelling. The ludicrousness of the stories, the cheapness of the settings, the unconvincing special effects, could all ironically enhance the experience, its very provisional qualities unhinging. In my essay on the 1936 film adaptation of H. Rider Haggard’s “She,” I discussed the possibility of an inverse proportion between scenic believability and the power of a fantasy narrative – as though the tawdry elements of dime-store productions contained “ the tattered, inconsistent, and unfinished constructs of the sleeping mind.”

How else could I still be so dialed in to such hokey, haunting moments. The corpses suspended  in vitrines in “The Black Cat,” while Karloff intones, “Are we not both the living dead?”; 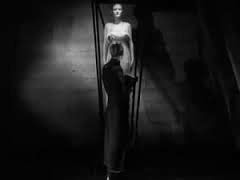 his gropes toward sunlight in “Frankenstein”; 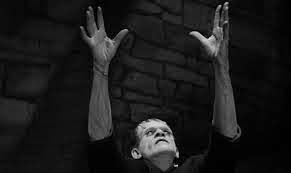 the agony of Larry Talbot; 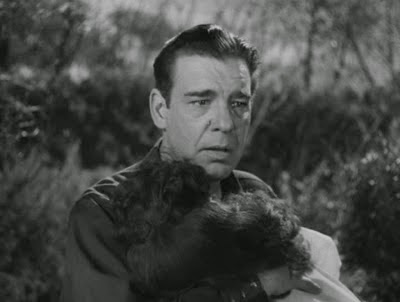 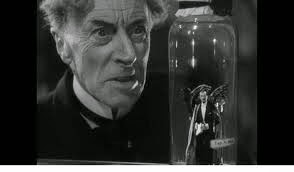 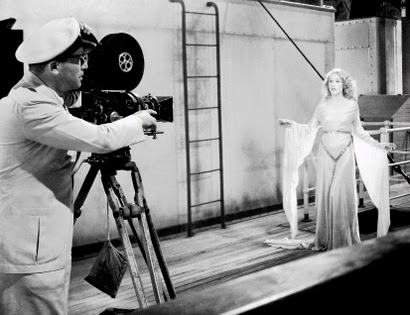 Dr. Moreau dragged into the House of Pain; 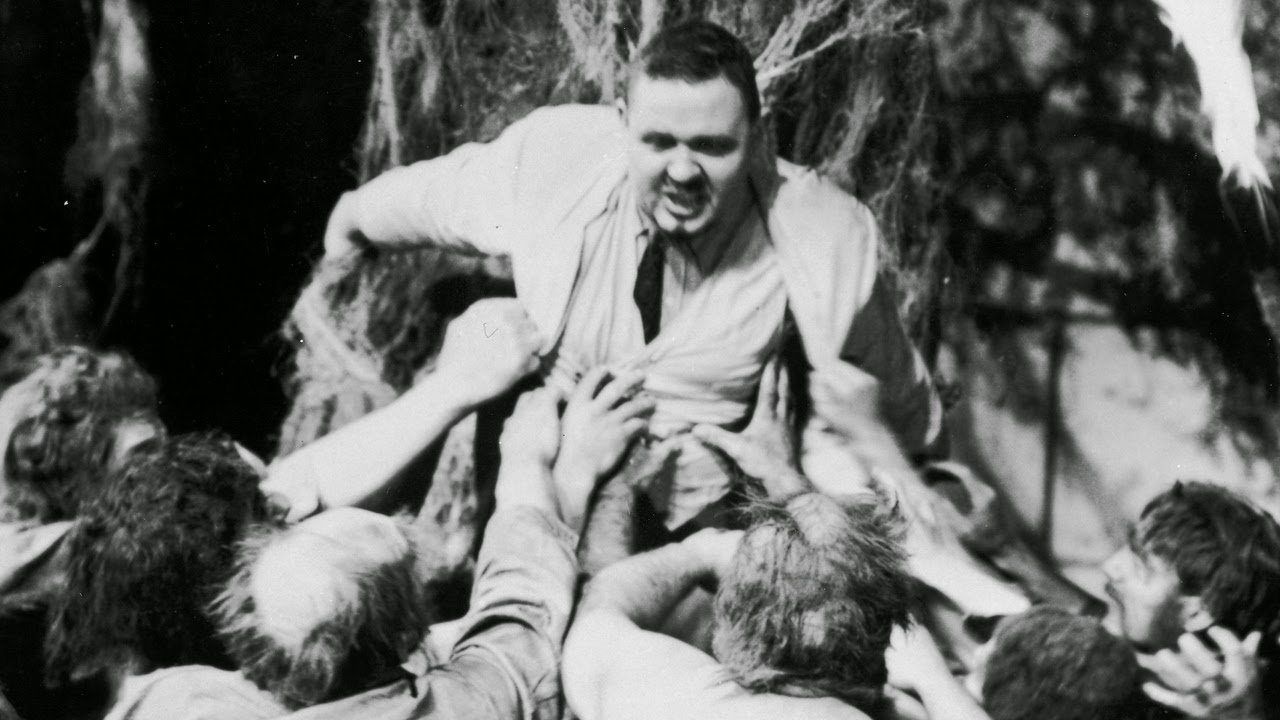 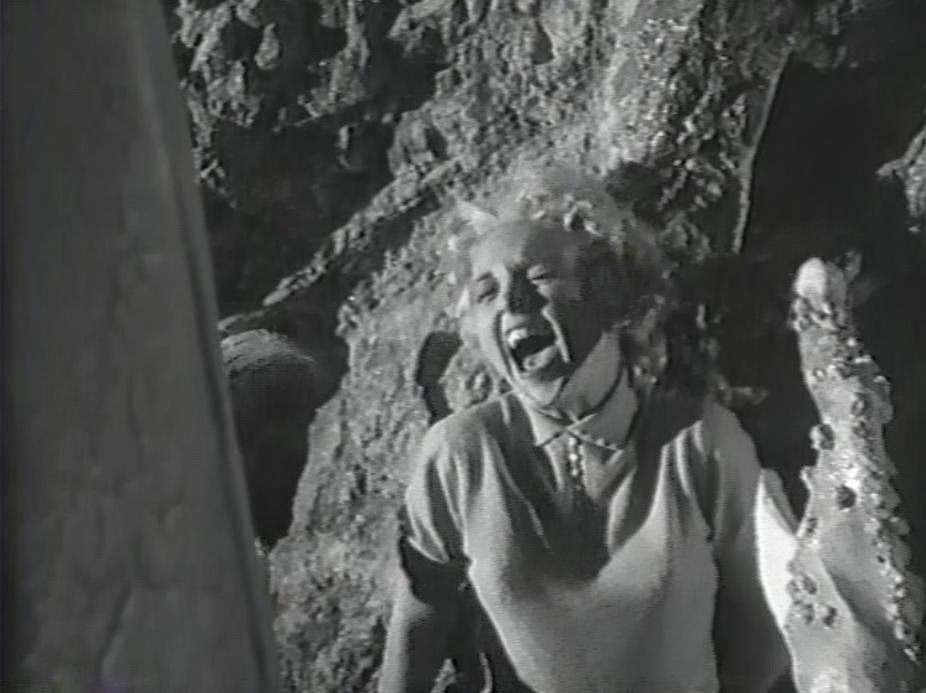 Horror programming sometimes spread through the rest of the TV schedule. The early Hammer horror films, in grisly, shocking color, filled the screen. Likewise, the Corman Poes enthroned Vincent Price in the pantheon. And the random gems: “The Amazing Colossal Man,” “The Incredible Shrinking Man,” “The Monolith Monsters,” “Crack in the World,” “The Tingler.” Even “The Incredible 2-Headed Transplant.” Even “Reptilicus.”

The welcome mat was always out. Until “The Exorcist.”

I am completely and utterly squeamish and so missed the horror-film developments of the last 40 years, until my sheer lack of knowledge led me to knuckle down and bone up on the more recent, distasteful material. The age of body horror opened, and broadened and deepened, cutting a swift channel to the mainstream. Herschell Gordon Lewis, Tobe Hooper, John Carpenter, George Romero, Wes Craven, David Cronenberg, Stuart Gordon, Clive Barker, Shinya Tsukamoto, Brian Yuzna, early Peter Jackson, Frank Henenlotter. The trio of Mario Bava, Dario Argento, and Lucio Fulci, and the giallo genre in general, were all lost to me for decades until I could push past the gore and nightmare of distortion, of lack of control, implicit in body horror. This transgressive impulse has lodged in the splatter film, the deathless-killer cycles, in torture porn. I am just not hip enough.