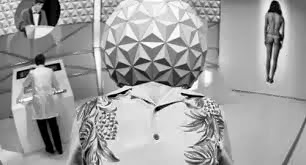 OK, let’s see hands – who else was scarred for life by the Walt Disney Company? Welcome, friends. You’re at the right screening.

The psychotic candy that the Mousemen stuffed us with was toxic. For instance: always ready to kill a character to get our attention, the Disney graveyard is chock-full of dead children, parents, animals, and anything in range that seems vulnerable and sympathetic. Bambi’s mom, Nemo’s mom, Koda’s mom, Quasimodo’s – wait for it – mom. Old Yeller, Musafa, Willie the opera-singing Whale. In addition, I must mention the hysterical fits I flew into at the sight of the imprisonment of Dumbo’s, sigh, mom, the pee-your-pants scenes of bad little boys turning into donkeys in “Pinocchio,” and the Wicked Queen (any incarnation), and the evil stepmother who locks Cinderella away.

This nightmare fodder expanded through the years to include such kooky, nutty live-action anthropomorphic epics such as “Charley the Lonesome Cougar,” and the mindless “fun” of Herbie films, and “The Computer Wore Tennis Shoes,” and “The Shaggy D.A.,”and the Flubber films, and “The Boatniks” – anything our parents could feel safe dumping us off at.

Writer/director Randy Moore has ingested all this, too, and from it has crafted a poisonous valentine to the nexus of happiness, all-American values, and sparklingly clean restrooms – Disney. It’s “Escape from Tomorrow,” a disturbing journey to the underside of the American dream. 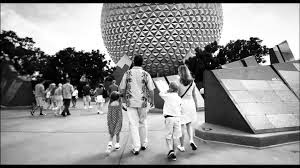 Moore, as you may know by now, shot nearly all his footage at either Disneyland or Disney World (there is a modicum of chromakey work, pasting characters into scenes, that only adds to the hallucinatory quality), working surreptitiously and without the permission of the notably paranoid and brand-controlling Disney Co. It’s an amazing task to set oneself, but Moore pulled it off over the course of three years. (To this point, Disney has chosen to ignore the film rather than sue or ask for an injunction over it.)

It does for me because, despite its focus on the Magic Kingdom, “Escape from Tomorrow” is not a satire, an indictment, or an expose of Disney. It has a larger ambition than that. It’s a fever dream about all the dark impulses that lurk when suppressed by the relentlessly grinning, happy-face, we’re-just-fine American mentality. Lust, violence, greed, madness, and death erupt willy-nilly, via the persona of the protagonist Jim (Roy Abramsohn), a typical white middle-class corporate employee with a wife (Elena Schuber) and two kids (Jack Dalton, Katelynn Rodriguez) who’s visiting the theme park.

The movie opens with Jim being fired by phone on the morning of he and his family’s last day at the resort. He’s determined not to spoil the vacation, so he acts as though nothing is wrong. Soon, however, he finds himself obsessed with two French nymphets, who he begins to trail around the park, children in tow. Mentions of a mysterious “cat flu” are dropped, and Jim finds reality changing around him. His son’s irises flash to complete black and back again, the faces of the animatronic dolls on the rides menace and resolve back to innocence . . . 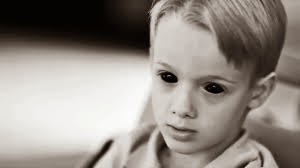 As Jim’s senses start to unhinge, he argues and parts from his wife, leads his children in and out of danger and discomfort, nearly losing each several times, and encounters an Other Woman (Alison Lees-Taylor) who blows conspiracy theories his way – are those turkey-leg snacks for sale, or emu legs? Do Disney princesses put out for rich Asian businessmen, in their costumes? She beds him, and reappears as an ex-“princess” who kidnaps children and poses them on deathbeds.

With me so far? It’s much more nebulous than it sounds. Moore keeps things ambiguous enough so that we are never sure if this is all a secret revealed, the musings of an ill man, a descent into hell, or an evil dream. “Escape” is the struggle of a typical guy to have a typical experience – then pulls his psyche inside out for examination, morphing his surroundings into a projection of suppressed desires and resentments. Everything that can go wrong does.

Key to the feeling of dread is the beautifully shaded black-and-white cinematography of Lucas Lee Smith. Despite the “Mission: Impossible”-style shooting restrictions, Smith creates penetrating, clear and well-composed shots, working the spectrum from the gloom of Tom Sawyer’s cave to the flat white glare of Florida midday. There are several astonishing pans, and tableaux composed so carefully it’s difficult to think of it being shot on the sly. (Jim’s slow, lustful advance toward the teens in a shimmering pool filled with children is an unnerving visual revelation.) At the same time, the filmmakers use unsettling, rapid point-of-view changes to keep us on edge, and use framing that always leaves us expecting something menacing to enter it. 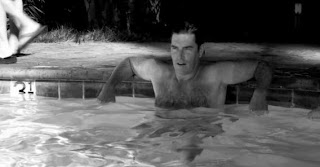 Soojin Chung’s editing varies the rhythm, too, slowing down for Jim’s moments of ecstatic and highly inappropriate longing, then chopping rapidly into fragments in scenes such as the one in which Jim searches the crowd frantically for his daughter beneath fireworks’ glare. It turns the scene into a primitive rite, a desperate attempt to avert an unjust sacrifice. There’s more than a touch of late-period Welles here, with overtones of “The Lady from Shanghai” and “Touch of Evil.”

The film’s noirish atmosphere is cemented by the riveting score composed by Abel Korzeniowski. His seemingly romantic swells of classic-period Hollywood style are rich in harmonics and lushly orchestrated, but the music’s heavy undercurrents and veiled dissonances mirror the fractures of the film itself. Once again, there is a strong tug of suggestion – here, of Bernard Herrmann and the oppressed, obsessive waltz variants he crafted for Hitchcock.

Part of my brain rejected the movie out of hand. But as the film thoroughly catalogued the many frustrations, lashings-out, and sorrows that families undergo when flung into the maw of mass entertainment, Moore’s film, for me, worked itself into an uncanny state of sunlit Expressionism, an absurd meditation that plays like slapstick Bunuel.

Are the French girls symbols of lost youth, or bratty little teens, or angels of death? All of the above. Jim’s lustful pursuit of the teens, their awkward bodies seeming to promise him carnal delight, seemed crazy . . . until I remembered that, in Disney film, sexuality is either nonexistent or infantilized.

And then, on coming home from the show, I checked my Facebook. A friend had posted a link to “Sexy Halloween Costumes.” The first image I found was the patently obvious Minnie Mouse knockoff, “Sexy Tux and Ears,” in which sex and innocence clash . . . and innocence gets bent over a chair. “Escape from Tomorrow” has a ring of truth to it.

Jim sees every dream come true. Or doesn’t. You should really judge for yourself. “Escape from Tomorrow” will not change your mind about Disney’s cultural legacy (OK, there’s a fleeting conflation of Walt Disney and Christ). It’s a cartoon funeral march, sad and moving, that stirs up and chokes on the dust of childhood dreams.