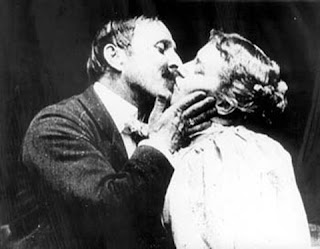 Why would a short sequence of two middle-aged, none-too-attractive people canoodling merit inclusion in the National Film Registry? This 50-foot strip of celluloid set off a firestorm of controversy, creating a wave of interest and condemnation that reinforced two facts for filmmakers – sex sells, and outrage doesn’t hurt the box office either.

The premise of the snippet is that it recreates a celebrated moment from John J. McNally’s hit 1895 Broadway musical comedy “The Widow Jones.” The performers, John C. Rice and May Irwin, play Billie Bilke and Beatrice Byke (or Jones, depending on the source consulted). The mainspring of the plot seems to have been Irwin pretending to be a widow to fend off unwanted suitors.

The scene, which is either from Act One or the play’s finale (again, sources differ – oh, to have a copy of the script!), shows the two touching heads, turned out toward the camera, and exchanging dialogue as they nuzzle. (If anyone can lip-read and send me the lines, I’d be happy to incorporate them in this piece.) Finally, Irwin seems to concede to Rice’s desire to pucker up. After a flourishing gesture with both hands that combs away his thick mustachios, Rice plants one on Irwin – or rather, he holds his lips to hers and makes several rapid moues before the film ends.

Daniel Eagan’s entry on this in his indispensable “America’s Film Legacy” states that the filming was sponsored by the newspaper the New York World, which promoted both the play and the film in a feature story. Irwin was a big star at the time. Four years earlier, she had introduced the song “After the Ball” from the stage during the show “A Trip to Chinatown” – a song that sold more than 5 million copies of its sheet music.

However, it’s not the connection to a stage hit that keeps the film in our collective memory. The two heads of the lovers fill the frame, and the focus is exclusively on their embrace. Movie patrons, editorialists and ministers all reacted with shock and dismay . . . as the revenues from the film piled ever higher. (Kissing in public, according to Tim Dirks’ “Greatest Films” website, was a prosecutable offense at the time.)

“They get ready to kiss, begin to kiss, and kiss and kiss in a way that brings down the house every time,” chirped the Edison catalog. Although France’s Eugene Pirou was creating a much more graphic striptease for pornographic satisfaction in “La Coucher de la Mariee” (Bedtime for the Bride) that same year, America’s Puritanical heritage rankled at even this chaste bout of osculation.

The in-your-face quality of the image has something to do with its impact as well. After the full-figure shots of film’s beginnings, the camera had begun to move in closer, as with shorts such as “Fred Ott’s Sneeze” (1894). The medium close-up made an impact through the viewing slit of the one-customer-at-a-time kinetoscope, and even more so when projected on a large screen to a communal audience (although the Lumieres had pioneered the public screening in late 1895, Vitascope Hall, the first movie theater, opened in the basement of the Ellicott Square Building in Buffalo, New York on June 26, 1896). Now the images were enormous, invasive, dominating a darkened auditorium in a way that no theatrical effort could match.

From this point on, a slow but steady push in the film industry against the boundaries of propriety, and a high-powered institutional battle to censor those efforts, would develop into a long-standing, symbiotic relationship. Likewise, an ever-more-savvy marketing industry would learn how to exploit the audience’s hunger for forbidden fruit while simultaneously decrying it.