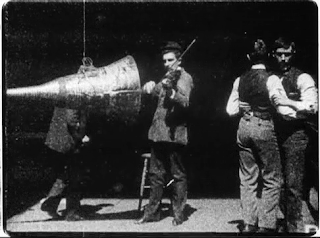 Note: Today I finally found a copy of a book I had only become aware of a week or two ago, after I conceived and began this project – “America’s Film Legacy” by Daniel Eagan. This 2010 work beats me to the punch in terms of examining all the films in the National Film Registry in chronological order (although it is 50 films shy of the present total, due to the additions of the past two years). At over 800 pages, it looks to be a thorough, scholarly and fact-packed examination of the titles in question.

So why should I continue? Usually, when a viable approach to writing about a given topic is taken, the ground is ceded to the first person to explore the territory. I decided to move forward, not because of any deficiency in Eagan’s exhaustive achievement, but because inevitably I must bring other perspectives and emphases to my survey of the same landscape. I also feel this is a journey I must take.

So, my apologies to Mr. Eagan. I’m sure I will wind up duplicating some of his observations and evaluations and pray that I will do so only unintentionally. Please look to the texts that follow – I will cite him whenever I find myself using information he has so expertly collected. My work on this project is much more informal and subjective, and its flaws are entirely my own.

This entry in the National Film Registry is not distinguished by its aesthetics, but as an ambitious technological gamble that didn’t pay off. In fact, it would take more than 100 years before its significance really came to light. Only opportune discoveries, sleuthing and determined effort chained to modern technology made its full import known.

“Sometime between September 1894 and April 1895” (Eagan), Edison’s assistant William K. Dickson attempted to combine the kinetoscope with the phonograph, presumably under the direction of Edison himself. Dickson himself stands playing a violin air into the enormous, suspended recording cone to the left of the screen. To the right, two male assistants dance together to the tune. In the last moments, an older man walks into the scene, seemingly oblivious to what’s going on.

For decades, the snippet of film existed in mute form. Finally, in 1964 a wax cylinder was found in the Edison laboratory labeled “Dickson – Violin by W.K.L. Dickson with Kineto.” Unfortunately, the cylinder was broken.

It wasn’t until 1998 that the cylinder was repaired and its content recorded and digitized. The task of mating the soundtrack to the film was turned over to highly respected film editor Walter Murch. In 2000, the job was completed.
Once the sound is cleaned up, the recording has high fidelity. Film historian Vincent Russo posits this as being the first instance of “gay” film, but the dancers seem to have been chosen for their presence in the lab rather than for their terpsichorean talents or sexual proclivities.

The men awkwardly circle in the confined space – the clean-shaven dancer grimaces comically once as he turns, and muffs a backwards step. (The tune is “The Song of the Cabin Boy,” about being at sea with no women around, from the 1877 operetta “The Chimes of Normandy.”)

Edison’s impulse to marry sight and sound was surely profit-driven. Unfortunately, the single-viewer model of the kinetoscope (viewers were to hear the sound through rubber earphones as they stared through a viewing slot at the film) could not recoup the costs of production effectively enough. In addition, the belt-driven synchronicity drivers of the time were too unreliable. For another 33 years, sound and image on film would exist independently of each other. (In fact, explanatory and mood-making devices such as intertitles, live musical accompaniment and sound effects, and even people hired to read the intertitles to illiterate audiences or simply narrators – the benshi of Japan’s silent era – thrived in the countries to which movies made their way.)

It can be argued that this temporary technological impasse was integral to liberating the film image, enabling it to sweep the world. Filmmakers were forced to tell a story in strictly visual terms, and the resulting product, focused on universals of human behavior, could cross borders with ease.

During the silent span, film was the universal art form, and its popularity meant that stars such as Charlie Chaplin, William S. Hart, Lillian Gish and Theda Bara were instantly recognizable everywhere around the world. The archetypes created during this era still resonate in the cinemas of multiple cultures, their mutations informing and enriching the medium. What fragmentation might have taken place if the language barrier had intruded in 1894?