Sternberg's "Underworld": The Peacock and the Mirror 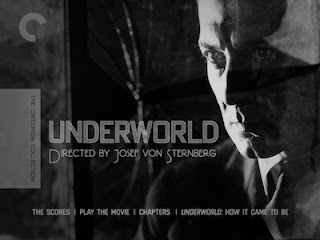 Josef von Sternberg was an indispensable pain in the ass. More on that later.

We're spoiled. 35 years ago, the only way to see a film not in current release was to hit the art houses, surf pre-cable television, or scrounge up a 16-mm film and accompanying projection system.

The advent of VHS and DVD gave everyone a ticket to the movies, and made critics, curators and analysts of us all. Still, like a spoiled brat I mope about, yearning for those titles on my wish list that I haven't seen yet. I am dying to see Marcel Carne's "Hotel du Nord," or the obscure yet fascinating-sounding 1935 Swiss feature "The Eternal Mask," and long to own copies of Edgar Ulmer's "The Black Cat" and the 1932 "Island of Lost Souls." Even much early Jean Renoir and "The Magnificent Ambersons" are not available in Region 1 (North American technology-compatible) versions.

So, when I get to cross off THREE films at once, I'm ecstatic. Thanks to the wonderful folks at Criterion, "3 Silent Classics by Joseph von Sternberg" is finally here, and I finally got to bump off the first American gangster film feature, his wonderful 1927 "Underworld." ("The Last Command" and "The Docks of New York" complete the Criterion package.)


To be sure, von Sternberg didn't invent the genre -- D.W. Griffith appears to have in his 1912 short drama "The Musketeers of Pig Alley." Louis Feuillade's "Fantomas"/"Les Vampires"/"Judex" serials trilogy of 1913-1916 first posits the idea of the city as a landscape of criminal terror. The evil mastermind, the shifts of identity, and above all the concept of a gritty parallel universe where values are reversed all start here. Fritz Lang elaborates on these themes masterfully in his own early works, "The Spiders," "Dr. Mabuse the Gambler" and "Spies."

Early Depression Era paranoia and cynicism helped feed "Underworld"'s mood. The screenplay was written by Ben Hecht, the ex-Chicago newsman who co-created the quintessential world-weary view of city life in the play "The Front Page," and went on to have a hand on many of the most significant American screenplays of the Studio Era.

The notoriously assured and imperious Sternberg ignored what he pleased of Hecht's work, infuriating the writer, who asked to have his name removed from the credits -- until the picture became a smash hit and earned him the very first Oscar for Best Original Story. Janet Bergstrom's fascinating and top-notch visual essay on the "Underworld" DVD is undergirded with rigorous research, and discusses the post-scenario revisions by the director.

At least at this stage of his career, Sternberg was making changes that helped to tell the story. He assumes the viewer's intelligence, jumping into the story without preamble and letting us determine character and relationships as the narrative breezes along. The central romantic triangle, consisting of crime boss Bull Weed (George Bancroft), his intellectual drunkard minion Rolls Royce (Clive Brok) and moll Feathers (Evelyn Brent) are defined through image and action, not through intertitle or indication.

Sternberg's technical knowledge allowed him to turn down the bright, flat studio lights and achieve a depth and dimensionality, a gradation of shades, not seen in any contemporary's work save for F.W. Murnau. His visually ravishing mise en scene, even in locations of squalor, enriches the viewing experience immensely. His choices inform films in the genre all down the line -- from Hawks' "Scarface" (the enormous blinking advertising sign that declares "THE CITY IS YOURS") to Huston's "Maltese Falcon" (the criminal's final, thoughtful descent down a staircase to his fate) and beyond.

Although he later scorned his work on this film in his autobiography "Fun in a Chinese Laundry," Sternberg would become less attached to his characters, and to exploring emotions outside the realm of desire -- for sex, for power, for control. He outsmarted himself. While the look of his films became more sumptuous and complex (and expensive), his narratives lose their way. His sense of sureness about his talents led to an infuriatingly overbearing and controlling manner that eventually wore out his welcome in the film community. 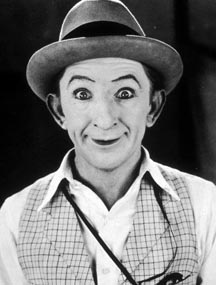 An ironic touch in "Underworld" is his use of Larry Semon in a supporting role as "Slippy" Lewis, part thug, part comic relief. Semon, one of silent film's now-ignored popular figures, at the time was trying to fight his way back from a massive debt and loss of artistic control. He had been, at one time, Chaplin's rival; however, his insistence on expensive production work and waning directorial skill killed his career.

In "Underworld," his goony whiteface character is replaced by a more measured performance -- one that takes him seriously as an actor and reveals levels of dignity unthinkable to viewers who have only seen his comic films. A year after "Underworld" was made, Semon was dead -- a victim of a combination of physical and emotional breakdown. Would that Sternberg had seen that writing on the wall.


Von Sternberg, like his fellow directorial adapters of the faux "von," von Stroheim and von Trier, combined innovation and audacity, arrogance and insight, producing work that intrigues despite its increasing tone-deafness. "Underworld" and other gems show him at the height of his powers.
Posted by BradWeis at 10:02 AM