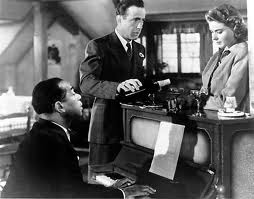 After the German invasion of Paris on June 14, 1940, its perception via American movies changes forever. Paris ceases to exist as a real if faraway alternative to the humdrum lives of moviegoers. Paris is now a lost Eden, a bittersweet memory of beauty and pleasure and romance – a city violated by the Nazis and irretrievably tarnished.

In America’s greatest romantic drama, Paris symbolizes everything the central, estranged couple of Rick and Ilsa have lost – unreflecting love and doomed innocence. The long flashback that outlines their time together lets us see the chemistry between them (as well as a little fuller toupee for Bogie) and drives home the shock of Ilsa’s supposed betrayal of Rick, justifying his bitterness towards her and just about everything else.

By film’s end, after the former lovers have shared one more night of passion, Rick has decided to do the noble thing and send Ilsa off with her husband (of course, our hero gets to have his cake and leave it too). “We’ll always have Paris,” he tells Ilsa. “We didn't have, we, we lost it until you came to Casablanca. We got it back last night.” Paradise is regained, at least as a sustainable memory.

Nasty, dirty old Paris, destroyer of dreams. It took a while for the tales of the Lost Generation to reach the screen. This adaptation of Maugham’s novel is the Paris of pimps, boites, apache dances and that damned accordion music. Here Sophie, played by Anne Baxter in an Oscar-winning performance, runs into her old friends, who are slumming, after she’s tumbled off the wagon and into a Gallic cesspit of sin and despair: 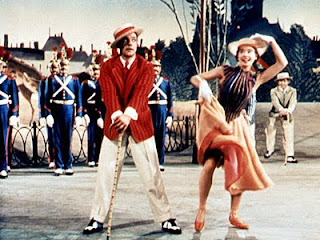 1951’s Best Picture is an over-the-top frothy concoction crammed with lush color, shape, movement, whimsy, and full palette of preconceptions about Paris as playground. Gene Kelly rules the fake streets of the city, and Minnelli whips up his most exuberant outing ever – even if it doesn’t have much of a story behind it. Here Paris is a postwar fever dream. The Americans IN Paris in 1945 liberated the city and laid claim to it, made it, in a sense, a province of the American imagination.

MGM’s monolithic production resources and methods dominate and turn the town into kind of Disneyland. It’s as if the giddy, infectious naiveté of the Yanks who reconquered the city make it their personal keepsake, a theme that is to recur frequently over the next few years.

An anomaly -- an honest attempt to do more than a standard biopic, this life of Toulouse-Lautrec tries to capture not just the historical period, but to replicate the painter’s style onscreen. Color, line, atmosphere and form are carefully chosen. The result, while not the most gripping life story ever told on film, is one of the most faithful to the spirit of its subject.

Four of the next five films concern themselves primarily with the romantic alliance of an older man and a younger woman. Three times, that woman is Audrey Hepburn. Huh?

This plot is so strongly on the mind of filmmakers of the period, especially Stanley Donen. It’s perhaps symptomatic of a postwar male nostalgia, a not-so-hidden fantasy of middle-aged men to conquer an innocent, charming beauty in the most romantic place possible – proving that when it comes to vanity and wistfulness, men are woefully underestimated. Call these “The Bridges of the 4th Arrondissement.”

Sigh. What makes a film a family classic that endures for all time and spawns several lucrative sequels? That quality eluded the makers of “Gay Purr-ee.” 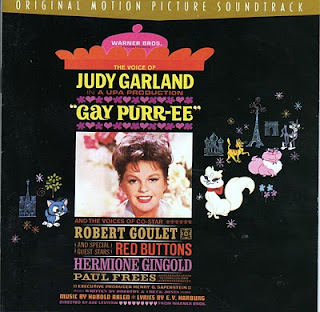 Why? It has all the right people working on it – Chuck Jones supervised it, Harold Arlen and E.Y. Harburg wrote the music and lyrics. It uses the voices of Judy Garland, Robert Goulet, Red Buttons, Mel Blanc, and Hermione Gingold. It’s an adequate time-passer for kids, but it doesn’t have the ineffable something of even a Silver Age Disney production. Somehow, Warner Brothers, as brilliant as it was with its cartoon shorts, could never really pull off a full-length animated film.

Paris fades out as a locale of focus during the New Hollywood era. Everyone was using the American landscape as a canvas for its art films, and the Yanks caught up with Europe filmically, at least in pretension. When the power of the rebel generation of American directors faded, and the Era of the Blockbuster came in, Paris returned, but only as a kitschy, self-conscious reference point. At its most elemental level, it became just another urban area that was a great setting for a car chase.

Another title that has been made into film countless times, for better and for worse. This version, by far my favorite, adheres to the novel with surprising faithfulness, right down to the sprightly, offhand tone with which Dumas imbued it (having George MacDonald Fraser, the author of the “Flashman” novels, writing the adaptation helps quite a bit). The filming took place of course, not in France at all (lesson: want 17th-century Paris? Go to Madrid). But it FEELS French – Lester and his cohorts have whipped up a palpable fantasy of action and romance and wit and style, peppered with the countless small details and bits of business that Lester uses in his films to create one teeming, Brueghelian set piece after another.

Lester’s crowning achievement also led to the abrupt end of his career. First, the producers made two films out of one set of performances, and triggered a bunch of lawsuits. When the third film in the trilogy, “The Return of the Musketeers,” was made in 1989, superb comic and character actor Roy Kinnear was killed in an equine accident during shooting. This incident seemed to destroy Lester’s desire to make more films.

Another anomaly. Rudolph’s quirky style is aptly served by this shaggy-dog story about art and intrigue, and except for a couple of canned shots of Paris, this was all shot in Montreal.

City as obstacle course. Frankenheimer decided to film the ultimate car chases, and he did – one of them intricately choreographed in Paris. 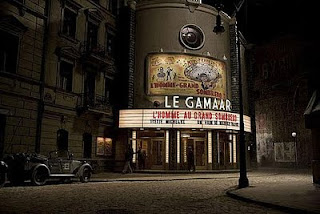 Now that we’ve thumbed through Hollywood’s take on Paris, we can move on to the real deal – French filmmakers and their use of the city. We’ll make the transition in the next chapter, through a short entr’acte that looks at two compilation films – 24 views of Paris in 213 minutes.
Posted by BradWeis at 4:37 PM