'Crack in the World': "How many men have had the opportunity to turn the page of history?" 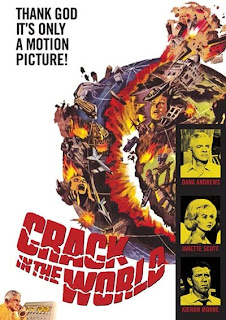 Oh, frabjous day! Finally one of the cheesy sci-fi classics of my childhood is out on DVD.

"Crack in the World" came to the drive-in in 1965. It was directed by Andrew Marton, best known for his 1950 adaptation of "King Solomon's Mines" with Stewart Granger, his initial 1964 adaptation of James Jones' "The Thin Red Line," and lots of action TV work on series such as "Flipper" and "Daktari."

This gloriously overblown film has everything a seven-year-old would love -- lots of exploding miniatures, scenes of panic and mass destruction, bombastic dialogue, torrid romance, the dropping of an H-bomb into a live volcano -- the fun never ends. Take a look:

It's hard to believe that Dana Andrews had already achieved sobriety before accepting the role of Nobel Prize-winning scientist Stephen Sorenson. His noble plan to provide the world with energy released from the earth's core is a good one -- but when he fires a nuclear missile into the middle of the planet, it goes all Humpty-Dumpty on him, creating a fast-moving fissure that threatens to split Terra in two.

And if that isn't bad enough, his dish of a scientist wife (Janette Scott, soon to become Mrs. Mel Torme) and he run into her former lover, the brawny Dr. Ted Rampion (Kieron Moore), who thinks that Sorenson is out of his Nobel-winning mind. Crack above, triangle below.

Sorenson's arrogance and determination to accomplish one more world-changing event before his terminal cancer overtakes him slows down the attempts to stop the destruction. 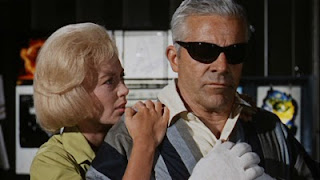 Once again, mankind takes the powers that should be wielded only by a Higher Power and uses them to jeopardize life as we know it. The post-Hiroshima paranoia and distrust of the secular cult of science that dominated post-World War II thinking runs rampant here.

And it's so cool! Scott and Moore had teamed previously in the 1961 film version of "The Day of the Triffids," another cautionary tale about hostile flora. John Douglas' score is heavily indebted to the swinging, brassy Bond themes John Barry was putting out at the same time. Production designer Eugene Lourie, who started his career working with Jean Renoir, handles the old-school special effects with aplomb (he had already helmed movies like "Gorgo," "The Beast from 20,000 Fathoms" and "The Giant Behemoth.")

We children were spellbound for weeks after seeing it, debating the niceties of tectonic repair and dreaming of saving a luscious blonde scientist from the clutches of her creepy old husband. A popcorn movie par excellence!

Now, to keep pushing for the release of the splendidly curdy "Atlantis, the Lost Continent"!