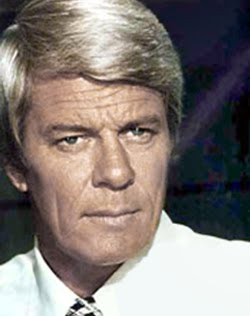 The March 14 death of actor Peter Graves has ignited a firestorm of fond tributes. The best of them recognize that his success was predicated both on his looks and sober demeanor -- and on his ability to roll with the punches and have fun poking fun at his own authoritative image.

He will be best remembered as the long-time leader of the Impossible Mission Force (Steven Hill as Dan Briggs was the IMF leader for the first season) on TV's long-running "Mission: Impossible." The series was a childhood favorite of mine. The Cold War dynamics of the period made spying an aspired-to profession for young TV watchers -- and "Mission: Impossible" was a blast, year after year.

Here's the show's propulsive Lalo Schifrin theme, along with a mash-up of some of the show's distinctive opening teaser montages:

Graves came back for the 1988 revival of the series, which only lasted two seasons:

However, Graves' career began just as Golden Age Hollywood was falling apart. The studio system was eroding away, thanks to the encroachments of television. Graves followed his brother, the equally well-known James Arness (TV's Sheriff Matt Dillon on "Gunsmoke") out to the West Coast, and racked up a few credits in films, including two gems -- Billy Wilder's "Stalag 17" and Charles Laughton's "The Night of the Hunter":

More importantly, though, he honed his craft in a number of Z-grade sci-fi and horror flicks, such as "Killers from Space":

"The Beginning of the End":

. . . and the sublime "It Conquered the World," with Lee Van Cleef and Beverly Garland!

Somehow Graves survived all this, and started getting series such as "Fury" and "Whiplash," and finally made his mark in "M: I."

Of course, his appearance as Captain Clarence Oveur in "Airplane!" will always be the comic high point of his career. He proved he could laugh at the persona he had so carefully crafted over the years, that of the epitome of calm, unsmiling, tight-assed masculinity:

And from thence to his hosting duties on A & E's "Biography" series, and a long-time commitment to silencing gasoline-powered leaf blowers. Good for you, Peter!

By all indications, he was by and large what he seemed to be -- a regular guy, genial and decent, solid and dependable. I'll miss him.
Posted by BradWeis at 1:47 PM