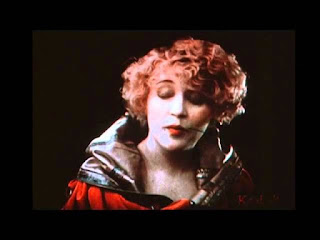 This interesting snippet of film chronicles just a part of the effort to produce movies in color. James Layton’s comprehensive essay on the footage can be found here.

The quest to make films in color took many years to succeed. Here, Kodak laboratories created an early “two-strip” color film using red and green filters. Merging the two separate filters into one, something like color resulted (although it required intense, hot lighting and could not capture the cooler parts of the spectrum). Pictured in the test footage are various models and actresses, posing to test the new medium.

This early “Kodachrome” did not catch on. It was the Technicolor process that eventually won out, and it was not until 1935’s Becky Sharp that a feature-length color film was made with it.

The NFR is one writer’s attempt to review all the films listed in the National Film Registry in chronological order. Next time: Safety Last! (1923).