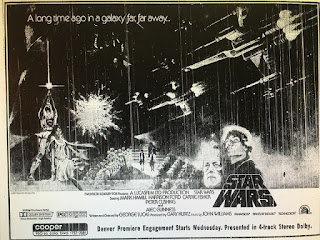 It was a harmonic convergence of factors — a great film seen in a great venue at precisely the right time of life.

The first time I saw Star Wars, I hated it.

Now wait, let me explain. How could I have been such a bonehead? Well, first and foremost, as a lifelong snob I have always looked askance at the mainstream and popular. My taste serves as an inverse barometer — if I don’t like it, it will be a big success. I have a great long list of popular movies that make me screech, and another of guilty pleasures that I love but that baffle the rest of mankind.

Star Wars became a blockbuster entirely by word of mouth. Critical reaction at the time was largely positive, but not ecstatic enough to justify what was happening, which was that people were seeing once, then again. And again. It was movie as thrill ride, and we were thrilled.

And if you were within striking distance of Denver, you had to see it at the Cooper. 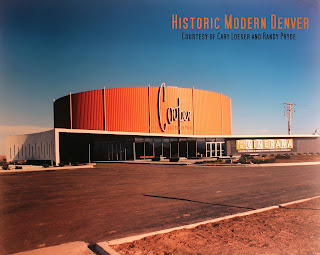 The Cooper Theatre was a magnificent modernist temple of cinema. It opened in 1961, and was designed to show immense Cinerama and 70-millimeter masterpieces such as How the West Was Won and Lawrence of Arabia and Spartacus. It sat 800 comfortably in a spacious burnt-orange auditorium; such was the culture in those days that smoking lounges — segregated, but significantly not sealed off spaces in the back of the house and even a “crying child” room to which parents with unruly young ones could retreat and still see and hear the film via glass partition and remote speakers.

It was the perfect space in which to experience Star Wars, fast-paced and full of special-effects wonders. The broad curvature of the screen encompassed our fields of vision, so much so that viewers in the front were engulfed and overwhelmed by the experience.

We didn’t go opening weekend. The friends that went came back astonished to the point of catalepsis, and determined to get us in the theater as well. So we all piled in whoever’s car and grafted ourselves to the end of the long line of ticket buyers.

We made it at last and sat down front. The initial viewing experience was overwhelming. Remember, animation and special effects hadn’t really improved since 2001: A Space Odyssey; the look of most of 1970s sci-fi was very cheesy, unconvincing, and frankly dystopian. Outer space in Star Wars looked great — Industrial Light & Magic, using newly minted computer-assisted and digital techniques, helped to craft an extremely dynamic and detailed imaginary universe. The elements weren’t there to push the plot forward — the plot was there to push the elements forward. Star Wars was intoxicated with its own vision.

Once the show was over the complaining began. I recognized a paste-up job when I saw one, what Pauline Kael referred to as “an assemblage of spare parts.” It’s a compendium of B-movie film clichés, right down to the Saturday-matinee wipe transitions from scene to scene. Here were moments of swordplay right out of a swashbuckler, and dogfights shot and edited to mimic the aerial combat of WWII films. There was the feisty heroine and comic sidekicks (hello, Kurosawa’s The Hidden Fortress), the rakish ne’er-do-well along the lines of Gable, Flynn, or Holden, the men-on-a-mission ending. It was old-fashioned, a return to popular, escapist film entertainment.

I went back a week later, this time on a date, and this time I let go and just let myself get swept up in it. (It helped that we sat in the back this time.) This time, I dug it — the fantasy and adventure elements working together, the earnest energy, the bold-faced silliness, the video-game editing, all crowned with an essential optimism and a surfer-dude philosophy (“May the Force be with you”). Even the plainly derivative sequences were fascinating, a game of referential hide and seek to be played by the viewer. It was a nerd’s paradise.

We loved it, we saw it again and again. We memorized it. In fact, we wrote and performed an hour-long radio parody of it when we supposed to be doing our homework. Forty-some years later, we’re still watching.