The NFR Project: 'The Making of An American' 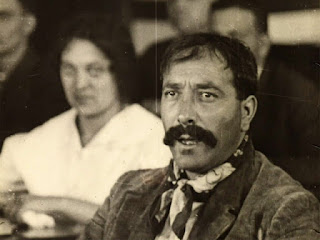 It could be the first public service announcement.

The Making of An American is an educational film created for the State of Connecticut Department of Americanization by the Worcester Film Corporation in 1920. It promotes the learning of English by immigrants; in a larger and more subtle sense, it’s a blueprint for their aspirations. It’s a quiet little masterpiece of idealism.

Then as now, there was extreme concern by white nationalists that immigrants were going to take over and ruin the country — only then, the fear was of incomers from Italy and Poland (the film incorporates both languages in places, a reach out to its target audiences). Then as now, immigrant minorities were stigmatized both for sticking together and for demanding integration and equality. This short is a practical parable about the ideal path outlined for the (presumably legal) immigrant in American democratic process. The path to political consequence starts with the wisdom of assimilation.

First we see poor Italian Pete. He’s just off the boat, and hopelessly monolingual. His already naturalized friend Tony shows off his house to Pete — a concrete, universal aspirational goal is established. Next, Tony tries to land him a job. The supervisor addressed is never humanized; he’s simply a man at a desk with his back to the camera. “Do you know how to work an elevator?” (Ironic foreshadowing!) “Can’t he talk English?” No job for Pete.

Pete ambles down the street until he hears a man speaking his language. He is supervising day laborers digging a trench. Can Pete work here? Yes, he can. It’s about the only job he can get, and it’s not a pleasant one. “There are always jobs enough in America, but not the kind Pete expected.” Even the cartman into whose vehicle Pete shovels debris seems to be grinning derisively down at him.

Pete is trapped in a hell of his own making. “The dream of a beautiful home has vanished. The day’s toil ends in a sordid tenement, amid noise and dirt.”

Now comes the crisis. Pete can’t read the sign ‘WHEN BELL RINGS KEEP CLEAR OF THE GATE”, falls down the elevator shaft, and breaks his leg. As he limps away from the hospital, he sees a sign advertising English classes. Chastened by fortune, he enters, reluctantly.

“By easy stages, the sounds of English became familiar to the foreign ear.” The teacher coaches the class through the symbolic phrase, “I – open – the –door.” Now he’s part of something, a larger group, a similar set of adults engaged in movement toward a common goal. Pete struggles to repeat a phrase, then smiles as he masters it. He is adapting, redeveloping himself into an American.

Time passes, and Pete is wearing snazzier clothes and sporting a cigar. Things are happening for him. Pete can now communicate, take instruction, operate heavy machinery. Pete can contribute more to the economy, his value has risen. “Now it’s up to you to make good money!” says the boss.

One year later, and Pete graduates from his English course. He can read, write, and speak the language. “And at the factory Pete had at length gained the position to which his real ability entitled him.” Now Pete’s the boss, in a nifty straw hat! Now in comes a new, struggling, wolfish-looking immigrant — who can’t speak English. Pete has a flashback. Of course, he counsels the young man to do as he did.

The years pass, and Pete’s got a home, and a wife, and an arbor of grapes, an explicit symbol of earned merit, sufficiency, and peace. He is noted for his “public spirit” and is chosen to be head of the “Safety Council,” improving working conditions. He becomes a benefactor by taking his civic responsibility seriously. At a council meeting, he rises and speaks with apparent eloquence and verve. He is somebody.

“IF YOU KNOW MEN OR WOMEN WHO DON’T KNOW ENGLISH, URGE THEM TO GO TO NIGHT SCHOOL” declares the film at its finish. The benefits are straightforwardly articulated. That the path to empowerment wasn't so smooth or sometimes failed to materialize is outside its purview.

The English-language assimilation in my own family had its own pattern. The ones who came over on the boat learned English with varying degrees of success, but still thought and dreamed in Danish and German, and still spoke it to each other. (It helped that they had their own foreign-language presses, and newspapers, which perpetuated the mother tongue.) Their children, born here, zealously embraced their American identities — not that they spurned their heritage. The children of those children, my parents, knew only fragments of the immigration narrative, pieces jumbled and lost. I still fumble with the pieces, trying to put them all back together.

I leaf through my great-grandfather’s sermons, wrought in excellent penmanship, entirely in Danish. I sigh and look at my Danish-English dictionary and sigh and wonder when I will find the time to work the magic backward, to sail over the linguistic sea and relearn the mother tongue, to unlock his long-dormant thoughts.

The NFR is one writer’s attempt to review all the films listed in the National Film Registry in chronological order. Next time: ‘The Mark of Zorro.’