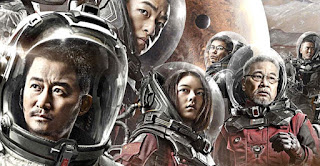 In recent years, China has stepped up as the world’s largest consumer of entertainment. The gravitational pull of its enormous audience means that, for years, Western films have been rewritten and recut to appeal to Chinese audiences (and Chinese censors). Now the Chinese film industry is cutting out the middleman and producing its own blockbusters, films completely off the West’s radar such as the romantic comedy The Mermaid, adventure films such as Wolf Warrior 2, and fantasies like Journey to the West: The Demons Strike Back.

The new science-fiction epic The Wandering Earth is garnering attention due to its unpromoted posting onto Netflix this week. Why the streaming service would choose not to trumpet such a profitable film smacks of cultural prejudice. Why not promote the hell out of it? Can China produce a viable blockbuster, and is it worth seeing?

Yes on both counts. The Wandering Earth breaks no new ground, but it is entrtaining, kinetic and visually rich, mounted firmly on the template of the by-turns wisecracking and tear-jerking action flick.

Like many another science-fiction film, the premise is ridiculous. The sun is unexpectedly expanding, and Earth is threatened with destruction. Scientists discover another viable star to orbit, “only” 4.2 light years away. Outfitting the planet with 10,000 “Earth engines” to push it through space on a 2,500-year journey to its new home is a practically unworkable idea — but if you let go of that, the movie flows along nicely. (There's already a good story by Emily Rome via Inverse about the scientific plausibility of the film.)

The conflict of the film stems from the Earth’s flyby of Jupiter, intended to give it a gravity assist to propel it out of the Solar System. Unfortunately, Jupiter’s gravity knocks out many Earth engines and threatens the Earth with capture and destruction by the giant planet. It will take the efforts of astronaut Liu Peiqiang (played by film star Wu Jing), his estranged son Liu Qi, and assorted misfits to come up with a strategy to save the planet. (Comic relief is provided by the half-Chinese, half-Australian goofy ne’er-do-well Tim; is this a slam of Western slackerism?)

The defining feature of The Wandering Earth is its relentless pace, it nervous giantism. It mounts set piece after set piece, each one bigger than the last. Director Frant Gwo has obviously studied the work of directors George Miller and Luc Besson; unfortunately, he’s also studied Michael Bay and Jerry Bruckheimer. The movie strains to prove its technical chops, and it succeeds; it looks great. But narratively, the result is like an overpacked closet — you open the film, and everything comes tumbling out, overwhelming you.

Something is ALWAYS on the verge of not working out in the film; it’s one last-second escape to the next. Imagine a film made out of nothing but climaxes, and you have The Wandering Earth. The breakneck pace is halted only when an emotional speech needs to be made, during which everything comes to a shuddering halt. The production design is Standard Gritty Futuristic, with inventive art direction by Ang Gao; Roc Chen’s score is a horn-heavy imitation of the swelling orchestral accompaniments we’ve come to expect with this brand of fare.

So, our heroes struggle again and again to overcome impossible odds. Given the relentless stimulation the move feels compelled to provide, it’s hard to maintain the emotional through-line the movie is trying hard to lay down as well. The film premiered in Chinese New Year — a time when families gather together from across the country (and go see movies together). At bottom, The Wandering Earth is about family connecting — a father with his children, a brother with his sister. This gives the film just enough heart to keep it from floating away on a cloud of technological frenzy.

And there’s a hint of subversiveness as well. The hero must override a HAL-like computer system, and bureaucratic resistance from the never-seen United Earth Government, to save the day. Considering how conformist we’ve been taught Chinese society is, it’s refreshing to see a little unilateral John Wayne-style action take place.

So, with The Wandering Earth it’s obvious that China can replicate Western tent-pole cinema. Now: can it do better?