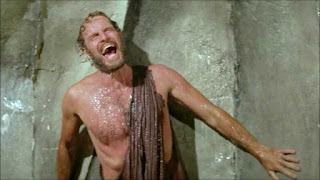 It’s not easy being Chuck. Let’s start with the fact that Charlton Heston’s birth name was John Carter. This doesn’t sound too bad, unless you consider that one of Edgar Rice Burroughs’s great pulp heroes, one familiar to every American boy in 1924, the year Heston was born, was John Carter of Mars. It would be the equivalent of naming your kid Tarzan or Zorro . . . or even Johnny Utah.

Before Charlton Heston became a liberal bugbear at the end of his life, he was pretty much as close as you could get to a deity in Hollywood, the epitome of the Leading Man. He played a panoply of sinewy nostril-flaring heroes such as Buffalo Bill (Pony Express, 1953), Andrew Jackson (The President’s Lady, 1953) and The Buccaneer, 1958), Moses (The Ten Commandments, 1956), John the Baptist (The Greatest Story Ever Told, 1965), “Chinese” Gordon (Khartoum, 1966), Michelangelo (The Agony and the Ecstasy, 1965) Ben-Hur (1959), El Cid (1961), in ever larger and more epic productions. Even his Harry Steele in the B movie Secret of the Incas (1954) was the template for Indiana Jones.

His gallery of cinematic nobles all have an unmistakable tang of American-ness, a rough-planed athletic contrast to his usual array of flabby, British-accented opponents. (Since the days of Charles Laughton, the task of playing many a nefarious cinematic Roman, Egyptian, Scythian, Atlantean, or what have you has fallen to Britons. Something sinister about those round, rolling tones.)

Although Heston has been often parodied as the archetype of the tight-assed, sweat-glistening, stiff-chinned, teeth-clenched protagonist, there are a number of subtle and nuanced performances of his to look at as well. He continued to return to the stage throughout his life, not something a lazy actor would indulge in. If you doubt his abilities, check him out in roles such as Cardinal Richelieu in Lester’s Musketeer films, various projects produced and/or directed by his son Fraser (Treasure Island (1990), A Man for All Seasons (1988), The Crucifer of Blood (1991), and most notably as the lead in the eponymous Western Will Penny (1967).

Somewhere in between these pitches of performing acumen are three films that burned themselves into my brain. One after another, they trooped through our little local cinema and form a trilogy in my mind. They all share two ingredients – Chuck Heston wrenched out of context, a humorless hero lost in a world not of his own making – carted along with a dim view of humanity’s chances for survival.

What motivated him to take on these three films? After the crashing failure of his final two big-budget epics, The War Lord (1965) and Khartoum, he was looking for something different. When Planet of the Apes, the best-remembered film of the three, made seven times its production costs, it meant not only that sci-fi was seen as viable for grown-up audiences, but it spawned a franchise that has endured nearly a dozen iterations and two reboots.

Heston in his autobiography calls it “. . . the first of the space operas . . .”, conveniently forgetting a long line of precedents stretching back to Melies’s A Trip to the Moon in 1902. It was, however, the first sci-fi feature film that was to pick up on the pessimism and social criticism that had been a strong strain in the genre in print, on radio and on TV for at least a decade. Planet of the Apes quite literally makes monkeys out of cultural conceits about identity, history, censorship and repression, and creationism.

Heston writes that he saw his character Taylor as “a cynical misanthrope, so disenchanted with his fellow man that, perhaps unconsciously, he’s exiled himself from Earth, launched through time to an unknown future.” He ends up the last of his species, stripped and led around by a collar, prodded, hosed down, beaten, brought to heel, pleading for respect. The Alpha Male as Housepet.

Highlights: the amazing Jerry Goldsmith score, which almost singlehandedly dragged film composition in to the 20th century, the award-winning makeup, and the actors who had to act through the makeup somehow, so effectively.

In “The Omega Man,” he’s the Alpha Male as Antichrist.

It’s the second of three screen adaptations of the endlessly inventive Richard Matheson’s 1954 novel I Am Legend. It’s a great template for a story – last man on Earth vs. vampire/zombies. In this version, plague survivor Neville (Heston) fights not the unholy dead but some diseased, hooded albino mutant Luddites who reject and want to destroy all technology. (Of course, this makes it that much easier for Chuck to blow them away – they fight only with spears, arrows, and flame.)

Heston’s character roams the deserted city during the day, an urban hunter/gatherer, with mutants in his sights. Like the Caucasian upper classes he represents, he lives with every creature comfort, in complete freedom and in complete isolation. He’s the coolest guy in town, but he’s still a thin-lipped, tight-assed white devil. It’s only when he finds that not only are there other non-mutant survivors, but that his blood can be used to cure the mutants, that the parable takes a hard right turn – and the Antichrist becomes Christ when, right down to a spread-armed death posture and the transmittal of salvation in the form of his blood, he is accomplished.

Highlights: Anthony Zerbe’s wonderful turn as Brother Matthias, head of the mutant patrol. His mellifluous voice lingers over phrases such as “Ill-YOO-shun” and “Heah is the in-stroo-ment of KLEN-SING, my brethren!” And the happy pseudo-mariachi music that plays over the credits. Makes you think the survivors are going to Cancun for spring break. Kind of cheers you up a tad.

By the time Heston gets to Soylent Green, he’s the Alpha Male as Nonentity. He’s just a police detective in an overcrowded future Manhattan, investigating a murder that leads him to discover that man’s food supply, for reasons of cost-effectiveness, has become mankind itself.

Richard  Fleisher’s direction is top-notch, and the message here is blunt – the rich eat the poor, a metaphor not built on until Brian Yuzna’s bizarre and disturbing horror film Society 16 years later. When at the end Heston’s character Thorn screams out the famous line, “IT’S PEOPLE! SOYLENT GREEN IS PEOPLE!” he’s wounded and is being taken away by other policemen – led by the very police captain (the magnificently crabby Brock Peters) who was bribed to get Heston off the case to begin with. It seems a safe bet to assume that his warning will never make it to official channels. Charlton Heston, the ultimate Cracker, is about to be processed into one.

Highlight: Edward G. Robinson, in his last role – he died 12 days after completing it. A medium supporting role, a trifle, really, in a typical genre film. But he gets every bit of nuance out of it, commanding the eye when he’s onscreen. It’s even more impressive to see his timing in repartee when you learn he was almost stone-deaf when he performed it. And his last scene is his death scene. There are no small parts.