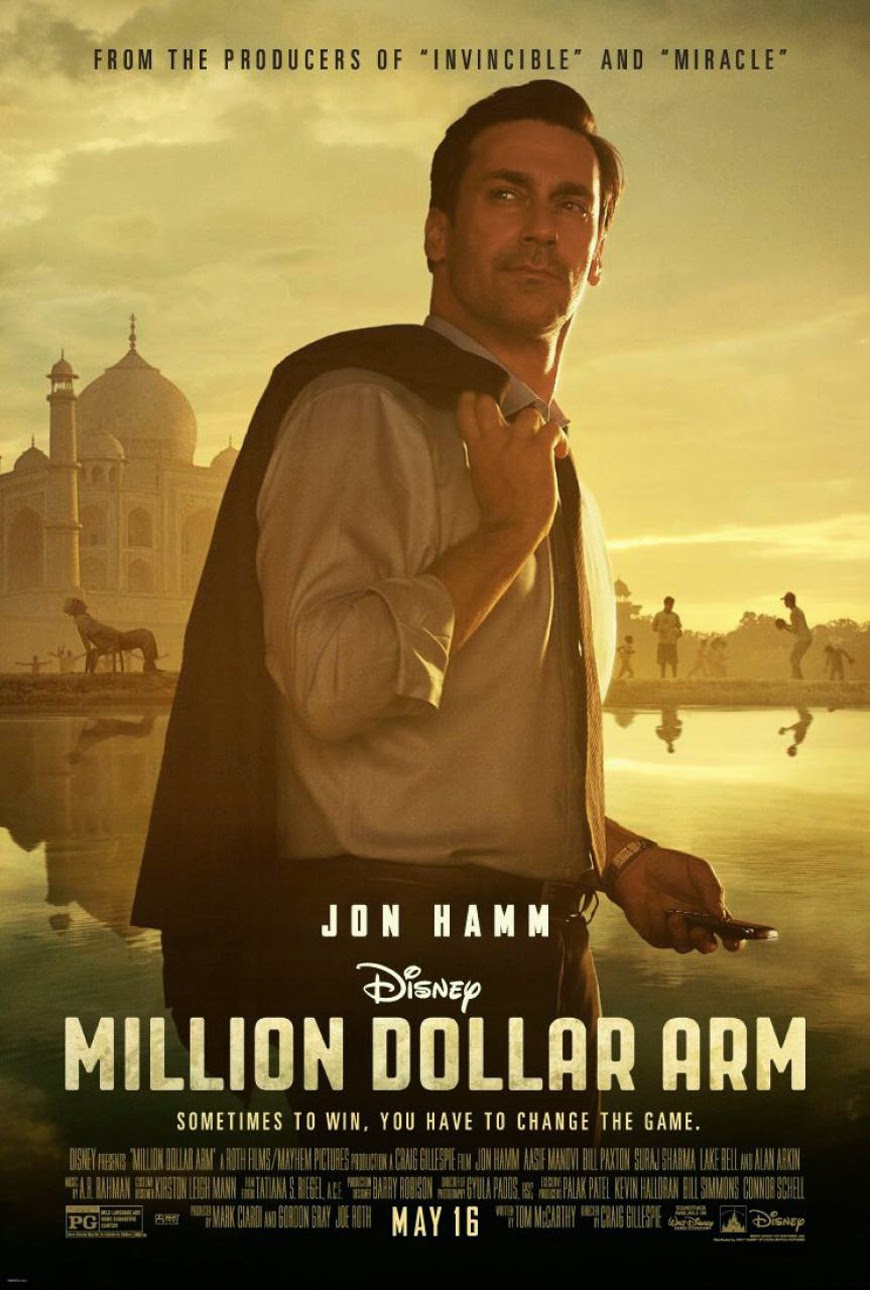 Feel-good story. Triumph over the odds. Underdog wins it all. Bitter central character learns about what’s important in life in the process. Fishes-out-of-water make it in the Big Time. Redemption.

The inspirational sports film of the summer, “Million Dollar Arm,” is out, and it is sappy. And predictable. So what. I like that.

Tom Russo of the Boston Globe points out in a May 24 story, accurately, that facts were altered in some of these “based on a true story” scenarios in order to make with the happy ending.

This formulaic approach has been practically patented by Disney producers Mark Ciardi and Gordon Gray, who to date have turned out “The Rookie,” “Miracle,” “Invincible,” and “Secretariat.” Hey, do you notice a pattern here?

In “Million Dollar Arm,” the central character is not either of the struggling hopefuls (amateur athletes from India, completely unfamiliar with baseball, who seek to become Major League pitchers and win big money), but a canny spots agent – the kind we have been culturally trained to boo. The likeable John Hamm, the only figure on the film’s poster undoubtedly due to his testing well with potential audiences due to his visibility as the central figure of the hit TV series “Mad Men,” is plays the real-life J.B. Bernstein, who created “Million Dollar Arm” as a far-fetched promotional scheme to right his small struggling sports-promotion company’s fortunes.

He goes hunting for candidates across the Subcontinent, with cranky but lovable baseball scout Ray Poitevint (Alan Arkin) in tow. He comes up with Ringku Singh (Suraj Sharma, “Life of Pi”) and Dinesh Patel (Madhur Mittal, “Slumdog Millionaire”). His relentless drive alienates not only his charges, but their trainer Tom House (Bill Paxton), translator Amit (Pitobash, who teeters on the edge of Indian stereotype but pulls himself back), and potential humanizing agent and love interest (Lake Bell). Of course, Bernstein pulls his head out of his ass, becomes a good guy, learns to care, redeems himself and his two players, and secures a chance for a future for them. And gets the woman.

Craig Gillespie’s direction is efficient, and that’s all it needs to be. We are working with a template here, so all we need to do is to stay close to our characters and develop emotional connections to them. It works; I cried several times -- as I always have and will during a Ciardi/Gray production (in fact, a scene of Hamm and Bell tearing up while watching Gary Cooper deliver Lou Gehrig’s “luckiest man” speech in “Pride of the Yankees” points to the ubiquity of the choke-up moment in films such as this).

Those who stick around for the credits will see a wealth of still and film footage of Bernstein and his protégés taken at the time of the original events. It almost seems that “Million Dollar Arm” was conceived with an eye to the post-event creation of a based-on-a-true-story Disney sports film, preferably produced by Ciardi and Gray.

This putative, blatant sculpting and control of a real-time endeavor to serve the marketing scheme of its creator does raise the question of ethics. Did the “real” Bernstein think of this project in terms of Inciting Incident, First Act Break, Midpoint, Point of Commitment, the “All is Lost” Moment,  Climax, and Resolution? Did he sincerely undergo a transformation of character? If he didn’t, is “Million Dollar Arm” a failure? (Bernstein, in fact, didn’t hatch the contest – venture capitalist Will Chang – played by Tzi Ma in the film -- did. Read the complete rundownhere at the excellent ‘History vs. Hollywood’ site.)

I say no. Certain storytelling techniques work because they touch us. They speak some kind of truth about us to ourselves, even if they are fantasies. As Russo points out, the “real” Dinesh Patel has spent his career in Class A ball, and Ringku Singh left the game altogether. Anyone who has survived to child-rearing age knows that there are no fairy-tale endings.

Still, we read our kids fairy tales. Why? Well – who wouldn’t have opted for that big break, or just the experience of giving it your best shot? How is that not an essential virtue to learn, even if it’s retailed to us by the none-too-altruistic? Who doesn’t enjoy feeling that feeling vicariously in the darkened auditorium? We leave the film pumping our fists and feeling triumphant, just as our protagonists do. True, in real life, these perfect moments of redemption don’t last long, and are usually succeeded by difficulty, complexity, loss, regret, and the sheer everydayness of human life.

It doesn’t mean that it’s not a good dream to dream, or a good goal for which to strive. We go to movies like this to remind ourselves that this is so. And I will be watching it and the other inspirational sports films of Ciardi and Gray for some time to come.