"Paris: The Luminous Years: Toward the Making of the Modern" 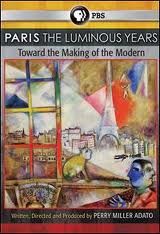 "Paris: The Luminous Years: Toward the Making of the Modern"
Written, Directed and Produced by Perry Miller Adato
2010, 120 min.

What makes a certain time, a certain place a center of creative ferment?

Paris is emblematic of the idea of an artistic scene, if not a cliché of it. In the documentary “Paris: The Luminous Years,” Perry Miller Adato has constructed a clear and compelling collage of testimony that wipes away many accreted perceptions of this revolutionary era.
Adato targets the years 1905-1930 in the City of Light, although the period could conceivably be expanded to cover the tail of the 19th century and most of the 1930’s. A somewhat stable political climate, affordable living conditions, and a cultural establishment ready to be shocked paved the way for a group of uncompromising artists to grow and thrive. (Credit also the urban renovations of Haussmann, fading memories of the destruction of the Paris Commune, and the belated but overwhelming success of the Impressionists.)
Starting with the visual artists – Picasso, Gris, Braque, Chagall, Modigliani and Soutine, to name a few – the fervor spread to the musical world. Erik Satie’s pioneering avant-garde music led the way for the (reluctant) acceptance of Stravinsky, Poulenc, Milhaud and others. In dance, the work of Sergei Diaghilev and his Ballets Russes; in literature, the experiments of Apollinaire, Jacob, Stein, and Joyce; in film, the collaborations of Bunuel, Dali, and many others who simply picked up cameras and shot away – all contributed to the explosion of old values and the installation of the “perpetual revolution” of modernism that still affects the culture today.

To Adato’s credit, the two-hour film chooses clarity over density and concrete details over sweeping statements. “Paris” combines neatly contextualizing contemporary footage and the usual array of talking heads and period photographs.
Its real strength, though, is the integration of carefully researched and well-chosen archival testimony from participants of the era, as well as a cornucopia of images and sounds created during the time. (Surely no period in art history has produced as many memoirs; it seems that the contemporary primacy of self-consciousness and self-promotion was born during this time as well.)

The result is a vivid evocation of what it was like to live and work in that time and that place. The severe irruption of World War I only accelerated the pace of innovation and questioning. Even the “Lost Generation”’s iconization of the city, and its subsequent takeover by American cultural tourists and posers in the 1930s, only slightly blunted its impetus. Only the flight from fascism, which scattered its leading lights or forced them into silence, could break the spell.
That Paris is gone. The romantic who wanders the streets of Montparnasse and Montmartre today will see not the rustic Bohemia of that time, but the office buildings and high-priced apartments that always seem to displace the scruffy, avant-garde colonizers of unappetizing real estate. “Paris” opens a window to a time that becomes more mythical with each passing decade.


Brad Weismann writes about anything and everything cultural; he is working on a continuing historical series, "Paris on Film."
Posted by BradWeis at 5:59 AM